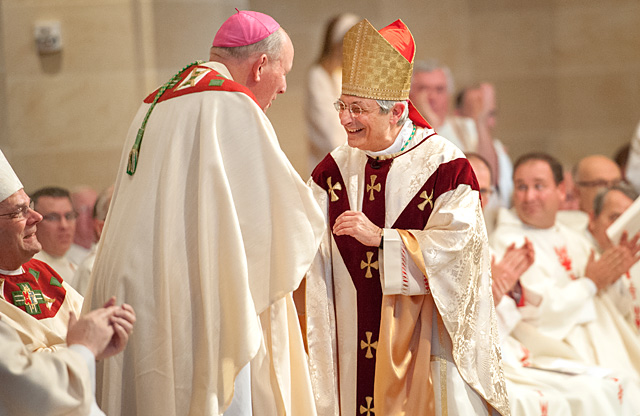 ROCHESTER — At exactly 3 p.m. on Jan. 3, with applause from a full Sacred Heart Cathedral ringing through the air, Bishop Salvatore R. Matano took his seat in the cathedra (bishop’s chair), officially marking the beginning of his role as the ninth Bishop of Rochester.

Bishop Matano had declared acceptance of his new see less than a minute earlier, saying, "I resolve to serve faithfully the spiritual needs of this local church." Just prior to that, Archbishop Carlo Maria Vigano — apostolic nuncio to the United States — read aloud Pope Francis’ apostolic letter of Bishop Matano’s appointment, dated Nov. 6, releasing him from his duties as Bishop of Burlington, Vt., where he had served the previous eight years.

The installation Mass was the first in Rochester since 1979, when Bishop Clark began his 33-year tenure. Numerous bishops, cardinals and archbishops from across the country, as well as diocesan clergy, were among those in attendance on Jan. 3. The number of out-of-town visitors was slightly depleted due to harsh weather conditions that forced cancellation of travel plans, including those of Cardinal Timothy M. Dolan of New York, who was to have served as presiding prelate.

In his first homily as head of the Rochester Diocese, Bishop Matano — the liturgy’s principal celebrant — alluded at times to the wintry weather. Noting that in 2005 he was ordained to the Diocese of Burlington within an hour of Pope Emeritus Benedict XVI’s election as pontiff, he said, "You see, it was indeed a memorable day. So I asked, how could I make today memorable? I looked to the heavens and said, ‘Let there be snow.’"

Also during his homily, the 67-year-old native of Providence, R.I., thanked people who have supported him through the years, including family, friends, brethren and people of the Burlington Diocese. In expressing enthusiasm for his new home, he took special note of Bishop Clark, extending the bishop emeritus his thanks for having "so warmly welcomed me to this diocese in his usual kind manner."

"Your Excellency, you are a true canonical icon of stability in this office," Bishop Matano added, setting off a large round of applause for Bishop Clark.

Bishop Matano also paid tribute to the many priests surrounding him, saying, "Let us remember that without the priesthood, there is no Eucharist. And without the Eucharist, the Catholic Church loses its identity."

He noted the importance of other vocations, such as religious orders and the married life. Bishop Matano emphasized the key role all Catholics play in strengthening the church — something he said is badly needed in this day and age. He remarked that today’s culture is often marked by indifference and even anger toward the Catholic faith — a drastic change from the 1950s, when Catholicism in the United States thrived on many levels.

"I’m not the only Catholic in this diocese. If I have challenges, then we all have challenges. It is the responsibility of every baptized Catholic to fulfill faithfully what Christ asks of us," Bishop Matano said, stressing the importance of regular attendance at Sunday Mass: "All that we do as a people of faith stems from our attachment to the holy Eucharist."

For those who are estranged in some way from the church, Bishop Matano implored, "Please come home. This is not the plea of Bishop Matano — this is only his voice echoing the voice of Jesus."

Bishop Matano concluded his homily by asking Catholics to practice evangelization — "because we are called to love another, we must tell them the truth of our Catholic faith" — and to defend life and "the dignity of every human person from the moment of conception until natural death."

Following Communion, Bishop Matano formally appointed Father Joseph Hart — the longtime vicar general under Bishop Clark — to the same position under his see, noting that this marked his first appointment as Bishop of Rochester. He also announced that Msgr. John McDermott, his chancellor in the Diocese of Burlington, had been appointed apostolic administrator there that day.

Moments later, as Rochester’s new bishop slowly processed down the cathedral’s center aisle while the Diocesan Festival Choir sang "Hark the Herald Angels Sing," he waved his right hand in blessing as worshipers made the sign of the cross in return.