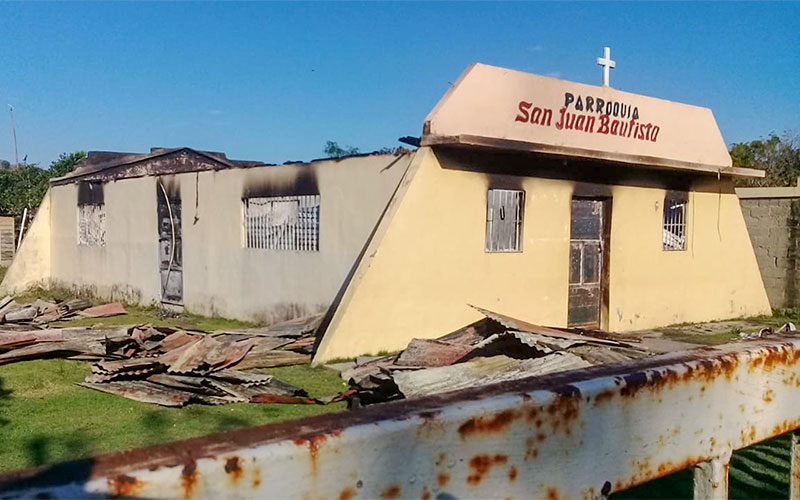 The fire that tore through San Juan Bautista Church in the Dominican Republic town of Don Juan on Jan. 17 did more than destroy the only Catholic place of worship in the town. It reduced to a shell what previously had been “the heart, the center” of Don Juan’s Catholic parish, according to Father Ron Gaesser.

“It was a complete and total loss. Everything was burned and destroyed, incinerated,” remarked Father Gaesser, a priest of the Diocese of Rochester who lives in the Caribbean nation for part of each year.

Father Gaesser, who reached senior status in 2003, for decades had regularly presided at Mass in the Don Juan church, where several of his own belongings, including vestments, were destroyed.

“The chalice my parents gave me for my ordination was incinerated,” Father Gaesser said.

The loss of the church was even more devastating for Don Juan’s Catholics, and understandably so, he added. The parish is made up of 16 communities with Don Juan in the center, and the parish activities radiated out from the Don Juan church like the spokes coming from the hub of a wagon wheel, Father Gaesser explained.

“In the village of Don Juan, it is the center of the people’s faith, and they are very much grieving the loss of the church,” he said. “If you would go to your church and found the only things standing were the walls, what would your reaction be? Everything is destroyed, everything is gone.”

Despite their grief, the people of Don Juan will “take a deep breath and go on” and are planning to rebuild the church, Father Gaesser said. Preliminary plans call for the rebuilt church to be larger than its predecessor, with seating for approximately 400 people as opposed to the 200-person capacity of the previous church, he said.

There is no way, however, that the parish can afford to construct a new structure of any size, let alone one larger than the original, Father Gaesser said.

“The parish is not the poorest of the poor, but they certainly can’t come up with the resources to build the whole thing,” he explained. “It can only happen with outside contributions.”

This is where local Catholics come in. Father Gaesser spent the first part of February asking for help from parishioners in the Finger Lakes and Southern Tier regions of the Diocese of Rochester. Through bulletin notices, personal appeals from the pulpit and special collections taken up during weekend liturgies, Father Gaesser appealed to members of Holy Family and Sacred Heart parishes in Auburn, St. Ann Parish in Owasco and St. Catherine of Siena Parish in Ithaca.

Many of the members of those parishes already share a bond with their fellow Catholics in Don Juan. Since 1999, St. Catherine has had a sister-parish relationship with San Antonio de Padua Parish and its El Portal de Belen nursery school in Monte Plata, which is located just 40 miles from Don Juan. This connection was inspired by Father Gaesser, who served as pastor at St. Catherine before reaching senior status and becoming a parish priest at San Antonio de Padua. For 20 years the Ithaca parishioners have supported the Dominican parish both through financial contributions as well as mission trips to Monte Plata.

Parishioners at Sacred Heart and St. Ann, meanwhile, have been connected to Dominicans in Don Juan since 2000 through the parishes’ Mission From the Heart project. Auburn parishioners make regular mission trips to Don Juan, and parishioners currently are supporting more than 80 students at the San Juan Bautista school, according to Pat Messina, who coordinates the project’s Sponsor A Student initiative.

Messina, who has traveled to Don Juan twice, said she was devastated to learn of the fire in San Juan Bautista, where she and her fellow pilgrims from Sacred Heart and St. Ann attend Mass while they’re in the Dominican Republic.

“Church means everything to them,” Messina explained. “That’s where they come together as a community. That’s where they went when they wanted to see each other, sing together, attend Mass.”

“It was the only Catholic church in the community,” added fellow Sacred Heart parishioner Ed Galka, who founded the Mission From the Heart project. “This was the stronghold for the Catholics that held them together.”