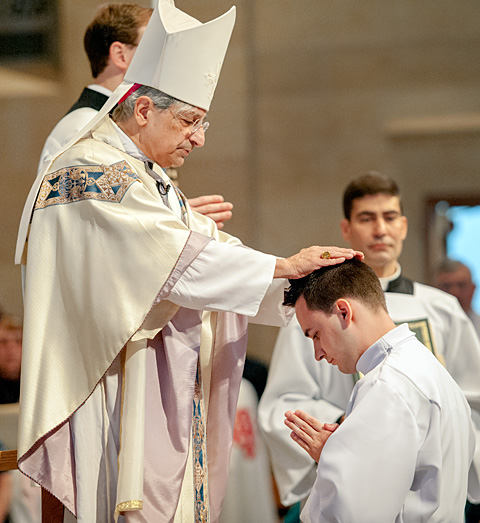 One man is a former music instructor. Another is a retired grandfather. Two others hail from Colombia.

The diverse paths of this quartet — Deacons Michael Fowler, Matthew Jones, Daniel Ruiz and Carlos Sánchez — have led to a singular destination. On June 20 they’ll be ordained at Rochester’s Sacred Heart Cathedral by Bishop Salvatore R. Matano, becoming the newest priests for the Diocese of Rochester.

How have they reached this point, responding to their vocational calls by willingly meeting numerous requirements? Carol Dady, diocesan coordinator of priesthood vocations awareness, said there’s no one, definitive answer. Rather, she said, discerning a priestly vocation is a development to which only God and each seminarian are privy.

"It’s still a mystery to me how a vocation comes about," she remarked.

Even so, the four men about to be ordained offer compelling clues. All say they were strong in their faith as youths. All cite positive influences — priests, women religious, parishioners, family, friends, fellow seminarians. In fact, as Deacon Jones looks ahead to ordination and the celebration of his first Mass on June 21 at Elmira’s St. Mary Southside Church, he anticipates the thrill of seeing many supporters in the same place at the same time.

"It will be my life flashing before my eyes, a sea of people from my past," he said.

Key folks from that sea will be family members and the parish priests of his youth, Deacon Jones noted.

"My family has been supportive of my vocation pursuit since the beginning stages. Their support has been unfailing, as it has been throughout my life. I wouldn’t have made it without them," said Deacon Jones, 32, who worked as a parish music director and Catholic-school music teacher upon graduation from college.

Speaking of family influence, Deacon Sánchez described his mother as "the first promoter of my vocation," noting that she once spent two years in a Colombian convent before ultimately committing to the vocation of marriage.

"When I tell people about this story, they always think of how God works his will upon us. He didn’t want my mom to consecrate her life to him, but her son — and here I am, the first priest of the family," Deacon Sánchez said.

Another early-life influence came in the form of a homily by a faculty member when Deacon Sánchez was attending high school at Conciliar Seminary in Medellin, Colombia. The priest homilist noted that there are many career paths through which laypeople can help others and teach the faith. However, "He asked the question that was crucial for me: What does a priest can do that nobody else in the world can do?" Deacon Sánchez recalled. "The answer was, to celebrate the Eucharist. This homily really encouraged me to keep my desire to be a priest."

At age 27, Deacon Sánchez is the youngest in the priestly Class of 2015. The senior member of that class, by a wide margin, is 60-year-old Deacon Fowler. He likewise entertained thoughts of becoming a priest at an early age, recalling that as a child he would pretend to celebrate Mass in his Owego home — "The Cathedral of 19 Armstrong Place," he quipped.

Instead, however, he married, had two children and began a career. After he divorced, he began reading about the Blessed Mother’s apparitions and "a genuine spiritual rebirth began," Deacon Fowler said. Then, 14 years ago, after saying the rosary with him a close friend said Deacon Fowler should have been a priest.

"I considered myself from that moment on to be in discernment," said Deacon Fowler, who in 2009 retired from IBM/Lockheed Martin — where he was a quality engineer — to begin formal pursuit of the priesthood.

Deacon Ruiz, also, had a pivotal point in his discernment, which occurred when he was a teenager in Medellin. During a difficult period of his life, he sought out a quiet place to talk to Jesus "as I would to a friend," he said.

"I found a loving God, that even though would not fix all my problems was willing to walk with me and guide me through them and to love me always no matter what," said Deacon Ruiz, 33. "After this experience I knew I had to do something for God — not to repay God’s love, which is not possible, but to live and share this love."

Deacon Ruiz responded by serving with the Jesuit order in many rural, poor communities in Colombia.

"I found God as present in the poor and serving them as I have found God present in prayer," he said, and from there he saw his priestly vocation more clearly.

All four of the soon-to-be priests eventually entered Becket Hall, the diocesan pre-theology program, and went on to seminary. Deacon Fowler has studied at Pope St. John XXIII National Seminary in Weston, Mass.; Deacon Jones went to St. Mary’s Seminary and University in Baltimore; and Deacons Ruiz and Sánchez went to Theological College at Catholic University of America in Washington, D.C.

Dady observed that the vocation for which these men have readied themselves stands apart from other professions.

"They’re preparing for a way of life, for the rest of their life — not for a particular career that could change again, where they can go back to school or change jobs," she said.

Included in their commitment is the vow of celibacy as well as the promise of obedience to the local bishop, which may well mean taking on a variety of assignments over the course of one’s priesthood.

"You’re not permanently rooted to one place, the way somebody raising a family would be," Dady said. "The people that you’re serving become your family."

Key exposure to a parish family occurs during a seminarian’s pastoral year, which typically takes place after the second year of seminary. Deacon Fowler served his pastoral year at St. Joseph Parish in Penfield; Deacon Jones, at Our Mother of Sorrows in Greece; Deacon Ruiz, at Our Lady Queen of Peace/St. Thomas More in Brighton; and Deacon Sánchez, at St. Louis in Pittsford.

"We think it is huge," Dady said of the pastoral year’s importance, noting that many current priests have shared with her how vital it is to get such an in-depth look at what actual priestly ministry will be like.

Deacon Jones said that in his pastoral year and in other parish assignments, "I have met and remain in contact with people who showed me their heart’s desire to follow the Lord more closely."

Dady added that Deacons Ruiz and Sánchez have been "very well-liked in the parishes they’ve served; they’ve made many attachments with family and staff." She said this is significant since they’re so far away from home. The two men are among the seven Colombian seminarians in the Diocese of Rochester who represent nearly half of the 16 current seminarians here. Under a special arrangement between the Rochester Diocese and the Archdiocese of Medellin, the Colombian men will serve their entire priestly ministry in this diocese — what Deacon Sánchez described as "the opportunity to be a missionary priest and proclaim Jesus’ teachings in this specific culture."

"I am very grateful to the communities in the diocese that have welcomed me and nurtured my vocation," Deacon Ruiz said, saying he’s thankful for the many local friends "who have supported me every step of the way."

In addition to human support, Deacon Fowler observed that reaching ordination day — in his case, a quest that’s taken more than a half-century — wouldn’t have been possible without the guidance of God.

"Through the incredibly generous outpouring of God’s grace and mercy in my life, that journey is rapidly coming to fulfillment," he said.