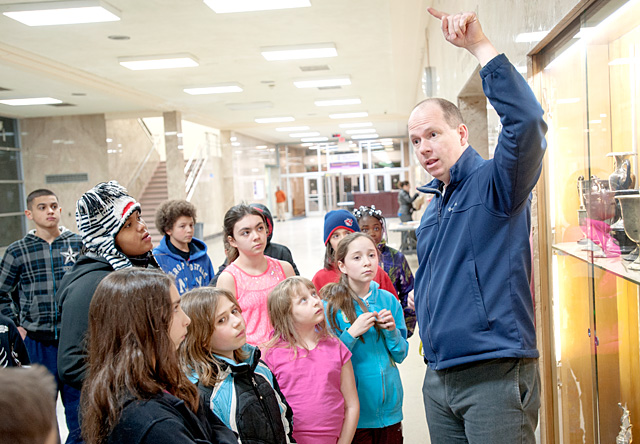 ROCHESTER — Shalonda Garfield believes so strongly in the potential of the University of Rochester’s partnership with East High School that she knocked on doors during freezing temperatures this winter trying to recruit students for the school.

"They really know what they’re doing," Garfield, a fifth-grade teacher at Flower City Community School No. 54 who has applied to work at East, said of the university. "I definitely believe in their leadership."

The partnership with UR was officially approved by the state education department in a Feb. 11 letter from Elizabeth Berlin, acting commissioner, to Rochester City School District’s board president Van White. The approval included a one-time $200,000 School Improvement Funds grant.

Last year, after three years of East High failing to improve academically, state education officials gave the school district several options, which included closing the school or finding an education partner organization (EPO) to take over school administration. After the UR offered to create a partnership to save East High, a team was formed to study the idea, explained Stephen Uebbing, an educational leadership professor at UR Warner School of Education who will serve as East’s superintendent. He said that several key conditions were set by the university, which wanted to hire its own staff, develop its own budget, and create its own curriculum and school day.

As part of the process, all staffer members at the school — from maintenance to administration — have had to reapply for their jobs, explained Susan Meier, a visiting professor at the Warner School and East’s chief academic officer. The university will officially take over operations this summer.

University officials explained how the partnership will work during a Feb. 25 workshop at the school, one of several held in recent months to inform parents about the changes and encourage them to register their children at East.

The changes include adding a sixth grade and creating a ninth-grade academy on the existing campus on East Main Street, said Meier.

The school won’t succeed, however, without buy-in from staff, students and families, said Meier to the more than 30 families that attended the Feb. 25 workshop and open house. The school’s motto is "All in … all the time," added Uebbing.

Proven strategies for academic success include providing a high-quality, engaging curriculum with an increased focus and clarity on what students will learn. There will be collaboration between staff and students and meaningful assessments, she said, noting that teachers also will receive continued professional development.

During his March 23 budget presentation for the 2015-16 school year, Superintendent Bolgen Vargas said that the district is planning to invest an additional $9.8 million to revamp East High. The funds will cover the cost of adding 12 reading teachers and extending the school day to 7.5 hours.

"We’ve been discussing this for quite some time … since we put out a call for a university to help us," he said.

He added that the literacy component is one of the most important aspects of the new model.

"No district can get anywhere on (academic) achievement if we don’t work on reading," he said.

The university has been working on creating the instructional model strand by strand, explained Joanne Larson, chair of the Warner School’s teaching and curriculum program. The school’s successful programs, though, will remain, including its culinary and teaching institutes and its optics and technology programs, Meier said. A health and medical strand also may be added, she said.

"We want to provide the highest quality instruction possible that a student can be engaged with," she said.

"We are going to create history here," noted Larson, who also is leading community involvement. "East will be the model."

An EPO model that’s been in place for almost three years in Baltimore, Md., is proving that such a partnership can succeed, explained Katrina Foster, principal at Elmer A. Henderson: A Johns Hopkins Partnership School.

The school is different from East, though, not only because it is for grades K-8 but also because it has been open since 2009, she said.

But the school’s personnel do work hand in hand with professors from Johns Hopkins to develop curriculum and extracurricular programs, Foster added. The university also obtained a grant to operate an early childhood center at the school, and its nursing school oversees a health center, she said.

And the students are making progress, Foster noted. When the university entered the partnership to operate the school in 2011, 39 percent of its students read at grade level. Currently, that number is 72 percent with a 96 percent attendance rate, she said. Those numbers are significant, considering the lower socioeconomic status of the students, with 95 of the students receiving free or reduced lunch, Foster said.

"The key word is growth," Foster said. "And partnership is the best way to describe it (the school model). … It’s not that a university is going to come and fix something. We’re working together to create something great. That’s most important. Everybody has to be involved."

To foster such involvement at East, university staff members also plan to invest in developing personal and group leadership skills schoolwide for students, teachers and families.

"We want our families to be sharing in the decision making, not just be people we talk to," Meier said.

Such input is vital for school officials because not all students come to school ready to succeed, she said.

"You know your child better than we do," Meier said. "We need to hear from you about what you’re looking for and how we can provide that."

Haydee Méndez-Santiago said that she liked what she heard at the open house. She is considering the school for her 11-year-old daughter, Petra Méndez, who currently attends Rochester Prep. She especially liked the sense of family the university is looking to build, she added.

"We’re looking for something better for her where she can feel more comfortable and learn," said Méndez-Santiago.

EDITOR’S NOTE: For more information or to register a student at East High School, visit http://www.ureasthigh.org.