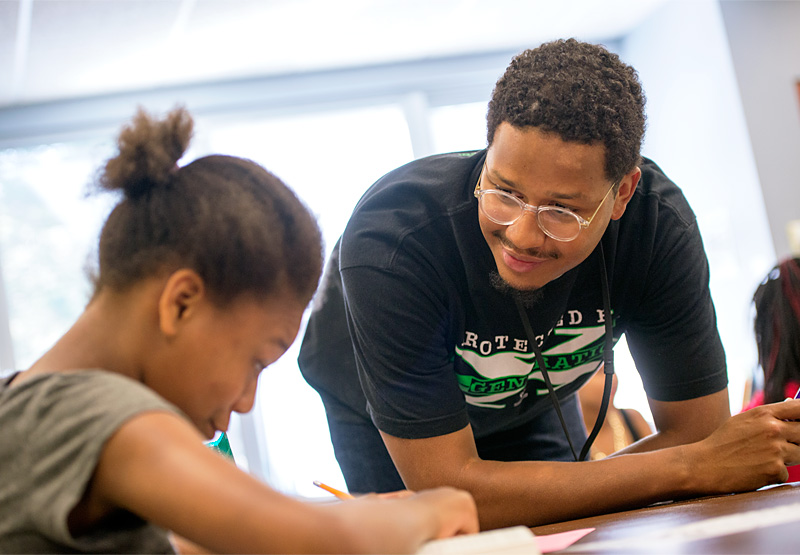 ROCHESTER — Talking about sensitive topics with students is something Michael Harris takes seriously as he pursues a career in education.

When their smartphones or television screens expose students to images of violence around the country or in their backyards, teachers should play a role in helping them process those images or put them in the context of history and current events, according to Harris and a local school administrator.

Harris, a Howard University student entering his senior year, is teaching in the summer-learning program at the Freedom School in Rochester City School District’s Charles T. Lunford School No. 19. He came to the school through a fellowship with Uncommon Schools, a national organization that partners with local school districts to offer teacher training to students of color in their junior years of college and to increase the diversity of teacher populations in urban schools. The program also provides its fellows with mentors who help them address situations that may come up in the classroom, including students’ feelings on such topics as racism.

"As a teacher, as a black man, and having students who are minorities, I feel as if these are conversations we need to have," Harris explained in an e-mail. "I want to create a place where students can talk about the things that affect their lives on the day in and day out basis. One of the pillars of (the) Freedom School is discussion, and in my classroom, I truly try my hardest to further the conversation and make it relatable because it engages the students much more. … Freedom School is not only attempting to build intelligent young adults; we also want to make them better people by the end of the program so they can pass on the tools needed in order to make a community better."

One of those tools is civic engagement, Harris said during a July 19 session, as he prepared his middle-school-age students for a visit from local elected officials the following day. Some of the students said they felt such officials don’t care about them because they are not white, and others said they don’t feel police protect them.

Harris responded by talking to the students about the Black Lives Matter movement.

"This (police behavior) is an issue that’s been weighing on them heavy," he noted. "So, I thought, ‘I want someone (like an elected official) who is in the so-called system to hear a firsthand account of how it effects today’s youth mentally.’"

He raised a discussion of Black Lives Matter because — as a black man who grew up in an environment similar to that of his students– he has valuable insight to offer them, explained Djinga King-St. Louis, principal of the Freedom School and head of cultural awareness training for the district’s partnership with the Uncommon Schools’ program.

Discussing recent national headlines about people suffering injury and death while in police custody also was a way to stimulate the participation of students who are sometimes difficult to engage, she said.

"Not everyone can have frank conversations with young people with sensitive questions," King-St. Louis said. "By sharing his life, (Harris was) hopefully making a connection with his students."

Having established a rapport with the students, Harris said he is not trying to influence their thinking but instead to create a space where they can vent their frustrations and find ways to bring about change.

"Middle schoolers need someone who will give it to them straight because they are about to enter a whole new monster in high school," Harris said.