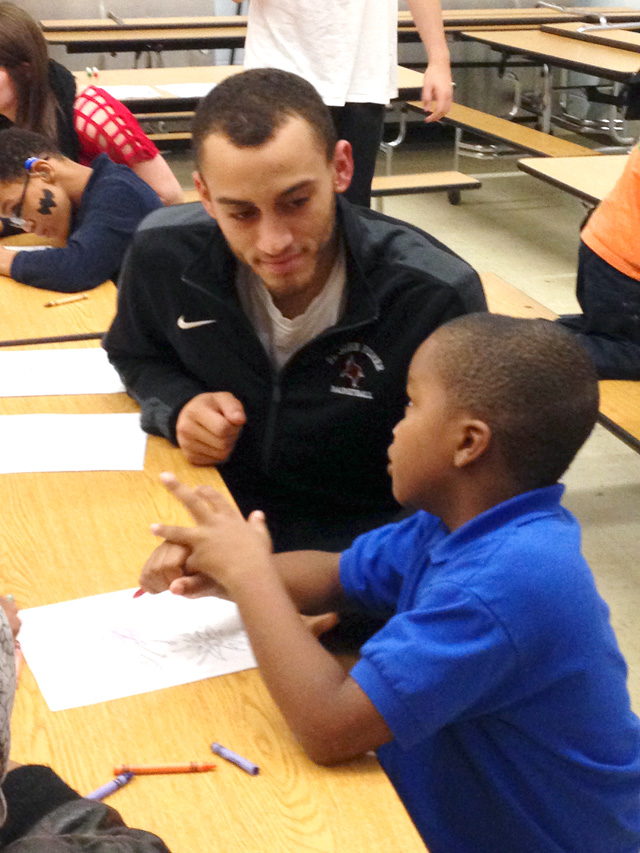 Trish Dillenbeck always did well in school and thought about going to college.

But as the eldest of two children in a family whose parents didn’t attend college, she wasn’t sure if going to university would be in the cards for her.

"I saw older cousins go to college," added Dillenbeck, who went on to graduate from St. John Fisher College in 2006. "The question was, ‘How do you do it? What does that look like?’ You just don’t know as a first-generation (college student)."

Counselors and teachers didn’t offer a lot of guidance beyond suggesting universities to check out, she recalled. But luckily for her, she said, St. John Fisher was among the suggestions. And when she toured the campus, she met with a professor who advises students in the college’s First Generation scholarship program, Dillenbeck said.

"He’s the one who cleared the way and walked me through the process of getting into college," she said.

Yet even after she navigated the complicated admissions and financial-aid process, doubt and anxiety set in, explained Dillenback originally from Little Falls in Herkimer County.

"It was hard since we’re very family based, as a lot of first-generation kids tend to be," she said. "Unpacking my dorm room, I wanted to pack up and go back home."

But after her initial meeting with other students who also are the first in their families to go to college, she soon felt at home and a part of "the Fisher family," she said.

St. John Fisher is one of several local universities — such as University of Rochester, Rochester Institute of Technology, SUNY Brockport, Nazareth College and Monroe Community College — that provide scholarships for first-generation students. Established in 1999 by the Constantino family, Fisher’s First Generation scholarship program has produced more than 300 graduates, said Sally Vaughan, director of the college’s Community Service Office. And the Farash Foundation is one of the local foundations that annually awards "First in Family" scholarships in partnership with such schools as UR, Roberts Wesleyan College and Nazareth College.

Attaining a college degree is increasingly crucial for all students, experts said. More than two-thirds of all jobs will require postsecondary education and training by the year 2020, according to a report from Georgetown University’s McCourt School of Public Policy (http://bit.ly/1lT8OHa).

An estimated 30 percent of students enrolled in postsecondary institutions are low-income, first-generation college students; 20 percent of these students are African-American, and 23 percent are Hispanics, according to information from the "I’m First" initiative of the national Center for Student Opportunity (http://bit.ly/2aqmky0).

In addition to several First in Family scholars, most students in the Educational Opportunity Program (EOP) at SUNY Brockport are first-generation college students, said Randall Langston, assistant vice president for enrollment management. About 20 percent of Brockport’s more than 6,800 undergraduate students identify as first-generation students, he said.

The university retains 81 percent of these students from freshman to sophomore year, Langston noted. He said this retention rate is made possible through support services offered by the university, particularly from the EOP staff. The EOP provides advisement, tutoring and counseling as well as a pre-freshman summer orientation program for its students.

Nearly 90 percent of first-generation students will not have earned bachelor’s degrees six years after high school, according to the "I’m First" report. They drop out of college for such reasons as their parents’ inexperience with the college process and a lack of community support for their higher-education goals.

"When you see kids not succeed in college, it’s because they’re floating by themselves," Dillenbeck said. "(At St. John Fisher), they make sure day one, that’s not the feeling that you have."

As first-generation students themselves, Owens said he and his staff are role models for how getting a degree offers a boost in the potential earnings of any individual and can improve the lives of family members as well. After he became the first in his family to obtain a college degree, his brother and sister followed, and all of Owens’ four children graduated or are attending college, he said.

When he speaks to local legislators about why they should continue funding for programs like EOP, Owens speaks from his own experience.

"I’ve been a taxpayer for 35 years now," he said. "I could have been dependent on taxpayers, in jail or on welfare. I paid back 100-fold what you paid for me to go to college. To ask if the program is worth it? I’m an example of the value."

"We have them employed in all sectors," she said in an e-mail. "And we find that many of them are continuing to ‘give back’ to their home communities by serving on boards, speaking to Fisher undergrads, interviewing for the next class of scholars and many other ways at their work."

Dillenbeck said she knows she wouldn’t have established a career as a communications professional — first at Buffalo State College and now at a national honor society in Rochester — without her undergraduate experience at St. John Fisher, which also set her up for graduate school. She received her master’s degree in higher education administration from SUNY at Buffalo in 2008.

"It just opens your world up so much more," she said of a college degree. "And I have focused my career on leveling the playing field so (all students) can succeed. That’s what was done for me."