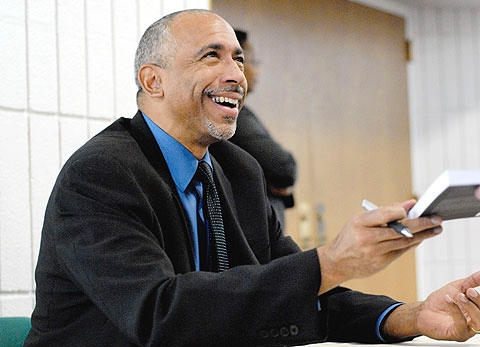 ROCHESTER — The picture for Latino boys in America appears bleak — more of them in the prisons of several states than in those states’ colleges or universities, many entrenched in gang life or forced to drop out of school to support their families.

"We incarcerate more people in this country than any other country in the world at any time in history," remarked Pedro Noguera, Peter L. Agnew Professor of Education at New York University, during a presentation last month at Nazareth College. "And every dollar spent to incarcerate is a dollar we don’t have for education, health and all other public needs that we have in this country."

But there is hope, he said. Effective intervention strategies have been proven to boost the number of Latinos finishing school and moving on to higher education, he added. Those strategies include providing safe school environments, engaging students with dynamic classes and offering full inclusion through such positive activities as sports or arts, Noguera said.

Noguera addressed a group of educators, community members, college officials and parents March 8 as they continue the task of redesigning Monroe High School to create a new culture and improve the overall academic achievement of Latino students there. The event marked the third in a series of summits on Latino education that have taken place at Nazareth.

The needs of Hispanic young men are not only academic but social and environmental, Noguera explained. Young Latinos are more likely than any other group to drop out of school and, as a result, more likely to become trapped in low-wage jobs. They often are excluded from programs that promote achievement and positive social development, he said, because educators and employers hold biases against them based on negative stereotypes. Boys that come from immigrant families often have to make the hard choice of school or working to help support their families, he added.

Working on the front lines as a social worker and mental health advocate for students at Monroe, Carmen Garcia has become quite familiar with the picture Noguera paints. For new initiatives to work, she said, parents must trust the district and — given the many factors Noguera listed as contributors to a decision to leave school — the community must be careful not to negatively judge drop outs.

"I hear the plight of parents, teachers, leaders, everybody," Garcia said. "I’m trying to be the bridge for all those needs to be met."

Building relationships with families to foster trust and commitment to improving the future of their children is also part of Rochester’s Latino Education initiative, which began three years ago, district officials said. An initial summit meeting a year ago was facilitated by staff from NYU’s Metropolitan Center for Urban Education, with which the district has contracted to address the barriers faced by Latino students in Rochester.

Board member Jose Cruz warned participants at the most recent summit not to equate slow progress with no progress.

"There’s a sense of urgency no doubt," he added. "But over time, slow and methodical wins out."

"It’s an evolution, not a revolution," concurred fellow school board member Melisza Campos.

Last month’s summit also provided an opportunity for committees to continue their work to research and find solutions for improving attendance, health and student placement at Monroe.

The school is in a transitional phase intended to rebuild, rewrite and reintroduce the mission of the school, explained Interim Superintendent Bolgen Vargas. That work also will include revamping Monroe’s arts and sports components, which have a lot of value, he added.

Having a large population at Monroe of Latino students who are bilingual should be viewed as a strength on which the district can build and improve, Vargas added. That work will be conducted in conjunction with family, colleges and social-service agencies, which will provide successful wraparound support, as evidenced by the schools Noguera works with, he said.

Such placement points to a cultural bias that first became evident to Noguera as a child when his family moved from New York City to Long Island. He said his parents — who didn’t graduate from high school — wanted a better education for their six children, but based only on their Spanish surnames, he and his brother were placed in special education.

His brother, Felipe, balked at the placement, but his father told him to behave and just do his work, Noguera continued. When he displayed a picture and said all he did was draw in class, his father finally took action. Showing up in his policeman’s uniform, he insisted that the educators show him their classroom despite assurances that they were doing the best for his children, Noguera added. Their father demanded testing for his sons, and the results showed that both boys were gifted.

"A lot of parents want to trust schools don’t they?" he said. "They hope that if they send them to school, it’ll be OK. But in too many cases, that trust is not warranted."

Noguera said that the book Invisible No More, which he co-edited, proves that working with families and agencies as a community will reverse negative trends, improve educational outcomes for Latinos and benefit all students in the long run, he added.

"The crisis facing our boys is in some ways most acute," he said. "That we continue to ignore what happens to these young men, not just in our schools and community, but in our society is a reflection, a broader reflection, of where we are as a nation."