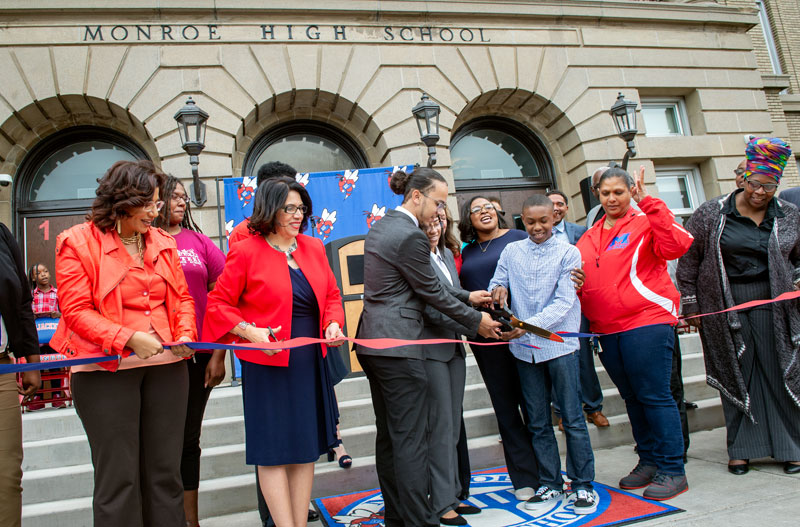 James Monroe High School students and staff, as well as Rochester City School District leaders, cut a ribbon to mark the reopening of the school during a ceremony Sept. 8.

ROCHESTER — The beginning of the 2018-19 school year held special significance for students of James Monroe High School, as it marked their return to a building they had to leave during a three-year renovation project.

Students, parents, school officials and community members christened the newly renovated building during a ribbon-cutting ceremony outside the school’s main entrance on Sept. 8. The crowd chanted “Let’s go Monroe” as the ribbon was cut.

The grand-opening festivities included the first football game ever to be played at the school at its new athletic facility, which includes a new gym for the high-school grades and a new turf field.

“Home games for the first time in 100 years in this building are now possible … and will be here at Monroe,” noted Rob Skeele, program manager for the project.

Football coach Omar Hill said the players are “super excited” with their new workout facility and athletic fields. Most of his players had been seventh- and eighth-graders when they last attended Monroe.

“They’re proud (and) happy to finally be getting back into the (renovated) building … and they’re motivated to come to school every day,” he added.

As Jennifer Yound, English teacher for the middle-school grades, stood in the door of her classroom greeting families Sept. 8, she said the brightness of the building has given students a new energy.

“It’s a great way to start the year,” she added.

Luiciano Bonilla, an English for Speakers of Other Languages (ESOL) teacher, said having air conditioning is a nice amenity — especially given that temperatures reached the 90s on the first day of school on Sept. 5. As a fan of technology, he is looking forward to using the new classroom gadgets, such as interactive SMART Boards that provide a touchscreen for lessons.

During the first week of classes, he said many of the students had “astonished or amazed looks.”

Fantasia DeJesus said she is happy that she is able to spend her senior year at and graduate from Monroe. During the construction, the students in grades 7-12 attended classes in the former John Marshall High School.

“Everything seems brighter,” she added of the renovated Monroe building. “You walk into the school and you know you’re going to have a good day.”

The Monroe project was overseen by the Joint Schools Construction Board, whose members include Rochester City School Ddistrict and City of Rochester administration officials. It occurred over three phases that also included the redesign of more than 20 other district schools. The Monroe project, however, was the largest undertaking, which is why it has taken three years to complete, according to Skeele. The work began with a gut job of the 273,000-square-feet structure, which houses about 250 rooms, and upgrades of roofs, brick and other repairs, he said. Work has yet to be completed on replacement of a pool.

“This (building) actually felt like an old castle,” Skeele said Sept. 4 during a preview tour of the building for community members. “It has 3-foot-thick walls… (This project) was an enormous task, really.”

Tasks included removal of lockers from classrooms and placing them in corridors to expand classroom space, Skeele noted. An old gymnasium was gutted to make space for a new cafeteria, and an unused pool was demolished to create a kitchen area. Such areas as the library and the music room were spruced up with new equipment, he said. And the reconfiguration of the school included building separate corridors, doors and a gym for the middle school.

During the Sept. 8 tour of the building, Naila Cornier said she was impressed by all the changes. She is an alumnus and mother of three children — two of whom attend Monroe, she added.

“It feels very homey,” Cornier said of Monroe’s new look. “I love it. It feels safe. It’s wonderful all the work they’ve done … and is a big blessing for the kiddos.”

Many of those kids are Latinos, noted Beatriz LeBron, a school board member.

“As these students are coming here into a brand new facility, they’re also coming into a brand new educational system,” she said of the recent arrivals from Puerto Rico. “We will all need to, as one community, support these families.”

During the building tour, Luis Pérez, Class of 1973, echoed the statement Superintendent Barbara Deane-Williams made during the opening ceremony that the school’s students deserve nothing but the best and should have access to state-of-the-art facilities that are commonplace for the suburban districts in the area. Pérez also is part of the Greater Rochester Summer Learning Association.

“Environment makes such a difference,” he said in terms of student achievement. “So, this (renovation) is huge. Why shouldn’t our kids have the top of the line equipment, teachers and classrooms? All things that districts around us within a 10-mile radios take for granted.”

Cornier said she hopes the renovation will lead to increasing academic achievement for all Monroe students. The school is currently on the New York State Education Department’s receivership list, which means it has been identified as a “struggling or persistently struggling school,” according to information at nysed.org. Results from state assessments will be released this month and will determine if the school is taken off the receivership list, school officials said.