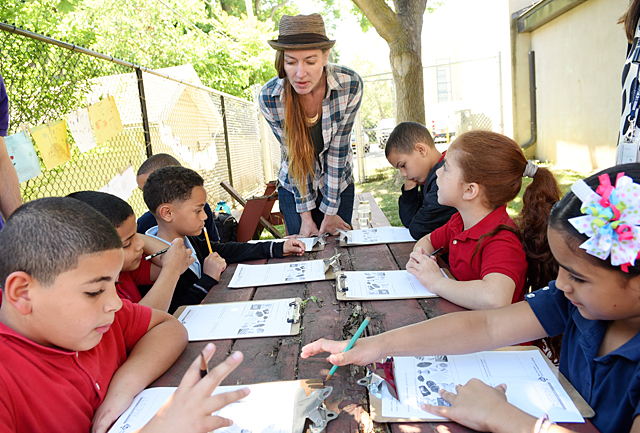 Second grade children from School #28 learn about earth stewardship with the help of guest instructors from the nonprofit Seedfolk City Farm organization.

Students throughout the Rochester region are learning about the ways they can personally help combat climate change and teach others about caring for the earth.

Annah is one of the fourth-graders at Henry Hudson School No. 28 who worked with staff and volunteers from Seedfolk City Farm to plant in their school’s garden beds and greenhouse. They also developed new habits on composting that they brought home to their families.

Educating young people who then brought the message home helped recycling become customary for many schools, businesses and households around the country. But the work continues, explained Amber Powers, an English as a second language teacher and Seedfolk board member. She wrote the application for a $15,000 grant for School No. 28 to partner with Seedfolk and cover the costs of materials and instruction for the pilot program. The program also was to serve as the basis for a curriculum on composting and recycling that she was developing this summer to make available to all area schools, Powers said.

National statistics illustrate the need for such programs, Powers and other educators noted. The average person generates 4.3 pounds of waste per day, which is 1.6 pounds more than produced in 1960, according to information gathered by the Center for Sustainability & Commerce at Duke University (http://bit.ly/1TaFHdx). About 55 percent of 220 million tons of waste generated each year in the United States ends up in one of the more than 3,500 landfills, the center found.

Erialanys Arroyo, 9, had never heard about composting prior to the start of the pilot program, although her family does have a garden in its front yard. She initially thought composting meant recycling, she said. But when she learned that it means collecting food scraps that can be used as fertilizer for soil to help things grow, she was sold.

Other schools around the Diocese of Rochester have taken on projects to care for the earth and heed Pope Francis’ call in his encyclical "Laudato Si’: On Care For Our Common Home."

Students in the primary grades at St. Pius Tenth School in Chili have planted and talked about gardening at home, explained Lucyann Ormiston, a fourth-grade teacher who has been involved with the school’s transition to a new science program called Science Fusion. The new curriculum has a bigger focus on ecology, she said.

The students in the fourth, fifth and sixth grades also participated in an essay contest with the Catholic Daughters of America, which asked them to write about how they are good stewards of the earth, Ormiston said. Several students won first and second places for their essays about recycling, picking up litter and reusing plastics and metals, she added.

"(The contest) also tied in with our religion program," she said. "God gave us this creation. It is our responsibility to take care of it (earth)."

Reuse and recycle was also the focus of a program in Danielle Watts’ fourth-grade class at St. Francis-St. Stephen School in Geneva. She spreads this message all during the school year, she said, and has kids discuss ways materials can be used instead of thrown away.

She also touched on the pope’s encyclical with the class in general terms, she said.

"We talk about how God created the earth for us," Watts said. "It is our responsibility to be good citizens and take care of it."

As Earth Day neared this year, Watts’ class also read Dr. Seuss’ The Lorax and watched the movie, she said. After watching online videos of landfills and recycling plants, they then collected recyclable materials from home, such as plastics, metals, glass and paper, she said.

They sorted the collection and began making robots from the materials, Watts said. The students worked in pairs and designed a robot that did such tasks as cleaning the air or sorting garbage for items that could be recycled.

"They were really inspired," Watt said. "And it was a good way for us to talk about how we can take care of the earth."

At Notre Dame High School in Elmira, the Environmental Science Honors class finished the year with a project related to the pope’s encyclical, explained teacher Michael Sherman in an email.  On the main bulletin board in the school, the students created a collage of pictures from the book Climate Refugees. In the center of the collage, the students posted some of the passages from the encyclical that they found most meaningful, Sherman added.

Brooks Givens said the students had voted on which passages to include with images from the books they had read, which included Raising Elijah written by Ithaca College professor and climate activist Sarah Steingraber, he added.

Givens and classmate, Ana Coulibaly, said they had not read the encyclical before taking Sherman’s class.

"The Pope’s stance on climate change was not surprising to me as I had previous knowledge of his commitment to environmental reform," Givens added. "Reading the encyclical however, made me really understand how deeply the Pope cares and values the world we live in."

The project made both students understand the roles young people must play in caring for the earth to improve its climate conditions, they said.

"The little things we can do as individuals, such as reducing our meat consumption, taking shorter (and) colder showers and buying eco-friendly products can make a big different on both the world of today and tomorrow," Coulibaly said.

"My opinion on the environment changed very much over the past year because of the class," Givens added. "Mr. Sherman, one of the greatest teachers I have ever had, presented us with a wealth of facts and then let us discuss and form our own opinions. … We are headed in a very dark direction, but we are not beyond the point of no return, we can still change our course, and I think the pope believes that as well."