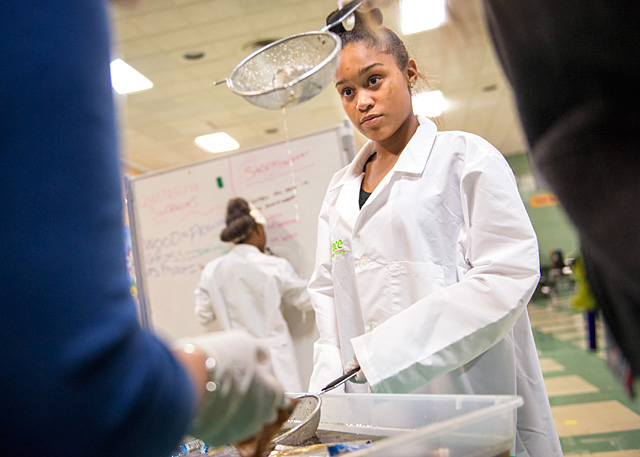 ROCHESTER — Formulating environmentally friendly ideas and designs. Testing ideas to provide data. Collaborating with others to meld ideas and build a model. Presenting project research to an audience.

Those were some of the skills developed by students enrolled this fall in Science STARS (Students Tackling Authentic & Relevant Science), an afterschool program for the middle-school grades at UR-East High School. The Science STARS program has been in place at the school for a decade, explained April Luehmann, an associate professor of education at the University of Rochester’s Warner School of Education and the program’s founder.

For this fall’s session, the students took on the challenge of designing a "green" bus shelter, she said.

"They had to think about sustainability in different areas," Luehmann added.

The design topics the students studied were: optimal heating and cooling elements; natural or recycled materials conducive for building a shelter; "net zero" elements that give back as much energy as is being used, such as placing solar panels and roof gardens on a shelter; native plants that could be grown in a rain garden; and creation of a butterfly habitat in grassy areas next to a shelter.

The more than 20 Science STARS spoke about their research and models during an Oct. 26 presentation to UR faculty and students, East staff and families, and community members who included officials from Regional Transit Service. The students also had the opportunity to meet with RTS engineers during their testing and planning stages.

Seventh-grader Makiah Boswell, 12, said Oct. 26 that he enjoyed building a solar-panel heating system using a box and glass as he studied heating and cooling on one of the five project teams.

"It’s something I want to do … build stuff out of stuff I find and recycled stuff," Makiah added. "That was a great opportunity for me."

Erin McCormick, an RTS project engineer who visited with the students and attended the Oct. 26 presentation, was impressed with how much the students accomplished in a short time.

"The students did a great job," she said in an Oct. 27 e-mail. "They were very creative and enthusiastic. If the students had more time, they could work on developing a structural plan … and generating cost estimates."

The program encourages creativity as it builds on science concepts the students are learning or about to learn, noted Patrick Bond, a Warner School graduate student who advised one of the teams.

"They’re creating knowledge and content from the experience," he said. "There is a lot we can do in an afterschool program like this that you can’t do within the constructs of a school program. We could go deep (on a topic) when they wanted and move on when they wanted to move on because you’re not beholden to a curriculum."

The program also provides team advisers — who are student teachers — with practical experience in working with students, Luehmann noted.

Sarafina Niyukuri, 13, said her "net zero" team had assistance from their adviser’s friend to come up with some of the features they ultimately recommended for the shelter, such as growing plants on the roof.

"It was kind of hard to think of designs," said the seventh-grade student. "We got some … help with those features."

For Jamier Delgado, 12, participating in the afterschool program was a natural fit, he said. Delgado, a seventh-graders, said he works on similar projects at home, including a solar-paneled car and a robot arm.

His team helped create the large-scale model that they presented during the Oct. 26 event. The model took almost two days to build and was based on a smaller model they had designed from wooden craft sticks. The team also used input they received from RTS officials, such as what materials would be most durable.

"I like stuff you can build," he said. "I would like to be an engineer when I grow up."