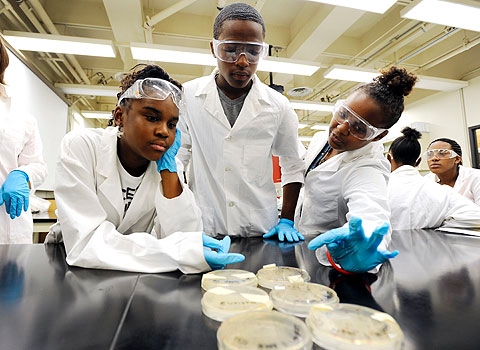 During a laboratory exercise at the University of Rochester on Aug. 1, the girls learned that the pink, purple and blue dots in those samples contained E. coli, fecal and general (meaning safe) bacteria colonies, explained Hannah Cavallo, a graduate student at the university’s Warner School of Education. Unique, a 15-year-old sophomore from East High School, and Destiny, a seventh-grader at Gates-Chili Middle School, had waded into the lake the day before at Ontario Beach Park to collect the samples.

As they and other students, who were taking part in the "Get Real! Science" camp at the university, shifted stations to observe different samples, Unique was one of the first to make a distinction about the samples that came from deeper water.

Making such observations by collecting water samples and then analyzing them made science fun, concurred Unique and Destiny.

"You don’t have to sit in a classroom and learn," said Unique.

Cultivating that kind of interest in science is the goal of the weeklong summer camp that is part of Warner’s curriculum to prepare science teachers, explained Joe Henderson, who oversees the summer program that works in collaboration with the city’s NEAD Freedom School. The Freedom School offers afterschool and summer sessions focused on improving literacy, explained Candace McCracken, a servant leader with Freedom’s five-week summer program.

The philosophy of the school, which opened about eight years ago, is geared toward community-based learning, she added, which is where the Warner affiliation comes in. The majority of the 30 students who participated in the five-week summer program live in the city but a few attend suburban schools, McCracken said.

"It gets them to like science and open up to see the different sides of a subject," she noted.

And having the students answer a real-life question such as "Why is the beach closed for swimming?" also helps them see the connection between science and their daily lives, added Cavallo.

The students also gain public-speaking skills as they present their findings to their parents and Freedom School staff and local officials, noted Theresa Danylak, a university spokeswoman. During the Aug. 6 presentation, she said, the students announced several recommendations for cleaning the lake at Ontario Beach Park, including:

* creating designated eating areas and making sure all trash is removed from the park;

* having a team clear algae from the pier; and

* educating people to keep water clear of trash and hosting a "clean the beach day."

During the summer camp, Cavallo said that the students had learned that algae building up by the pier causes the bacteria build-up that leads to the beach being closed for swimming.

In addition to offering such important information, Cavallo added that the camp helped her as well. With plans to teach biology, she said that the sessions provided valuable experience in providing hands-on lessons to a class.

"For us, to get more informal interaction with students rather than immediately being thrown into teaching … we’ll know how to do real science in a classroom," Cavallo remarked. "And all teaching can be like this."

Cavallo was one of six graduate and two doctoral students who took part in the summer program. She said it’s exciting for her to see how just putting on lab coats changes kids’ attitude about science.

"As soon as we put a lab coat on them, they know they’re doing science," she said. "And it gets them so enthusiastic."

Henderson said that this model of training teachers also removes all the political aspects of education — such as testing — and allows them to try different techniques.

"They are learning about (teaching) science in a really messy kind of way, which turns into different types of learning and creativity," he said.