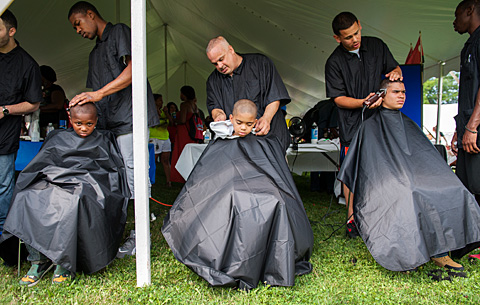 ROCHESTER — Steven Matos said that the word "scholar" was drilled into students’ heads at James Monroe High School during the past year.

And the message, which the 16-year-old senior said is reiterated often during announcements, is getting through.

"I’ve tried harder," Steven said during the Aug. 28 "Welcome Back" celebration on the school’s athletic field. "I want to be able to go to college and … be able to do what I want to do."

Setting such high expectations for students was one of Principal Armando Ramírez’s first steps when he took on his new position last fall, he said. And the key to creating that atmosphere has been building relationships with the students and their families and through the seemingly simple change of using the word "scholars," Ramírez explained.

He faced an uphill challenge to transform the school’s academic achievement, as Monroe is the lowest performing of the Rochester City School District’s high schools, said Ramírez, who was transferred from Marshall High School. But in one year, he said, the school improved its graduation rate from 28 percent to 42 percent. And the dramatic increase was a result of that focus on changing behavior and attitudes, Ramírez added. This year, he will set the staff’s focus on academics, he said.

"I was invited to come here … and try to increase the engagement of families and build school spirit," he said. "This building used to be the best in the city."

Ramírez is a "resilient leader" who understands both the needs of students and the importance of engaging parents in the education of their children, Superintendent Bolgen Vargas said in an e-mail.

"He brings expertise, energy and enthusiasm to the challenges faced by the Monroe High School community," Vargas added. "I believe that the families Armando serves as principal appreciate his dedication, and I am pleased to see his leadership yielding the result of improved achievement by Monroe students."

The "Welcome Back" celebration was part of that plan to create a sense of excitement for students and families and return the school to its former glory, Ramírez said. Dilia Olmeda, the school’s project administrator, "turned a seed into a tree," Ramírez said, by bringing in community organizations, entertainment and food.

"This gives everybody hope," he said of the event.

Additionally, students received free backpacks and even haircuts. Last year, more than 500 people attended the event, and this year’s event was on track to match those numbers, said Olmeda.

"People think our families won’t come," she said. "They come."

Ramírez said that improving Monroe is a personal mission as well as a professional one, since 70 percent of the student population is Latino. Having grown up on the lowest rung of the socioeconomic ladder, he said that he empathizes with the challenges many of the students face but noted he also epitomizes how one can overcome such obstacles.

To open up the students’ eyes to the opportunities around them, Ramírez and his team have begun partnerships with such community organizations as Rochester Area Performing Arts and Young Audiences/Rochester Latino Theatre Company. The State Police also will offer its exam at the school.

Students also will be able to take courses and get college credit through an initiative with Monroe Community College, he added. Partnerships with St. John Fisher College, Rochester Institute of Technology and SUNY Geneseo will offer improved literacy and science services to students and professional development for teachers, he added.

"To me, information is power," he said.

The school also is improving families’ access to school resources through a new parent center, parent involvement training sessions offered in Spanish and increasing the number of parking spaces dedicated to families.

"I want parents to feel I have a spot for them," he said.

Lakisha Cribb, whose daughter Ajañee Williams is an eighth-grader at Monroe, said that she was impressed with how much effort the school was making to welcome families.

"They’re going through a lot to make you aware and knowledgeable about the things they have to offer to help," she said. "As a parent, we want to feel comfortable where our kids are going to school. It’s important to me that the kids are going to get an appropriate education."

But Steven’s father, also named Steven Matos, said that more parents do need to step up and become more involved in their children’s education for the school to truly undergo a transformation. He is a custodian at the school.

"The school can only do so much," he said. "We offer a lot of programs and a lot of stuff for the kids. But if they are not pushed at home, they’re not going to be what we want them to be. Parents have got to be involved."