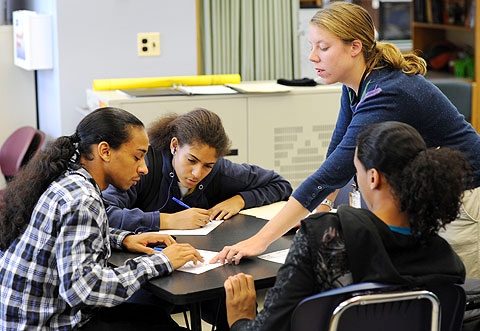 The 15-year-old East High School sophomore said that he always liked drawing. So, when he attended a basketball tournament in Nevada two years ago and saw the buildings there, Tommie said he realized to which career his hobby could lead him.

And East’s new college prep center — in partnership with the University of Rochester’s David T. Kearns Center for Leadership and Diversity in Arts, Science and Engineering — will help him get there, Tommie added.

"They tell you what you need to do to get to college," he said.

"They" are the center coordinator and two AmeriCorps volunteers who staff the center on a daily basis. In a designated area of the school, which includes a model of a dorm room, the staff provides workshops on college applications, financial aid and scholarship searches as well as SAT preparation and tutoring sessions to provide academic support. Staff members also visit middle-school classrooms at East to get students to think about college as early as possible, said Rebecca Conrow, the center’s coordinator.

The room’s walls and chalkboards are filled with college banners from such colleges as Columbia University to Tuskegee University. Using a smartboard, the staff members also take students on tours of college websites and provide them with links so they can pursue their interests on their own, explained Conrow.

Placing the center at East was a natural fit, as the school already had a connection to UR through its Upward Bound program, which has a 96-percent graduation rate, said Anthony Plonczynski, associate director of the Kearns Center’s pre-college programs and an East High alum. Ninety percent of those Upward Bound graduates also go on to college, he added.

"Our intent is to really complement the counseling department," noted Conrow, also an East High grad. "We want them to use us as a resource."

The center will target the population of students who are the first generation in their families to attend college, demonstrate academic need and come from low-income families, Plonczynski explained. The program received an $85,000 renewable grant from the JPMorgan Chase Foundation that helped pay for a laptop lab. The AmeriCorps volunteers — who are paid small stipends for living expenses and work at a variety of local organizations — also play a vital role in offering students daily access to the center, he added. A pilot program last spring did not have a consistent location or hours, Plonczynski remarked.

The earlier students develop college aspirations the better, said Judy Marquez-Kiyama, an assistant professor of educational leadership at the UR’s Warner School who also was one of the lead researchers on a recent study of the high drop-out rate among Latino students.

"It’s definitely a model program that other schools could replicate," Marquez-Kiyama remarked.

Analysis of Census data by the Pew Hispanic Center did reveal good news on the Latino college student front. The number of Latinos going to college hit an all-time high in October 2010 with a 24 percent surge from the previous year, according to a report at http://pewhispanic.org/reports/report.php?ReportID=146. The report stated that the increase is the result of such factors as population growth and educational strides.

But Angel Andreu sees the numbers in a different way. The director of institutional research at Monroe Community College said that the report is misleading because it leaves out an obvious reason why the numbers changed, which is that more students now identify themselves as Hispanic because of the change in federal reporting forms that previously did not offer a separate Hispanic designation, he added.

Therefore, if a student checked off Hispanic on the Census form, the student is reported as Hispanic even if race was checked off as black, Andreu explained.

"It is not clear if the increase is a genuine increase in higher education or an artifact of new reporting requirements or a combination of both," he said. "Like most things, it is most likely a combination. … So the news should really state that more people are identifying themselves as having a Hispanic heritage rather than Hispanic enrollment  just dramatically increased from 2009 to 2010."

Marquez-Kiyama said that only the future will tell if the pattern holds or was an anomaly. The bigger issue is the number of Latinos going to community college and not graduating or transferring into four-year programs, she noted, adding that community colleges are beneficial on a financial basis and often provide cultural ties for Latino students.

"But we’re still not serving these students … if they’re not graduating," she said.

MCC’s own numbers have shown a dramatic 69-percent increase in Latino student enrollment from 927 students in the fall 2006 to 1,331 students last fall. And the college has responded by developing support programs to retain students who are Latino and African-American, noted Ann Topping, dean of students at the Damon City Campus.

The college will launch a new program to target minority women beginning in January. The Empowering Women initiative will serve as a counterpart to a program already in place for minority men, called Doorways to Success, and services offered by Monroe County Department of Social Services, Topping explained. MCC contracts with the county to offer a vocational work program, while the county also connects students with housing and employment resources, she said.

"We want to help students understand that we have a network of services," Topping remarked.

Empowering Women, like Doorways to Success, will include career-development courses and a mentoring component, she said. A gender-based program was necessary because minority women face challenges with self-sufficiency and financial literacy as well as having to deal primarily with child-care issues and cultural expectations, Topping added. Issues of domestic abuse and healthy relationships also arise and may hinder a Latina’s completion of her degree, she said.

"How do you develop the skills to stay focused on what you want for completion and navigate some difficult family situations?" Topping said. "What we found is women … who were able to combat issues of poverty, financial insecurity were much more successful than women not able to do that. That’s one of the focuses of the program, a key component."