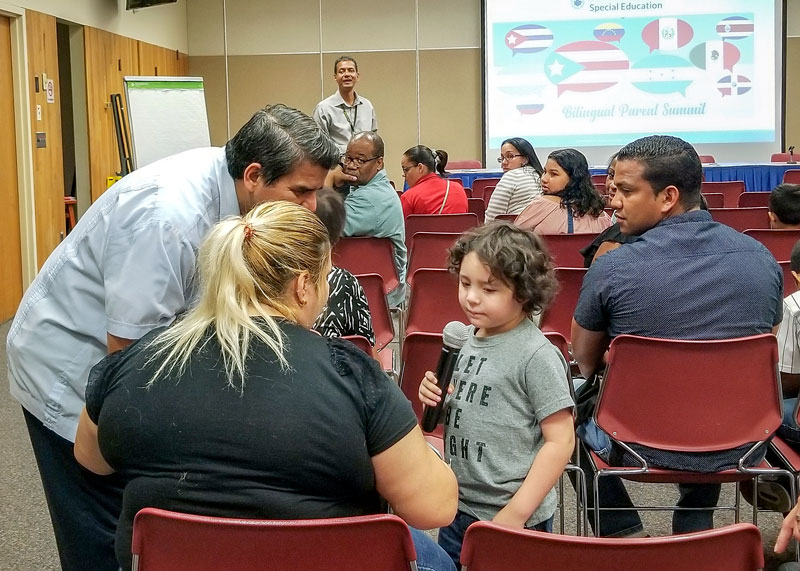 Osvaldo Omar Cordero asked a question during an Aug. 25 Bilingual Parent Summit held at the Rochester City School Districts central offices. His mother, Grisel Figueroa, explained how a teacher at his preschool referred the family for evaluations that led to an autism diagnosis for Osvaldo who has begun to receive services at school. He will begin kindergarten at Charles Carroll School No. 46.

ROCHESTER — Hiring a diverse teaching staff that better mirrors the student body is not only an issue for the Rochester City School District but one facing school administrators across the country, district officials say.

In the last decade, the number of diverse teachers has remained stagnant nationally based on statistics monitored by the New York state education department, said Harry Kennedy, the Rochester district’s chief of human resources. Eight-two percent of teachers are white and 18 percent African-American, Hispanic or Asian, he said.

In Rochester, the numbers are similar, with 75 percent of the district’s staff being white and 25 percent representing teachers of color, Kennedy added.

“While we are doing better than the national average, we still have a ways to go,” he said.

To improve those numbers, the district has taken a series of steps in recent years to aggressively recruit and retain teachers of color, Kennedy said.

Those steps include the following:

• Partnering with Ibero-American Action League and launching a targeted Facebook campaign for families in Puerto Rico whose members are seeking job opportunities.

• Working with the Catholic Family Center’s employment division to provide job opportunities for refugees and their families.

• Partnering with local African-American community agencies — such as the Urban League of Rochester, Action for a Better Community and Baden Street Settlement — to reach out to African-American families about employment opportunities.

• Collaborating with the United Negro College Fund on recruitment strategies focused on junior and senior college students of color.

“There is an incredible amount of outreach in those populations that are underrepresented from a teaching standpoint,” said Jason Willis, the new director of African-American studies at the district. “We are a work in progress.”

The district provides incentives to teachers from other states as well, but that strategy has proven challenging, since New York has some of the toughest certification standards, Willis noted. The district has been advocating for adjustments for teaching certification reciprocity, he said.

“Sometimes, it takes a year for your certification to be honored,” Willis said.

Since Hurricane Maria, the district has boosted its ongoing efforts to hire bilingual teachers as well as teachers to serve English language learners, he added.

“We have a goal to ensure as many of our teachers as possible speak multiple languages, that we are making connections to those who can help to enrich the opportunities and resources we have to offer to our children and our families,” said Superintendent Barbara Deane-Williams on Aug. 25 as the district hosted its first Bilingual Parent Summit.

The district also is working internally on developing curriculum for Latino and black studies, and Willis noted that hiring him to oversee Afro-African American studies was a positive step in that direction.

Increasing district and community collaboration on issues of hiring, curriculum and professional development are among the recommendations presented by members of the Movement for Anti-racist Ministry and Action Coalition at a community meeting in June. The group also seeks alignment in central administration hiring policies and school-level hiring practices.

Kennedy said the district is working on many of the coalition’s points.

“With the significant investments that we are making to recruit, hire and retain our teachers of color, we have to ensure that once they are hired, that they are given every opportunity to become successful,” he added. “With this being said, we do monitor building-level processes to remove obstacles that may be presented … (or) if we suspect any violations and racial bias being directed towards our new recruits.”

The MAMA coalition’s demands are largely responsible for much of the changes taking place in recruitment and curriculum, Howard Eagle, who heads the coalition, said in an email to El Mensajero Católico.

“However, in the final analysis, with regard to the broader, overall reality, those things outlined above amount to minuscule, baby-steps regarding the depth and breadth of work that must be done if we’re really serious about significantly, concretely, and measurably impacting … issues city students grapple with as they try to be successful,” he added.

Eagle also is a member the district’s Racial Equity Advocacy Leadership (REAL) initiative that is working on issues of racism, whether blatant or implicit, that students face in city school, he said.

In its second year, the goal is to identify a framework for action on ideas that were raised in its first year, Willis said. The group will begin to meet twice a month, and the superintendent will be part of upcoming meetings as she was when the REAL team first began meeting, he added.