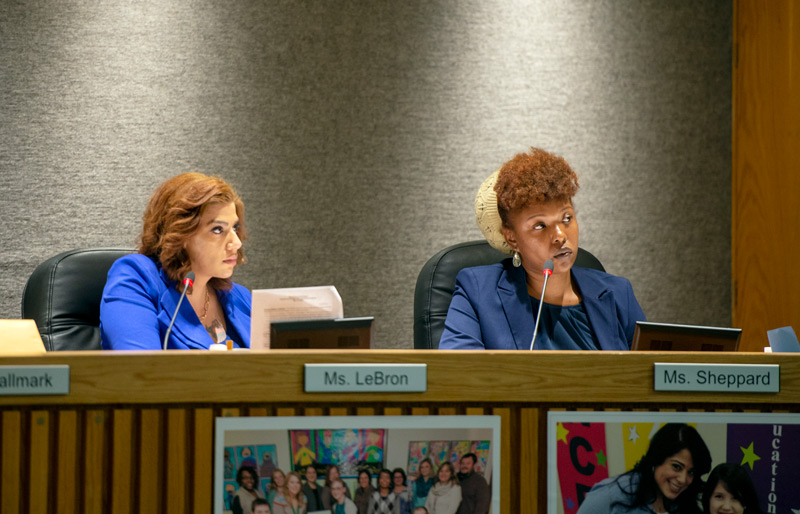 School board members Beatriz LeBrón (left) and Natalie Sheppard listen to the school budget presentation May 15. LeBrón and Sheppard each voted against the new budget.

ROCHESTER — The Rochester City School District board of education adopted a $915 million budget last month, but two new board members say they voted against it because of last-minute changes that they were given too little time to review.

Other savings were found in lower than initially estimated health-care cost increases, reducing the number of substitute teachers to be hired and cutting BOCES costs by using in-house staff, according to information at https://bit.ly/2seOcho. The current BOCES contract totals $35 million, Sewell said.

The in-house staff hasn’t been hired yet, though, which is a concern for board member Beatriz Lebrón, who voted against the budget. And the district awaits confirmation of grants for additional preschool and English for Speakers of Other Languages programs included in the budget, she said.

“We approved cuts to special education services funding (for BOCES) before we’ve hired people to fill these (in-house) positions,” she said. “That’s so backwards. It doesn’t make sense.”

Since the board was receiving information on the changes just hours before the budget adoption hearing, members had no time to analyze the cost savings, Lebrón added.

“It is not a good practice to give information right before a vote needs to happen,” she said. “It would never happen in any other business. No executive ever in their right mind would approve a budget (like that). … It just doesn’t work that way.”

“In order for me to have voted yes (to the budget), I would’ve needed the administration to explain to me what cuts were made and where the money then went,” she said. “I could not in good conscious defend this budget to the community because there were so many last-minute changes and multiple discrepancies that I did not get a chance to flesh out with the administration. The meeting to cast the vote … unfortunately that’s where I saw a lot of pertinent proposal ideas for the first time.”

Sewell explained that his staff was delayed in presenting information in part because of work they were doing on the Path Forward, a plan proposed by Superintendent Barbara Deane-Williams for improving schools through community input that took place in meetings last fall and winter. Additionally, a week before the budget vote, he had proposed staff layoffs because of decreases in aid and was asked by administrators to use the fund balance to avoid those cuts, Sewell said.

More than 130 teachers also will be hired to help meet the needs of the more than 600 students from Puerto Rico and other areas affected by hurricanes last fall, including 22 reading teachers and 11 ESOL teachers. The influx of students from Puerto Rico is expected to continue rising, Sewell said, contributing to an expected increase next year in the district enrollment for the first time since 2002.

Lebron said she supports maintaining a Bilingual Academy for these new students in grades K-12 at 30 Hart St. The district is considering a four-year lease to renovate the space for the newcomer program, she said.

“This (strategy) gives us four years to plan out what the program could be vs. a shotgun approach of moving for a year (and) moving again,” added Lebrón, who is putting together a task force that will begin work this summer on improving instruction for English language learners across the district.