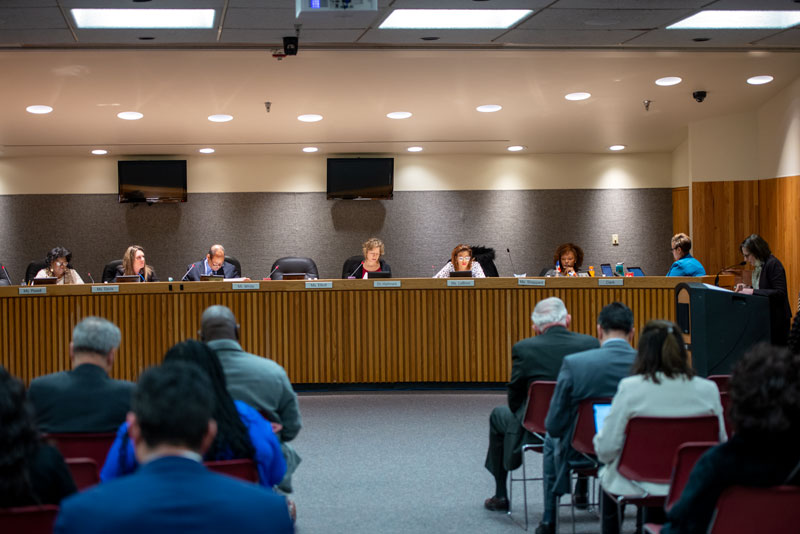 The Rochester City School Board meet during a Jan. 17 session where board members discussed options they plan to submit to the state.

By a 4-2 margin Feb. 6, the Rochester City School District voted to submit its response to the Distinguished Educator Report filed last November. The district was required to respond by Feb. 8 to the report by Jaime Aquino, who had been appointed by New York State Education Commissioner MaryEllen Elia to help address the district’s poor performance.

In his report, Aquino had listed 106 findings along with 84 recommendations for the support and advancement of the district and its schools. The report was derived from meetings with stakeholders, input groups and Aquino’s personal review of the district’s operations.

Since the release of Aquino’s report, members of the New York State Board of Education have stepped in to oversee the Rochester district to ensure that changes are implemented for the following school year.

The board’s response — constructed by the board of education and other administrative members — outlines a multiyear action plan for the district to implement. The plan incorporated feedback gathered during community forums and consultation with Aquino.

The 110-page plan responds to each of Aquino’s 84 recommendations, listing each original recommendation followed by a responsive action and information on who will be responsible for that action, what resources will be needed and a time line for implementation.

Aquino has made multiple appearances around the community since issuing his recommendations to inform the public of his findings and respond to questions.

“The district does not provide support to its lowest performing schools,” he said during one such community meeting Jan. 24 in speaking about the number of district schools that are under state receivership.

According to the New York State Education Department, schools enter receivership status when they persistently struggle to perform at the state level. Under receivership, a school must make changes necessary to improve the quality of education and student performance.

“It is not just the fault of one single school but the district as a whole that needs to be helped,” Aquino continued during the public meeting.

Aquino said he attributed some of district’s issues to a longstanding structural budget deficiency. He also found the district had a high turnover rate in leadership positions at all levels, a problem he considered unique to Rochester as compared to other cities with which he had worked.

In December, Barbara Deane-Williams retired as district superintendent after only two years in the position, and the RCSD has gone through four superintendents in the last decade alone.

The board of education started a search to replace Deane-Williams at the end of last year, hiring BWP and Associates to assist in the process. Associates from BWP conducted a number of public forums in January to allow community members to express their concerns and priorities for the selection of the next superintendent.

The final forum took place Jan. 29, and an online survey to collect public feedback was available on the district website through Feb. 15.

The board of education will use the input gathered from the community forums and survey to compile a leadership profile to guide the search by BWP and Associates.

The board anticipates choosing a candidate by May who would begin in the superintendent role in July.