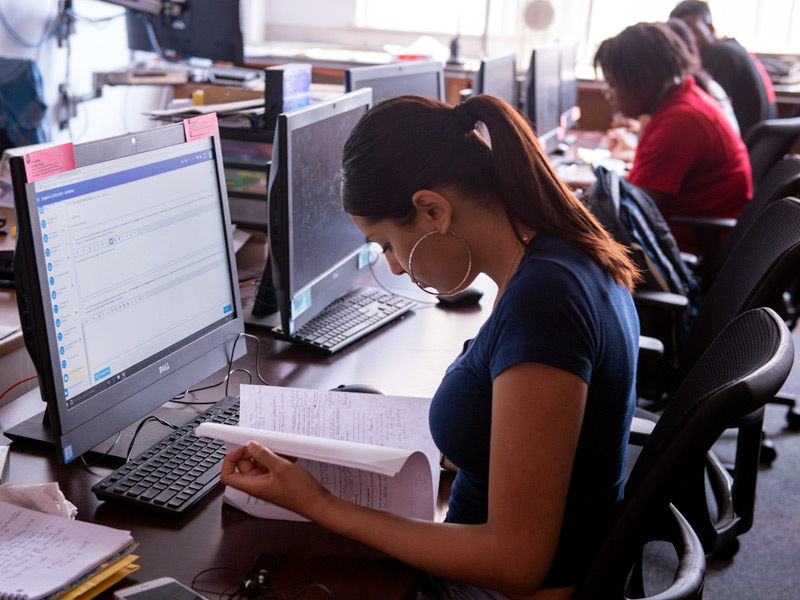 Yadieliz Perez study's in an after school computer lab at All City High used to help students recover credits to graduate May 30.

ROCHESTER — The mission of the All City School program is simple: help city students successfully overcome obstacles on their paths to high-school graduation.

Administrators of the program for the Rochester City School District students say they are doing well with that mission, with more than 1,300 students having graduated since the program was formed more than five years ago. The program currently serves 305 students.

All City offers students in grades 10 to 12, who are between the ages of 17 and 21, an opportunity to get caught up on high-school credits and, in some cases, even graduate early, explained Principal Armando Ramírez and Susen Hart, the program’s academy director. Students make up missing credits by completing them online or taking classes or exams they missed in their first go-round at the high schools in which they were originally enrolled, Ramírez said.

Initially, All City mainly served as a phase-out program for students who were enrolled in high schools that were closed in 2013, such as Marshall, Thomas Jefferson, Franklin and Freddie Thomas, Hart said. From there, it began to serve students who were overage and lacking sufficient credits, as well as “high frequency” students who were disruptive in their respective high schools, Ramírez said.

More recently, the school was again rebranded as a “place to finish what you started,” he added.

A variety of factors pose challenges for these students, including long-term suspensions, chronic absences, homelessness, incarceration, having to work or being young parents, said Ramírez and Hart. Thirty-five percent of the 305 students in the program are parents, he added.

Too often, these students also were told that they would never succeed, Ramírez remarked.

“We say don’t prove them (naysayers) right,” he said. “Prove them wrong. Show that despite you, I made it.”

Once they finish, though, Ramírez and Hart noted that the staff maintains a relationship with the students, helping them with job connections, references and resume assistance.

The students are able to achieve graduation through individualized plans that best serve each student’s needs, Ramírez explained. Since All-City is a program and not a district school, the small staff of teachers, counselors, a psychologist and a social worker personally interact with all the students and ensure they are staying on track, he said.

Each plan begins with a conversation with the student and a parent, guardian or other family member who is going to make a commitment to support the student at home, he remarked.

“We’re looking for a partnership,” Ramírez said. “We don’t have all the answers. Lots of our students struggle with life.”

During that intake process, all of the obstacles and challenges in a student’s life are taken into consideration, Hart said.

“Sometimes, students can be naughty in seventh or eighth grade and get labeled as a bad kid,” she said. “It’s hard to change people’s perceptions. But they come here, and staff only know what the student shows them. It gives them a fresh start.”

The program has only two rules, which most students follow: No dating fellow students and no disrespect for adults, Ramírez said.

“Our greatest asset is our staff with a willingness to work with students wherever they are and get them where they want to be,” he said.

Staff members might even watch an 11-day-old baby for a few minutes while the mother meets with teachers to determine what class work she can do at home, as was the case on May 22.

Shyasia Ellis, 18, stopped in to the main office with the baby while her mother watched her 1-year-old daughter. Ramírez calls Ellis one of his “school daughters.”

She said the All City program was recommended to her when she became pregnant a second time while a student at Benjamin Franklin High School. She had stopped going to school for a while after having her first child, she added.

“I want to focus on graduation and getting out and starting a new life,” she said. “I want to go to college.”

All City is home to many students who have made adult choices, so they are treated respectfully by staff and that same respect is asked of them, Ellis added.

“Everybody is family,” she remarked. “When you have teachers on your side, you can do so much.”

The program, which began in the former John Marshall High School, is now located in the former Holy Apostles School at 2 Austin St. District officials signed a five-year lease in January and moved into the building the same month, Ramírez said.

When the former occupant, the Vertus Charter School, moved out in 2016, the parish prayed a new tenant would come soon, said Father Tony Mugavero, pastor of Holy Apostles.

A few months after changing his prayers to ones of gratitude and knowing God would come through, he received a call from the city school district about its need for space.

“We were thrilled,” Father Mugavero said of learning about the All City program. “It’s an older student body, and it seems the kids are motivated.”

Students have even provided help with landscaping around the church, he said.

“There’s a nice synergy” in the school relationship with the community, Father Mugavero noted.

The hourly church bells also are a nice reminder that the school community is close to God and to have faith in themselves, Ramírez added.

“Our kids need that,” he said.