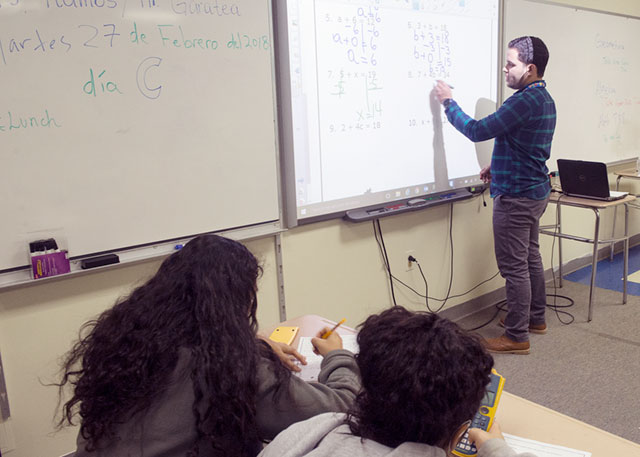 Jonathan Cruz-Colon goes over a math problem on a white board with 7-8 grade student on Feb. 27 at the Bilingual Academy. The school was set up to meet the need of recent students coming from Puerto Rico. Courier Photo by John Haeger

ROCHESTER — More than two dozen teachers from Puerto Rico have been hired to work with nearly 600 children from the island who enrolled in the Rochester City School District after Hurricane Maria.

While most of those students were placed in bilingual and English as a second language programs around the district, more than 70 are attending classes in the Bilingual Language and Literacy Academy at 30 Hart St., which was created specifically to serve students displaced by the hurricane, said Brenda Pacheco, a principal on assignment. Most recently the principal at School of the Arts, Pacheco oversees the academy for students in grades 1-12 along with Sandy Jordan, another principal on assignment.

“When we ran out of seats (at district schools), we needed a place for these students,” she said. “Every day we get a couple of more students.”

New arrivals are placed at the academy, which is scheduled to remain open through June in district-owned space that also houses programs for suspended students, adult learners and professional development, she said. The academy’s capacity is 125 students, she said. Five of the students currently enrolled at the academy are on track to graduate, and they will be allowed to take the only exam required of them in Spanish, Pacheco explained.

District officials will decide after this school year whether to continue the academy in another space, Pacheco noted.

“This was available space that could be used quickly,” she said. “But we want the kids to have a school setting.”

“Nobody predicted the hurricane’s impact and this huge influx of people” into the district, she added. “We commend the district for responding so quickly to try to meet all of their needs.”

Creating the academy was a step in the right direction, as it provides wraparound services for students and their families, which the council and Ibero have been advocating for years, she added.

“As a community, we would like (the academy) to stay a program” offered by the district, Pedraza-Burgos said. “Plenty of kids who have come, especially coming from other Spanish-speaking countries, need those important wraparound services to help with trauma and transitions and to work closely with families.”

Spanish-language instruction at the academy is provided by 12 teachers, Pacheco said. Additional bilingual staff includes a paraprofessional, a social worker and several volunteers. A home-school assistant visits families that enroll their children in the academy to guide them through the new-school process, which includes an assessment of language skills and whether they have special needs, Pacheco said.

Half of the academy’s teaching staff was hired from Puerto Rico, and the others are native speakers from other Latin American countries, she said.

Of the more than two dozen teachers from Puerto Rico, many had become familiar with the district at a recruitment fair on the island last May, Pacheco said. The district was able to hire them immediately, thanks to a waiver for state certification issued by the New York state education department following Hurricanes Harvey, Irma and Maria. Any teacher moving to the state from hurricane-affected regions is allowed to teach and will have two to five years to complete their certification requirements, Pacheco said.

Jonathan Cruz-Colón, a special-education teacher from Camuy, Puerto Rico, heard about opportunities with RCSD from a friend who had attended the recruitment fair, he said. Cruz-Colón moved to the area about two months ago with the friend, who also has been hired by the district, he said.

Having taught in Puerto Rico for more than four years, he is grateful to have found a job following Hurricane Maria despite the shock of the freezing temperatures when he arrived in December.

“The weather is not very tropical,” he joked.

But he said he will adapt to the cold weather after having lived through the hurricane, during which he spent about 18 hours trapped in a room with his grandfather, sister and nephew.

“It was tough and stressful,” said Cruz-Colón, who added that he can no longer tolerate the sound of wind and that all of the family members that were with him also have moved to the mainland.

“The sound brings back so many awful thoughts — of being without water, without electricity, without being able to communicate with family,” he said.

So Cruz-Colón said he jumped at the chance to come to Rochester. In his new job, he said he appreciates having a mentor and will begin taking classes to improve his English-speaking skills; he already understands the language well. Pacheco noted that all of the new teachers are paired with mentors.

“It’s a great opportunity for growth,” Cruz-Colón said of the move to Rochester. “It’s an enriching learning experience.”