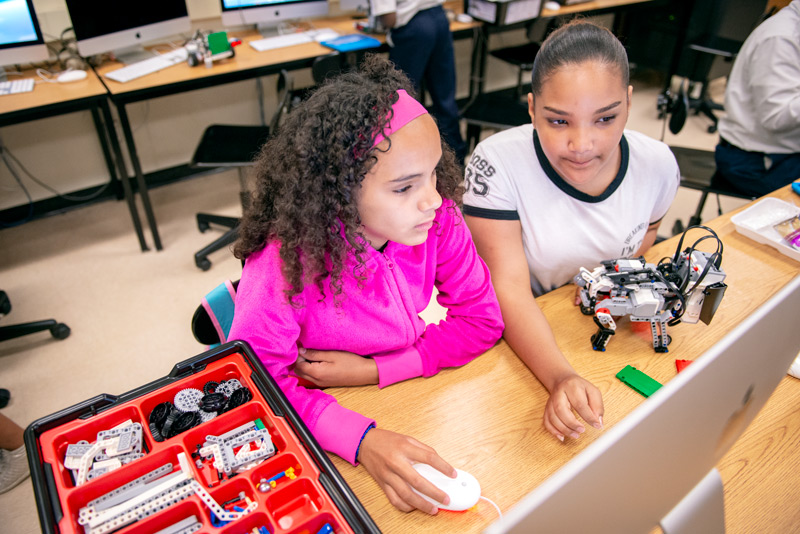 Sixth-graders Javiellys Pomales (left) and Destiny Pizarro make changes to the software on the robot dog they built in the extended learning program at Rochester School #9 focused on robotics June 13.

Students around the Diocese of Rochester are taking part in robotics teams to learn important life skills and develop their knowledge of science, math, technology and engineering.

Taking part in such teams also encourages students to consider STEM careers and teaches them about the value of brainstorming, teamwork, problem-solving and creativity, teachers and coaches said.

It was a teacher who encouraged E’Mere Weaver, 11, who attends Martin Luther King Jr. School No. 9 in Rochester, to join a robotics team, which he said he had not thought of before then.

“It helped me … to build stuff and learn to program,” he noted during a June 12 session.

The robotics program, which is offered daily for fifth- and sixth-graders during the expanded learning opportunities, which provide enrichment programs outside the classroom, began about seven years ago, explained Robin Hill, a teacher and one of the robotics coaches, Principal Shirley Jackson pushed for additional funding for robotics that allowed for the purchase of 15 robots this past school year, he said.

Using the additional equipment, the students studied the Mars rover by building and programming their robots to complete different missions, Hill explained. The students participate in the Finger Lakes region’s FIRST LEGO league competitions at McQuaid Jesuit High School and Rochester Institute of Technology, where they also have taken part in the E3 Engineering and Technology Fair at Rochester Institute of Technology.

The activities provide a lot of experiential learning, Hill noted.

“There’s a lot of problem solving,” he said. “And designing for robots involves a lot of math gearing up and gearing down (the robotic machines).”

Destiny Pizarro, 12, said being on the robotics team has been life changing.

“Since this is engineering basically, we learn from this and can (build on) these principles wherever we’re going to college,” she said.

Participation in robotics programs offer 21st century skills that will translate to the classroom, college and workplace in the future, said Deb Marvin, technology coordinator of St. Mary School in Canandaigua.

St. Mary’s robotics program for grades 6-8 began with a handful of students about 12 years ago under the leadership of a former middle-school teacher, Marvin said.

Now, about 19 out of the 40 middle-school students at the school are part of the team. Once the program begins each January, students meet once a week after school for nearly two hours each session, she said.

Elementary-level enrichment activities also are offered through the school’s participation in the FIRST Lego League, which teaches students about motion, friction and aerodynamics using pre-designed kits, Marvin explained. St. Mary’s is one of the 100 teams in the league, according to information at upstatenyfirst.org.

Funding for the materials is provided by the school as well as donations from families and local businesses, Marvin said.

St. Mary’s middle-schoolers also have the opportunity to compete in the E3 Engineering and Technology Fair at RIT, Marvin noted. The organizers provide three categories for the challenges: robotics, simple machine and science.

“Each of the activities, of course, requires some level of scientific principles … and, of course, some technical skills like coding,” she said. “Our kids are so good with technology that the tech stuff is almost like an afterthought.”

RIT also hosts an annual Finger Lakes Regional FIRST Robotics Competition for high-school teams. The robotics team at Elmira Notre Dame High School participates in this competition, and has excelled and gone on to world championship competitions for the past two years, said Robert Stanley, the school’s former coordinator of technology.

When he began coaching the team in 2014, it was ranked 46th out of 50 teams in the Finger Lakes region, explained Stanley, who ended his tenure at the school in June. He now works at Corning Community College but plans to participate as an adviser for the team, which is going into its eighth year, he said.

His project-management skills along with the addition of several exceptional students provided the right mix for a championship team, Stanley said. The team ranges from 20 to 25 students in grades 9-12.

It originally formed when two students, Anna Knapp and Danielle Samter, called Scott Deming, an engineering associate and director of the advanced engineering group at Corning Inc. The girls had read about Deming receiving the Joseph Engelberger Robotics Award in 2010, he said in an e-mail to the Catholic Courier, and asked if he’d consider helping the girls start a robotics team at Notre Dame. They then showed up at his home on Halloween and asked again, Deming added.

He had been tinkering with the idea of getting more involved with local robotics teams since his own children were grown, he added. Upon consultation with fellow Corning staff, the team became a reality, Deming said.

The company’s participation is both philanthropic and self-serving, he acknowledged.

“At Corning, we struggle attracting and keeping world-class engineers to our small upstate New York community,” he wrote. “I thought that if we could get local students involved in science, technology and engineering, and they went on to get technical degrees in college, we may have a better chance of recruiting and keeping the talent in the Chemung Valley. We have recently hired our first (Notre Dame) student at Corning after they finished their college education, and she is now a mentor on the team she was on as a student.”

Stanley said the team is proud to have been created by female students.

“Our mission always is to inspire STEM, specifically in female or undeserved or under-privileged students,” he said. “We’re (also) a group, if you don’t belong anywhere else, we’ll accept you.”