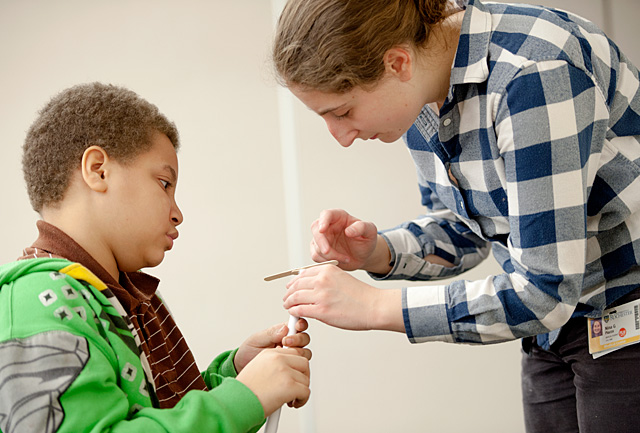 Then, he looked closely to see if he saw smoke or a cloud in the bottle after lighting a match at the bottle’s opening and quickly closing it.

Stephen Hong, a first-year medical student at the University of Rochester School of Medicine and Dentistry assisted with lighting the matches and talking Dwayne through the different variables in the experiment.

"I’m trying to see if I could put a cloud in a bottle based on water temperature, bottle size and liquid dye," explained Dwayne, a 12-year-old sixth-grader at Dr. Walter Cooper Academy School No. 10.

Dwayne is one several students from School No. 10 and Nathaniel Rochester Community School No. 3 who have been taking part in the Rochester Young Scientists Club at the medical school during the past few months.

"I like science," Dwayne added. "I’ve learned lot of new words like scientific method … and how certain things affect the outcomes of experiments."

Expanding city students’ access to such knowledge is one of the goals of the newly formed club, which was the brainchild of medical students Nicholas David and Tiffany Mark. They also sought ways to connect more with the Rochester community, David said.

"We thought it’d be a good idea to bring kids from the (Rochester) city school district to see what science is about," he added. "And it was an opportunity to do some hands-on experiments."

The students also could see what a great community resource the university is and perhaps think about going to school there, David said. Each student was paired with a volunteer medical student as part of the program, he added.

"We also could give back a little bit," he noted.

The students approached the district and connected with Nydia Padilla-Rodríguez, director of community partnerships, who led them to Schools 3 and 10.

Peter Mastrogiovanni, a STEM (science, technology, engineering and math) specialist at School No. 3, said that about 20 students from both schools signed up for the program but about half have attended regularly for the sessions held every other week. The program began in November. The key has been providing transportation directly from home to the UR campus, he said.

The program also builds on the transformation that is taking place at School No. 3 as it becomes a STEM building, Mastrogiovanni said.

"This (UR program) is just a great addition to what’s going on in our building," Mastrogiovanni added. "We’re building a great foundation. That’s the other great thing about this."

In addition to conducting their own experiments and learning scientific terms, the students also got to make rockets and looked through microscopes. The culmination of this year’s inaugural sessions will be creating a poster and giving an oral presentation of the experiments and outcomes at the UR, David said.

"It’s a wonderful experience (for the students)," noted Padilla-Rodríguez. "They’re exposed to networking. They understand how medical school works and can start thinking about their own career goals from being on a college campus."

Adaliz Santiago-Díaz hopes to become a veterinarian even after discovering during the Feb. 7 session that vet school requires more years of education than medical school. As part of the science club, the 10-year-old fifth-grader at School No. 3 undertook the classic Mentos-Coke experiment to see how much foam was produced based on the surface area of the candy and which brand of cola was used, she explained.

Other student experiments included testing the battery voltage of fruit or various liquid solutions as well as trying to create the perfect paper airplane.

Adaliz said that the experience has been fun.

"I wanted to see what it would be like coming here (UR) and getting hands-on experiments and stuff," she said.

The program offers a great opportunity to encourage more students, especially girls like Adaliz, to be interested in science and pursue STEM-related careers, added Judy Diep, a second-year medical student from Brooklyn.

For Shwetha Manjunath, a second-year medical student from Johnston, Pa., volunteering for the program was just a natural progression of the tutoring she has been providing to younger students for years in high school and college.

"I wanted to continue doing that in medical school," she said. "And it’s important to allow kids to explore science in a stress-free environment."