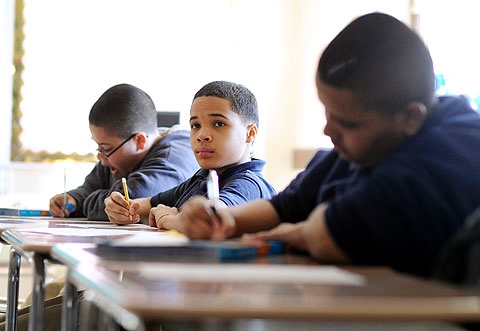 ROCHESTER — When it comes to analyzing the success of a mentoring program such as Pillars of Hope, the research has already been done, according to its program director.

"Kids who have connections to a positive adult role model, they’re the ones staying in school," said Jackie Campbell, an assistant city recreation department director who oversees the program. "We know it has an impact."

That is why Campbell led the creation of Pillars of Hope six years ago with a focus on helping African-American students, she explained. Since that time, teams of at least 10 adult mentors have worked at five city schools and concentrated their efforts on middle-school students, she added. Not only does she hope to expand the program into every elementary school in the city, but she recently called on fellow staff members to help recruit Latino professionals to bring the program to the district’s schools with large populations of Hispanic students.

To accomplish both of those goals, the program would need about 400 volunteers, Campbell noted.

"All (the principals) want this," Campbell remarked of the Pillars of Hope mentoring model. "But they ask, ‘Do you have something for Latinos?’"

Principal Larry Ellison, from John James Audubon School No. 33, said that his students have already benefitted from Pillars of Hope. Ellison spoke after Campbell’s presentation on the Pillars of Hope program at City Hall on Aug. 8.

His school population is 76 percent African-American and 20 percent Hispanic, so he said that he welcomes any expansion of the program.

Such feedback is why Ray Mayoliz, a youth intervention specialist with the city’s Pathways for Peace program, stepped in and put the word out to the Latino community this summer and quickly received many responses, he said. There are three elementary schools the group will target with a team of 10 volunteers at each school, Mayoliz added.

Following the Aug. 8 event, Mayoliz said that he has enough volunteers to create two teams of mentors. He was to meet with the volunteers in late August to decide which schools they will work with, Mayoliz noted.

While providing mentors at Monroe High School also is a possibility, he said that the Pillars model is designed for younger students. The volunteers can make a big impression to younger students just by how they carry themselves — their nice clothes and the manner in which they speak, added Gloria Aponte, an administrative assistant for the recreation department. Those kinds of impressions can increase the chances that the children will want to emulate them, she remarked.

"That sparks their minds to do more," Aponte noted. "This (program) teaches them about what they can do, … where they can go to school and what they can be. … Maybe we can make a difference in the Latino graduation rate."

Participating as a mentor "is not only important for the kids but it’s important for young professionals to share with these kids," Mayoliz remarked. "You really want to make a difference? Come and join us. I’m throwing down the gauntlet."

Tricia Cruz is among the group of Latinos who did respond and has signed up to be a Pillar of Hope mentor, she said in an e-mail.

"My greatest passion in life is to help people, especially children," added Cruz, a bilingual public relations consultant. "I hope to help the children by being a positive role model, by encouraging them to pursue their dreams regardless of what other people may tell them and to believe in themselves. It breaks my heart when I think about children who don’t have a strong support system in their lives. I’ve been so blessed in my life and I feel the least I can do is try to help other people."

Mayoliz said that he has mixed feelings about the reception of the program from the Latino community because he knows there are many more professionals who could make a difference in the lives of the children in city schools.

"So spreading the word of this program is the mission and getting more Latinos to take this pledge is our goal at this time," he added.

They won’t regret taking that pledge to become a mentor, said Barbara Lattimore-Walker, who did so last year. She said that she had long considered joining the program but questioned whether she could fit the mentoring duties into her busy schedule as a school counselor at Edison Tech High School.

But Lattimore-Walker said that she has received as much as she has given during the past year as a mentor and the experience has been "awesome."

"It gives me an inside edge into knowing our kids," she said. "And kids who are part of our urban community thrive when they receive supportive mentoring … at any level, whether from a professional counselor or teacher of someone committed to helping them."

And with many of the volunteers having grown up in the same neighborhoods as the students they’re working with, the program offers many opportunities to discuss what’s going on in the lives of the students, added Lattimore-Walker. And the overarching theme is that the conditions that both groups have experienced have not changed much, she noted.

"But I made it through school and later through college because someone cared enough about me and saw something in me," remarked Lattimore-Walker. "They believed in me, which helped me believe in myself. I try to offer the same (message)."