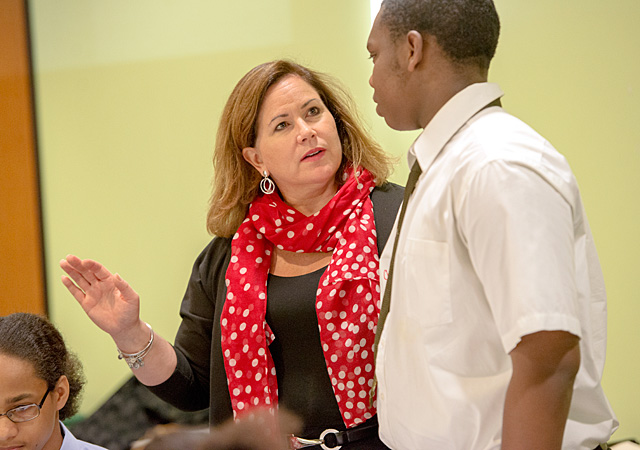 ROCHESTER — Nearly three decades ago, Wegmans Food Markets Chairman Robert B. Wegman and the Urban League of Rochester issued a call to action to turn around a city high-school graduation rate that had dropped to 30 percent.

The Wegmans Work-Scholarship Connection was born in response to that call. Since the program’s inception in 1987, more than 3,000 city students have found jobs through the initiative, which has helped 95 percent of participants graduate from high school, explained Augustin Meléndez, the program’s executive director.

Also since the program’s inception, the overall graduation rate in the Rochester City School District has risen to 43 percent, according to information recently released by the state education department.

While Wegmans still provides the program’s administrative staffing and has remained the anchor employer for participants, more than 30 area companies have signed on to provide jobs for students, Meléndez said. The program has expanded to include such cities as Syracuse, Buffalo and Prince George’s County, Md., he said, where Wegmans also has stores.

In 1996, the Hillside Family of Agencies joined the effort, and that same year the program was renamed the Hillside Work-Scholarship Connection to broaden the program’s outreach and employer base.

"This is not a Wegmans’ opportunity. This is a community opportunity," added Yolanda Benítez, who is employed by Wegmans to serve as director of the Work-Scholarship Connection’s Jobs Institute.

Robert Wegman had a vested interest in the program’s success, Meléndez said, because in 1987, his stores were seeing a high turnover rate and a lack of entry-level work skills among high-school-age employees from the city. So, he decided to provide scholarship opportunities to help motivate students to graduate and offered them the support of a youth advocate to help them succeed in school. The initial youth advocate worked with a group of 30 students, whereas today 130 youth advocates assist 3,000 students, according to information provided by Benítez.

The program also has amassed many success stories, Benítez said, citing one participant who graduated from college and became one of Wegmans’ highest-ranking merchandisers, and another who manages the chain’s highest-volume store, located in Fairfax, Va.

"In many cases, the advocate provides the only positive interaction (the student has) with an adult," Meléndez remarked.

The program specifically caters to city students who have any two of six risk factors: living in poverty, poor school attendance, failing grades in two or more subjects, difficulty passing Regents exams, high suspension rates and being older than their peers in a grade level.

"We are not taking the kids who perform really well," Meléndez remarked.

To suit the needs of more students, the program’s motto has become "graduation-college-career," Meléndez and Benítez explained. To help those students who may not pursue four-year college degrees, the program is looking to partner with companies that offer middle-skills jobs, such as manufacturing or fiber optics, that received attention regionally when Vice President Joe Biden visited Monroe Community College in January, they said.

Students who meet the AAA (academics, attendance, attitude) standard outlined by the Work-Scholarship Connection may apply for the Jobs Institute, which provides career exploration, and the Youth Employment Training Academy (YETA), which focuses on resume preparation and interview training, Benítez explained. She said those students also are guaranteed job interviews with the program’s employer partners: Wegmans as well as Unity Health System (which recently merged with Rochester General Hospital), University of Rochester, ESL Federal Credit Union, Rochester Institute of Technology, Staples, Delta Sonic and Tops Friendly Markets. Earthlink is the latest company to join the list, she added.

Currently, about 140 students are employed by the University of Rochester, which proved to be one of the more difficult employers to enlist several years ago because it traditionally does not hire minors, Meléndez said.

Unity joined on eight years ago when the president of Hillside contacted the hospital system to explain the benefits of being a community partner, explained Natalie Chao, a Unity spokeswoman. And since becoming a partner, the health system has employed as many as 20 students a year in food service, environmental services and other support areas, she said.

When she arrived for a May 31 YETA session, Louise Vella, Unity’s director of work and leadership development, asked students to state their names and describe themselves.

The students went on to describe themselves with such adjectives as respectful, bilingual, adept at multitasking, determined, dependable and reliable.

Vella shook hands with those whose introductions impressed her and guaranteed them a personal interview.

"Every day, life gives you an opportunity to make an impression through your presence or lack thereof," she said. "Every day is an interview."

Rico Anderson, 16, said he hopes to stand out to potential employers and was proud to have done so with Vella, becoming one of the students she guaranteed an interview.

Rico, who in May completed his junior year at Robert Brown High School in Edison Tech, introduced himself to Vella as having a great personality and being very reliable.

"I can bring that to her workforce, that is a fact," he said with a thumbs up.

Rico said he had never considered applying for a job at Unity until hearing Vella’s presentation. He noted that the Hillside program has offered him many opportunities to mature as a person and learn about career options.

He also learned the value of hard work when he successfully got into YETA, which requires at least a 2.0 GPA. And he said he is sure that the program will help him be successful in whatever career he chooses.

"Hillside will be better for me (for) my future," Rico said. "When I get older and look back, if it weren’t for Hillside, I wouldn’t be there. I am confident in myself. I’m going to get there."

During a May 31 session at the Hillside Conference Center on Mustard Street, students wore business-appropriate clothing for a "Dressed for Success" parade. In small groups, the students marched to the front of the conference room to have their outfits assessed by their fellow students and instructors Iris Freeman, Jorge Degro and Dan Ercolino.

The academy teaches the students about resume writing, appropriate employment behavior, searching for a job, interviewing, teamwork and interviewing. The process even includes a mock interview with community volunteers, Benítez said.

Ruben Ruiz said that before the program, he did not know how to write a cover letter, put together a resume or how to appropriately contact a potential employer.

"You’ve got to be a good communicator when you apply for a job," added Ruben, an incoming junior at School Without Walls. "And know what you want to do."

The Work-Scholarship program helps prepare students for future careers, noted Trevon Harris, who will be a junior at Van Guard High School. But it also helped turn his grades around, he said.