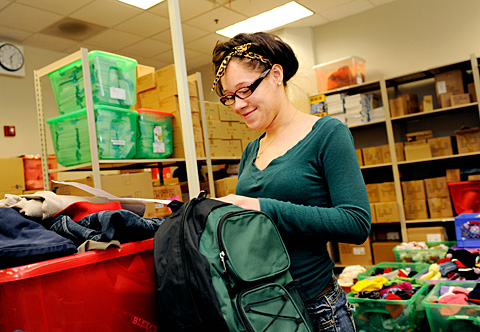 ROCHESTER — Kelly Colón plans to enlist in the U.S. Navy, but she doesn’t know how to swim.

Swimming is just one more obstacle she will overcome in her family’s nomadic journey over the past few years, from living in homeless shelters in New York City, to a nightmarish stay at Rochester’s Cadillac Hotel, to a home on Central Avenue and high school graduation this spring, Colón said during an April 1 interview. And the family credits the Rochester City School District’s program for homeless students with changing the course of children’s lives for the better.

Her parents first moved from Puerto Rico to the Bronx for a fresh start when Colón was a baby, she said. And the growing family had a stable home life for 15 years. But things turned upside down when building code violations forced the family to vacate its apartment, explained her mother, Jamie Clarillo.

Finding a new apartment meant she and husband, Kelvin, would have to come up with thousands of dollars for rent and a security deposit, Clarillo added.

That was money they didn’t have, so months of going from "(homeless) shelter to shelter to shelter" followed until the family moved to Rochester two years ago, Colón said. A relative said that rent here would be cheaper and offered to help them out, Clarillo added.

The challenges continued, though, as the family moved in with their relative and was soon asked to leave, Clarillo explained. She said that she began making phone calls to social-services agencies and was connected with Elizabeth Reyes, associate director of the homeless program.

In addition to helping enroll five of the family’s seven children in school, Reyes said that she referred the parents to PathStone for housing assistance.

"It was great," Clarillo said of Reyes’ guidance and referral, which led to the family getting its current home. "They helped the kids with school supplies, uniforms, … everything."

The primary responsibilities of the district’s homeless program is to immediately enroll a student in classes and provide the student with transportation, meals and clothing, if possible, explained Audrey Lewis-Cummings, director of social work/homeless program.

The district has had the program in place for nearly two decades and follows the tenets of the federal McKinney-Vento Education for Homeless Children and Youth program, she said. The law, which was first enacted in 1987, was revised in 2001 to follow guidelines under the No Children Left Behind Act, added Lewis-Cummings.

According to www2.ed.gov/programs/homeless/guidance.pdf, the McKinney-Vento states that:

* districts are prohibited from segregating students who are homeless;

* students are to be immediately enrolled in the school requested by parent or guardian; and

* a liaison must be designated to work with homeless students or families.

"We help the family by making sure that the law that’s enacted (is followed) and that all their rights are preserved," noted Lewis-Cummings.

There are many reasons and situations for why a student or an entire family may find themselves homeless, she added. Parents may lose their jobs or be forced into a relocation, she said. Or, they may lose their house to a fire or be evicted because of housing code violations as the Clarillo-Colón family was, added Lewis-Cummings. A mother also may be fleeing domestic violence, she said.

"Unfortunately, things are not getting any better," Lewis-Cummings said. "Every year, our numbers increase. It’s heartbreaking."

Reyes concurred. She said that in her three years with the program, the number of students receiving services more than doubled from about 900 to nearly 1,900 last school year. And the district is on track to serve nearly the same number of students this school year, with only a few repeat students from the previous year, she added.

Those numbers include the many students who come from out of the state or even out of the country, Reyes said. More than 100 languages are spoken in the district, which has seen large influxes of families from India, China and Burma, she added.

Many of the stories she hears from students like Colón break her heart, she said. One student she worked with had walked from El Salvador and made it to Texas, where he connected with a Catholic Charities program that brought him to Rochester and placed him with a foster family. When he recently told her that he misses his mom, Reyes said that she could hardly hold back her tears.

"It’s crazy he even made it," she said. "He has no friends and can’t get in trouble at his high school or he’ll be deported."

Other young students and even families "couch surf" at the homes of relatives or friends, added Lewis-Cummings.

One girl in such a situation was thrown out of her home at age 12 because her mother was addicted to gambling, added Reyes. But the girl kept going to school and doing her work, which proves the resiliency of these children, she noted.

Those stories also illustrate the necessity of the homeless program, Reyes noted.

"The safest place for a kid is school," she said.

But the constant moving around for Colón meant that she was falling behind at school. And when her mother did enroll the children, there was only a month left in the school year, she added.

Colón began her junior year at All City High School, making up the credits for her sophomore year, and the pattern continued at the start of this year, she explained. But now, she is on track to graduate in June and go on to boot camp and Navy training school, Colón added.

At boot camp, she will finally learn to swim, Colón said with a smile. She was scheduled to take a military entrance exam in early April.

"If I was still over there in New York City, I wouldn’t have come this far," Colón remarked.

Thanks to the district’s homeless program, she found not only a path to success but opportunities to give back, as she did on April 1 helping Reyes organize the donations that are part of the program’s clothing service. She and her brother also have helped at the program’s former summer camp, Reyes added. Clarillo also helps out any time she can, she said.

Colón has even gone on to speak at a local McKinney-Vento conference about her family’s journey. She hopes other students who may have to overcome similar circumstances see that they are not alone.

"You get over it," she said with tears streaming down her face. "You meet people that will help you someday."