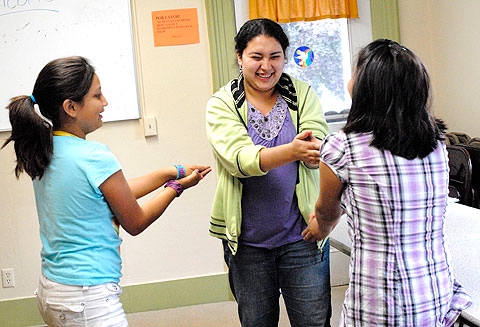 The trio then presented their idea for an ad to promote being healthy and active as part of the summer program run by Cornell University students at Our Lady of Guadalupe Mission at St. Gregory Church on July 28. The following weekend all of the children would be making presentations to their parents on nutrition and wellness — including showing off their ads, explained Pilar-Alicia Parra, a research associate and senior lecturer for the university’s division of nutritional sciences who oversees the summer program.

Liz said that she enjoyed learning more about nutrition and doing activities with the Cornell students, including a label scavenger hunt and snack preparations.

"We can make sure there’s a healthier side" to all meals, added Liz, 14.

"The kids in Marion, they look up to me," she noted.

Introducing children from migrant worker families to higher education was one of the goals of the program, which also is part of a decade-long study on immigrants, Parra said. Three Cornell students offered lessons on nutrition, exercise and cultural identity and conducted interviews with the children to gather their input on those topics, she added.

That input will become part of the research project on immigrant integration in rural areas conducted by Parra and Max Pfeffer, an international professor of development sociology and senior associate dean at Cornell’s College of Agriculture and Life Sciences. The reports they generate will be available online to offer information to any groups working with immigrant families, Parra said.

"What can communities do to favor incorporation of these new people?" is one of the questions the research is looking to answer, she added.

Institutions that favor such incorporation tend to include schools and churches, but both have limitations, she explained. For example, parents face barriers of language and transportation when it comes to being involved in their children’s education, Parra said. And churches tend to be segregated by culture but still play an important role in linking immigrants to a community, she noted.

"Immigrants who are able to establish … relationships with residents will do better," especially in terms of finding jobs and housing, Parra remarked.

Parra chose to work with the migrant population of Wayne County because of her own friendships with Sister Luci Romero and Father Jesus Flores first established when they were at Church of the Epiphany in Sodus and now in Marion. As part of talks with them and parishioners at the churches, she decided to expand the project and create activities based on their feedback, Parra said.

And one concern expressed by many of the families was the children’s rapid change in diet, she added.

"They quickly don’t want traditional foods," Parra said she has heard from mothers. "They want pizza and burgers."

Those changes can quickly lead to such health problems as obesity, she said. So last summer, a graduate student led workshops with parents on healthy "American" foods and snacks, the concept of which is unfamiliar to Mexican immigrants, Parra noted.

The parents then asked Parra to offer something for children, which is how the summer program was born, she added. And in addition to teaching healthy eating, the goal also was to offer information on navigating the difficult path to identifying as an American while maintaining pride in their heritage, Parra said.

"We want to create self-empowerment and self-assurance," she said.

Roxana Orellana, a Cornell senior, understands that challenge, as her mother is from El Salvador. She and fellow students Nicole Salach and Brooke Parsons led the summer sessions.

"We are role models for them," Orellana said. "And working with the kids has been wonderful. They’re so nice and they go with anything we ask of them even if they’re not sure at first. And they’re enjoying the activities because they keep coming back."

And it’s been a learning experience for her as well in organization and patience, she added.

"As long as this is fun and interesting and they learn something, it’s (been) successful," Orellana said of the program.

Ten-year-old Daniela Santacruz agrees that the program was educational and fun.

"They show us kids of healthy recipes we can make and that we have to be active," she said. "Plus, they showed us a lot of fun games."