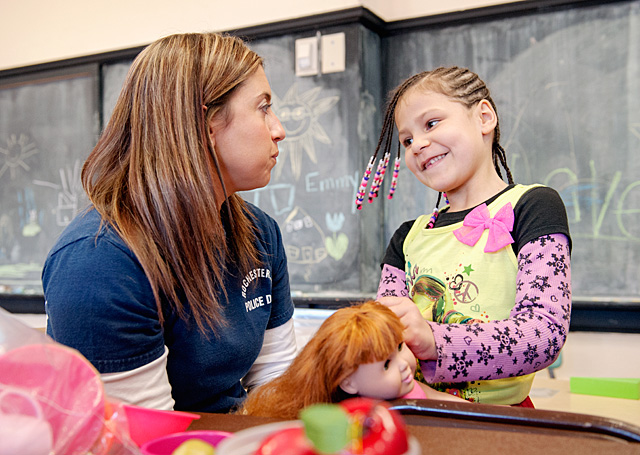 ROCHESTER — Seven-year-old Jayla Simms clung to Amy Bauer as her classmates ran up to greet the Rochester police officer.

Bauer is one of several officers who have volunteered at Henry Longfellow School No. 36 as part of the Generation Two program, which pairs adult volunteers with first-graders for weekly half-hour, small-group sessions of creative play. The April 24 session with Jayla and her classmates marked the final time they would meet.

This school year marked Bauer’s second as a G2 volunteer. And what proved to be different this year is how some of the students, like Jayla, became very possessive of her as their friend, she explained.

These relationships are so unique that the children sometimes have difficulty understanding that their friend also plays with other children in other groups on the days they volunteer, explained Melanie Mroz, Generation Two’s program director.

"It is such a special relationship and a unique situation," she added. "And we all need that lesson in sharing at times regardless of (how old) we are."

Bauer, who wore plain clothes when she began volunteering this school year, said that the kids were largely unfazed when she arrived dressed in uniform in January. The concept behind appearing in plain clothes is to have the students get to know the officers as just regular people, she said.

"Kids naturally gravitate to us at this age anyway, but this is another way to reassure them that we’re out there to help people and protect people," she said of police officers. "We are just like them, with or without a uniform. "

Building those kinds of positive relationships is so important as a police officer that she also encourages other officers to volunteer, added Bauer, who provided sticker badges in the end-of-the-year gift bags that she helped pass out to the children.

"It gives you a chance to connect with the community outside of police work," she noted. "And it’s a feel-good experience."

The program also gave her an eye-opening experience when she accompanied the school’s Generation Two students to the Strong Museum of Play at the end of March along with other volunteers.

"The kids were everywhere," she joked. "It was exhausting."

Providing a place where children get their energy out and have an adult’s undivided attention is at the heart of the Generation Two program, Bruce Gilberg said in a December 2013 El Mensajero Católico article. He introduced the program to area superintendents 11 years ago, and the Fairport school district immediately signed on. Two years later, Rochester signed on for School 36. The Rochester Police Department officers joined the program in 2012.

Beginning next fall, the program will consolidate its 80 volunteers to Nathaniel Rochester School No. 3, Mroz explained. Two of the city schools where Generation Two operates are slated to close, she said, so the timing seemed right to accommodate the district’s request to create a multiyear mentoring experience for the children.

"I think it will make a bigger difference," Mroz noted. "Wherever possible, we will have children paired up with the same adults they worked with in the past. So, if all goes well, a child could have the same adult in their lives for three years."

"I’m feeling kind of sad that this room won’t be here anymore," said Swinburne, who has volunteered at the school for two years. "I really like this school. … I’ve had wonderful relationships with the kids here."

Through those relationships, students in the Generation Two program also have been able to develop socially as well as tap into their creativity, said School 36 first-grade teacher Raquel Hawkins. And that is especially important because the school day doesn’t offer a lot of those opportunities, she added.

"They get to express themselves (in Generation Two)," Hawkins said. "It helps them socially to get along with peers and with adults. … They get to go up there and enjoy themselves and have a good time."

By guiding the play, which is another element of the program, the students also become more independent, Hawkins said. And the one-on-one attention from an adult helps make up for any attention they may lack at home, she added.

"Everyone who volunteers is taking the time with them to show them love and caring," Hawkins remarked, adding that the students who worked with Bauer also experienced the caring side of police officers like her.

"I’m sure they will remember her," Hawkins said.

Inger Williams, School No. 36’s Generation Two coordinator, said that the girls also have had a great role model in Bauer.

"It’s play and it’s relationships and that is really great," she said.

Because of Bauer, 6-year-old Denali Castro said that she now she wants to be a police officer. Denali said she used to want to be a doctor.

She was surprised when Bauer came dressed in uniform for the first time, adding that police officers are "cool."

"They come and take people to jail and then help the person that’s in trouble," said Denali, on whom Bauer placed a badge sticker before she left the Generation Two room and the two hugged goodbye.

Angelea Sánchez, 6, said that she used to think police officers were scary before she met Bauer and was surprised that she had a gun on her uniform belt. She especially liked "playing with the babies" with Bauer.

Sabrina Pagan, 7, said that police officers are "perfect except when they kill people."

But working with Bauer and being in Generation Two helped her learn more about what police do, she said.

"Now I know that police are good," Sabrina said. "Miss Amy is kind. … G2 is the most perfect place I’ve ever been to in my entire life."