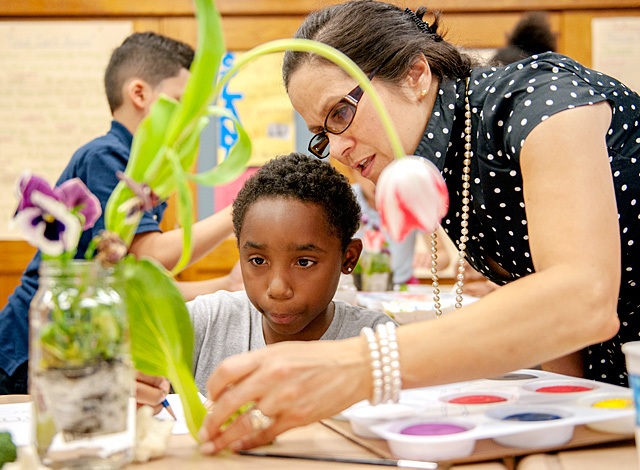 ROCHESTER — When Heather Fiore asked who liked blueberries the most out of the trio of fruits and vegetables that the fourth-graders in Linda Lynch’s class tasted, many of the students’ hands flew up.

A few liked the peppers. Some liked the red lettuce, and most raised their hands when asked if they liked the celery from the previous week’s tasting.

The tasting is the first step in the new Art4Eating curriculum that Young Audiences of Rochester created to teach nutrition and help young students and their families develop healthy eating habits, explained Annette Ramos, YA’s manager of educational services.

The art aspect comes in when days later, Michelle Cardulla, who is an artist as well as publisher of Lake Effect magazine, helps the children draw and paint the different foods they are tasting.

"It’s really kind of awesome to see what they create," Lynch said.

Third- and fourth-grade classes participated in the pilot project that took place this past spring, Ramos said. The program will continue at School 46 with some revisions offered by the teachers this fall, she noted. YA also hopes to eventually expand into more schools, she said.

"We take for granted (certain) kinds of things, like some kids have never gone to a garden or planted anything," Cardulla said. "The concept of things growing in the ground is abstract for them. This is what this program is all about. Hopefully, they will garden and grow their own stuff and get the joy of that and joy of cooking too."

The arts-integration program also aims to educate students about the science of growing fruits and vegetables, Ramos said, as they plant seeds and eat them and learn about photosynthesis. And they learn about the chemicals contained in the other foods they eat, as Fiore reviewed a food label with Lynch’s class during a May 20 session. Fiore is a health project coordinator for the University of Rochester Medical Center.

"They have a chart that they take home that tracks the different colors (of the foods) they eat," Lynch added. "The mission is to eat as many colors as they can. … They’re trying to eat a rainbow."

More colors in one’s meal means more nutrition, Fiore explained to the students. So, the red leaf lettuce has more nutrients compared to the celery, she said.

And she asked the students to think about what happens when they make a green salad with celery and ranch dressing.

"So you think you’re eating healthy but you’re not getting a lot of nutrition," Fiore said. "But try mixing it with red leaf lettuce … and it’s more nutritious."

"It’s good to taste everything so you get to know what (things) taste like and how good it is," she said.

Jayla Araujo, 10, said that she didn’t like lettuce before trying some in class. She also said the project helps the students.

"So, when you grow up, you’ll be healthy and strong," she said.

A week later on May 29, when Cari Mezzoprete’s third-grade students walked in to their classroom, they were just as excited about what they would be painting as they had been about the foods they had been trying out.

Cardulla said that the students would be painting a "still life" portrait of any part of a centerpiece she had placed in each quadrant of desks — pink and purple tulips and pansies in small glass vases and the cauliflower and bok choy that encircled the flowers.

Third-graders Jordaan Taylor (left) and Lamia Sharf work on paintings flowers and vegetables during a May 29 art lesson at Rochester’s School No. 46.

The students had tried bok choy earlier that week, in addition to baby spinach and chard, said Mezzoprete.

"What I really like about the program is they do get exposed to different vegetables that they haven’t been exposed to before," she added.

Cardulla said that the flowers they were using are also edible, which elicited an "ewww" reaction from the students.

"But it’d look pretty in a salad," she replied.

The kids also had a hard time resisting touching their subjects as Cardulla advised them to study all the colors in the centerpiece before drawing and then painting. "You know how we read closely and look for details, that’s what we’re doing now," noted Mezzoprete. "I believe you can do it."

Cardulla acknowledged that the task was a challenge, as some students struggled with dimension and color.

"Painting is not easy, but it’s fun," she said.

Mehmetali Tamcan, 9, filled his entire page of white paper with the tulip in the vase of water. He chose the tulip because it’s "really pretty," he said.

"When I was little, I used to eat everything," he said. "Since then, I don’t like them (vegetables) that much."

Nedi Santiago also painted the tulip because of its beauty. She said she likes to try new things, such as different fruits and vegetables as well as painting the bok choy, which she tried for the first time.

"It gives you a lot of energy," Nedi said.