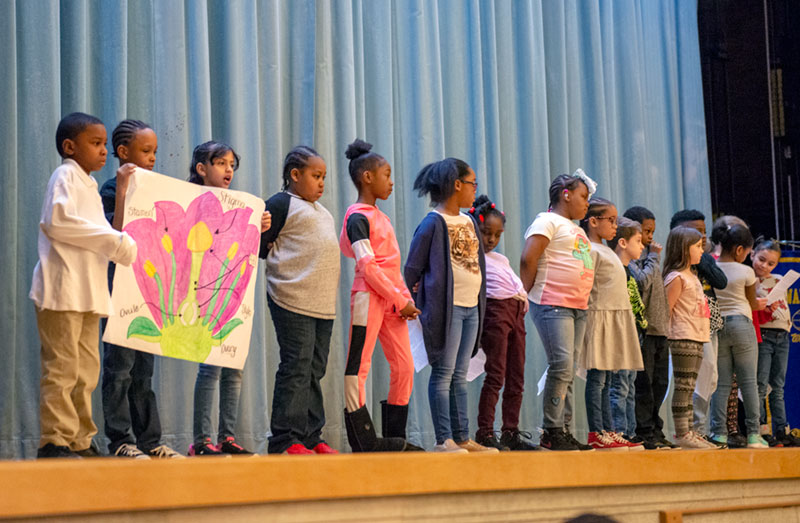 Students at Dr. Walter Cooper Academy School 10 present the anatomy of a flower during a school assembly April 5.

The Rochester City School District recently submitted to the state education department an action plan for improving 10 of its low-performing schools.

Prior to submitting the plan, the schools’ community engagement teams conducted public forums in February to garner feedback on how to improve the schools. The schools have been newly classified as being “in receivership,” according to the New York State Education Department, which released its list of receivership schools Jan. 17 as part of its biannual accountability determinations for districts and schools across New York.

What are receivership schools?

Schools are deemed “priority schools” if they are among the 5 percent lowest-performing schools in the state, as identified by the NYSED. Schools can be removed from the priority-schools list if they make sufficient academic improvements within two years, according to the NYSED. If these schools fail to make demonstrable progress, they are classified as being in receivership.

According to information from New York State United Teachers (http://bit.ly/2FjOCtu), schools are placed into receivership because they fail to make demonstrable progress in student achievement during their prior years as priority schools.

According to the NYSED’s list (http://bit.ly/2Cr0sl1), the following RCSD schools have been newly classified as being in receivership for the 2019-20 school year because they did not make the progress necessary as priority schools last year.

According to a Feb. 1 press release from the RCSD (https://conta.cc/2JwgjEU), these schools are now classified as “Comprehensive Support & Improvement Schools.” The schools have been placed into “superintendent receivership” and must show demonstrable improvement or they will be placed into “independent receivership,” according to the RCSD press release.

In deciding whether such improvement has been made, the state commissioner of education will consider each school’s performance on such metrics as student academic performance, the number of years that the school has been identified as a priority school and whether superintendent receivership was successful during the school year under receivership, according to the NYSED (https://bit.ly/2HVP058).

Now that the district has submitted its action plan to the NYSED, the 10 schools new to receivership will have two years to meet improvement targets, according to the RCSD.

The action plan (https://bit.ly/2CsGypQ) outlines the following five guiding principles and goals for improving the 10 new schools in receivership:

1. High standards, rigorous curriculum and powerful instruction, with the goal of providing students with a standards-based, balanced curriculum to ensure students reach their full potential. (For example, using newly created resources that are culturally appropriate and relevant.)

2. Systems of support that meet student needs, with the goal of creating a positive classroom and school climate that promotes the development of social-emotional competency. (For example, knowing every child by face and name.)

3. Committed and effective teachers, leaders and staff, with the goal of implementing the best practices for teachers to empower students. (For example, providing ongoing professional development for school leaders.)

4. Engaged and empowered families and community, with the goal of empowering families and the community to become part of student education. (For example, engaging families in activities at the school.)

5. Sound fiscal, operational and accountability of systems, with the goal of resource allocation that will secure a high quality of education for students. (For example, having a smaller budget deficit.)