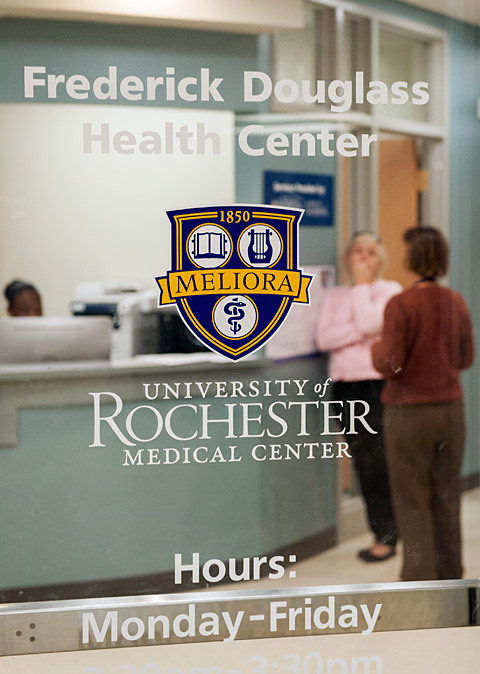 The center represents a community partnership between the school district and the University of Rochester’s school of nursing and medical center, said Mary Aronson, principal of the Northwest College Prep middle school on the campus. Through the partnership, the district also operates a health center at East High School, which has been providing care for students since the 1990s, said Kim Urbach, a nurse practitioner who oversees both centers. Another health center is run by Threshold on the Benjamin Franklin High School campus, Aronson said. The district also recently reopened a school-based health clinic that had undergone renovation at Martin Luther King Jr. School No. 9, according to school officials.

The nurse practitioners on staff at the East and Douglass clinics not only offer acute care for the 1,200 students in grades 7 to 12 but management of such conditions as asthma and diabetes, Urbach said. Many students on the Douglass campus suffer from type I diabetes and must be "fairly closely monitored," so the center is a welcome addition, Aronson noted.

"It is comforting for me to have a person with medical knowledge in case of emergencies," she said of Amy Meredith, the nurse practitioner at Douglass.

"That is really important for people. Because even if they have insurance, sometimes copays are really an obstacle," Urbach added. "Sometimes, families (and their schedules) are chaotic and prescriptions don’t get picked up. We really want to be able to do everything the patient needs that’s within our power."

The centers, which operate as a "nurse-managed model," will serve as primary care for families who don’t have their own doctors, Meredith said. Mental-health services, including counseling, are offered through collaboration with local psychiatrists, Urbach said. And the new center hopes to offer dental services as well, added Aronson.

"If they have asthma, we will supplement and complement what happens with their primary care physician," she said. "Or for families who move into the district, we get their (children’s) immunizations updated so they can stay in school and be successful right away."

As the district moves to expanding sports offerings for students, the convenience of having students complete their physicals at the school’s health center also will help with that goal, Aronson added.

"We can get more kinds involved in sports," she said.

"In the past, we looked at whether children who have access to school-based centers have more time in school," she said. "We found that they have three times more seat time if they have health access."

To access those health services, however, families must enroll their children at the center, Aronson and Urbach explained. At East High, 85 percent of students are enrolled and the center conducts more than 4,000 visits a year, Urbach said.

Millie Quiñones-Dunlap enrolled her son, Triston Dunlap, as soon as the center opened at East High when he was in seventh grade, she said. Triston is now a senior.

"From the experiences I’ve had, the staff has been really helpful," said Quiñones-Dunlap, who is the East High librarian. "Before I worked here, there was another time when my son hyperextended his knee. They called me at home and let me know that this looks like something more serious. They’re very easy to talk to, accommodating and informative."

Most recently, her son dislocated his finger during a class activity, she said. The health center recommended that she call her family doctor, who told her to take her son to the emergency room.

"It is comforting to have this on-site facility," noted Quiñones-Dunlap.