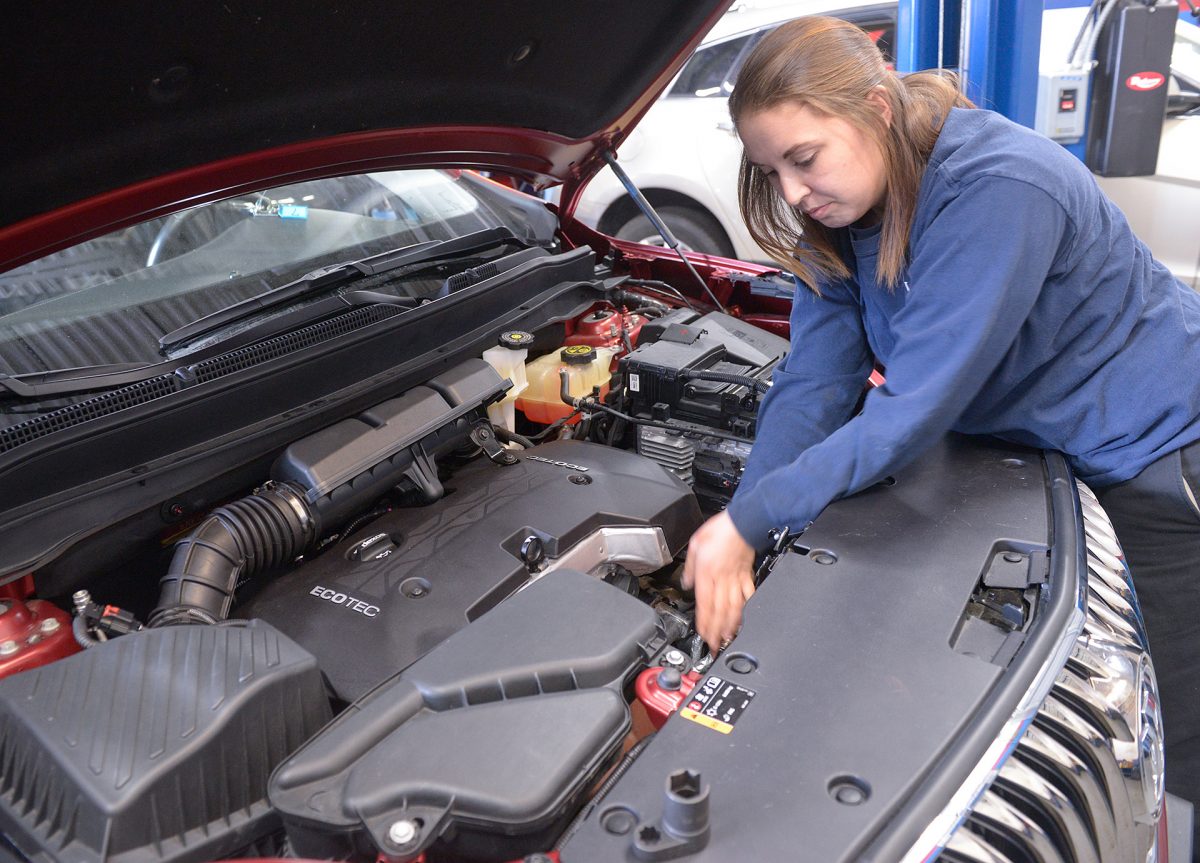 Niki Davey works to remove an O2 sensor from a vehicle for testing during a class at the MCC Auto Tech Program on Oct. 18, in Rochester.(EMC Photo by John Haeger)

HENRIETTA — Automotive service technicians are in high demand across the country.

Technician jobs in the auto industry are projected to grow nationally by 6 percent into the next decade, with nearly 46,000 new jobs opening up between 2016 and 2026, according to information from the U.S. Department of Labor (https://bit.ly/2ACl7SH).

To help meet those employment needs, Monroe Community College has been working with auto dealers in western New York since the 1980s. A report by the college projects annual growth of 233 jobs locally in the industry over the next several years (bit.ly/2qrEbgs).

The auto technician program at MCC began as a generic program in 1979 until several manufacturers, including Ford and Nissan at the time, approached the school with potential partnerships to expand its training, explained Doug Rivers, associate professor of automotive technology. Currently, the college offers a General Motors Automotive Service Education Program (GM ASEP) and a Toyota/Lexus program, according to monroecc.edu.

According to a statement from Mike Zafonte, regional training manager for GM’s Northeast region, supporting programs like the one at MCC helps ensure long-term success for the auto industry.

For MCC’s auto programs, Rivers and his staff recruit students from high-school automotive classes. If they meet the academic criteria, students then are interviewed in order to gauge their interest in pursuing careers in the industry, Rivers explained.

Suitable candidates are then asked to seek out sponsorships from local dealerships in their marketplaces.

“The goal is to get students to sell themselves,” Rivers said. “And the dealer has a say (regarding) investing time, resources and energy into a candidate.”

The dealers who participate accept the students as apprentices to further develop their training, he said. Students are generally paid for on-the-job training as they complete their coursework at MCC, he said. Most students receive about $13 per hour for their apprenticeships, and some dealers also assist students with tuition, Rivers noted.

The jobs make the program affordable for the students, he added. And upon graduation most students are hired by the dealers that have sponsored them, Rivers said.

“There’s no one way, no one answer, for what defines success, but (with GM ASEP) you can earn while you learn,” he said.

MCC’s program partners with GM dealers throughout upstate New York, including in Buffalo, Syracuse, Ithaca and Rochester, he said. The jobs are in such high demand that he has received calls from dealers as far away as New Hampshire, Rivers noted.

“In smaller markets, or where it’s more rural, it’s hard for them (dealers) to find people,” he said. “We do try to target recruitment because we find statistically a high number of people stay within their communities.”

“It gives us the opportunity to take an individual with little to no technical experience, and through a partnership with the college, develop this individual into a technician,” he added. “We have several long-term technicians that … went through this program that have developed (into) great technicians for us. In this current market, we have found it difficult to find experienced technicians to hire, so this is why we find value in working with an individual from the beginning.”

Having students train on cars that are no more than five years old also boosts their employability, Rivers said. Most of the students leave the program with skills that are above entry-level work, he said, noting that about 20 percent of the program is lectures and the majority is hands-on training.

Once the program is done using its donated vehicles, the cars are redonated to area high schools for BOCES programs, he said. If the vehicles are not donated, they are destroyed, as none are resold.

“So, those high-school students get a good vehicle to work on, and we hope they will transition to our program,” Rivers remarked.

Getting real-work experience before graduation attracted Niki Davey, 24, to the program. She also likes the variety of the training, from rebuilding engines one week to working on brakes another, she added.

After high-school graduation, Davey said she worked as a preschool teacher, but she wasn’t happy. In researching other options, she came across the GM ASEP program.

“It felt like something clicked,” she said. “This is what I was supposed to do.”

She attended an information session, and everything fell into place from there, Davey said.

Classes are small, which also is a plus, Davey said. Graduating classes range from 22 to 26 students, Rivers said.

“Smaller is better because you get more help from your teachers,” Davey said. “If you don’t understand something, teachers are so willing to help you understand. … They’re just great teachers.”

Davey, who plans to graduate next spring, noted that she is proud to be in a class with three women, especially since all have heard comments that they’re doing a “man’s job.” Gender has nothing to do with fixing cars, she said, and this work is in her genes, as her grandfather was an auto technician for Ford his entire career. She fondly remembers handing him wrenches as a kid when he worked on cars in his garage, she added.

In her apprenticeship at Van Bortel Chevrolet in Macedon, Davey is partnered with a master technician to hone her skills.

“This program for me changed my life so much,” she said. “It’s given me that spark in my life back. I’m excited to get up and go to work and school. It’s something new every day.”