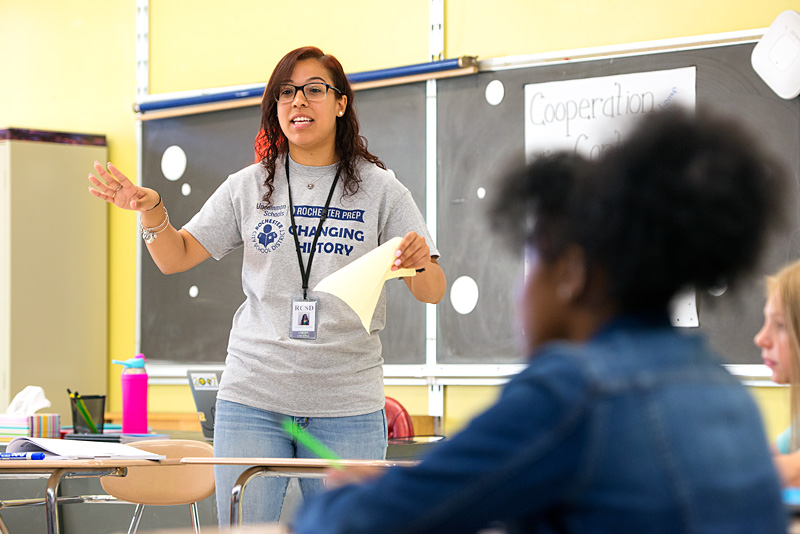 ROCHESTER — Students and staff at a Rochester Freedom School start the day with a Harambee — a kind of pep rally to review the school’s core values and highlight good deeds and positive behaviors.

During parts of the Harambee on July 19, students stood and cheered. At the end, they sat in a circle to hear announcements and other news about the school, which is located in the Rochester City School District’s Charles T. Lunford School No. 19 building.

Among the teachers were two college students interested in pursing teaching careers. They were assigned to the Freedom School’s summer-learning program through an organization called Uncommon Schools. The Rochester school district partneredwith Uncommon Schools to offer college students of color from around the country 23 Summer Teaching Fellowships to teach in city schools from June through August.

Incorporating classroom experience and tailored professional-development opportunities, the fellowships are designed to introduce college juniors to teaching and the reform of urban education, according to the website (http://uncommonschools.org) of the national organization, which operates a network of free, public charter schools in Boston, Newark, Camden, Brooklyn, New York City and Troy, N.Y.

Through the fellowship program, potential teacher recruits develop the skills needed to lead high-achieving urban classrooms as they receive mentorship, collaboration and hands-on experience, according to the website. The fellowship program was established in 2007 to encourage college education majors — especially black and Latino candidates — to teach in urban schools, according to RCSD officials.

Djinga King-St. Louis, principal of the Rochester district’s Freedom School, said the district is focused on hiring qualified candidates for all of its teaching positions, but noted that filling vacancies with more teachers of color also is important. So when Uncommon Schools approached the district about adding Rochester as a site for its fellows, the partnership was mutually beneficial, she added.

"We’re always seeking a diverse population of teachers," said King-St. Louis, who was part of the committee that interviewed all of the college students chosen for the Rochester fellowships.

"We want our students to see professionals who look like them and are engaged in making literacy be more culturally responsive," King-St. Louis remarked. "We need to have teachers who can relate to our students on many different levels."

Michael Harris, one of this year’s fellows at the Freedom School, said his group of middle-school-age students is no different than the kids in the neighborhood where he grew up in Washington, D.C.

He said understands that his students are observing everything about him — how he carries himself, where his pants sit on his waist, even his hair — noted Harris, a student at Howard University. Being a teacher isn’t just a job, it is a way of life, he added.

"I want to show them that you don’t have to (fit) into stereotypical roles," he said of being a minority in this country. "I want to motivate people."

Harris, 22, hopes he will be offered a permanent job at one of the Uncommon Schools’ charter schools. He is especially interested in the school in Brooklyn.

"I’m a city guy," he said. "You understand where they (students) come from and what they go through. … They need to see people like me."

Crystal Colón, another fellow at the Freedom School, said she also wants to be a role model for students. An East High School graduate, she attends the University of Rochester with plans to study for her master’s degree at the Warner School of Education.

As a Latina and a Rochester-district graduate, Colón, 21, said the fellowship has shown her how important it is for students to be taught by people like herself.

"I graduated from East and yes, I’m at the UR," said Colón, who hopes to teach in Rochester schools. "It’s possible. (The students’) backgrounds or socioeconomic (status) or the color of their skin don’t decide their future. It comes from within, your heart and hard work."

She said she always loved school but didn’t think about being a teacher until her sophomore year of college when she worked in the Upward Bound program at UR during the summer of 2014, Colón said. That program provides academic and other types of support to lower-income students who want to pursue college educations. Colón applied for an Uncommon Schools fellowship in Rochester upon learning that it would enable her to pursue a master’s degree tuition free and be guaranteed a teaching position.

"It was the perfect fit for me," she said. "I felt like I really needed a good teaching experience. … I’m blessed to have been one of the people (Rochester district officials) chose."

In addition to receiving professional development and mentoring from teachers, the fellows spent a week in Brooklyn before the program began July 5, learning about the Uncommon Schools’ mission to prepare low-income students to attend college. The fellows develop their own lessons plans and practice managing student behavior in their classrooms, explained Colón explained, who has been working with a group of sixth-, seventh- and eighth-grade student.

The summer-learning experience also is giving fellows exposure to the challenges teachers face in helping students in urban districts, who require a lot of support and love for issues they face that are bigger than the classroom, Colón observed.

For example, during a discussion about the word "hope," some of her students talked about hoping the power comes back on so they can have light or hoping for a bathtub full of water because the family’s water was shut off.

"There’s a new challenge every day," she said of her summer-teaching experience. "Those (challenges) are helping me grow as a teacher."