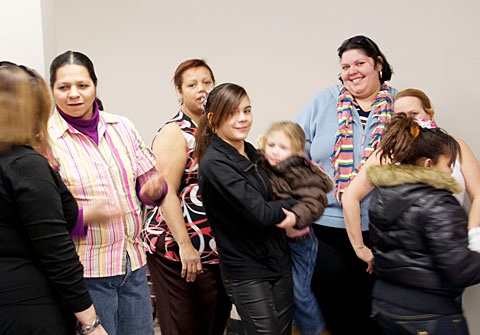 ROCHESTER — When Dorothy Evans-Flaherty was hired last year to head up the city school district’s office of parent engagement, one of her first moves was to hire Maria Encarnación as a community liaison.

The two had worked together at Monroe Community College, and Evans-Flaherty said that she knew Encarnación had both the necessary knowledge about the Latino student population and connections to families living in the district.

"She would bring a familiarity already to our community," Evans-Flaherty added. "Folks would be comfortable with her. And relationships are key to working with a lot of our folks."

Brenda Ramos, who is slated to become the next president of the district’s Bilingual Council, can attest to that. Ramos said that she turned to the parent engagement office when two of the five children she is raising — one is a niece — faced bullying situations in their schools. The parent engagement staff stepped in for support and advice to resolve both cases, she added.

"They have helped me and have gone with me to speak with the principals," Ramos noted.

The office has transformed over the past year with the addition of bilingual staff members such as Encarnación to better meet the needs of the district’s Latino population, said Gladys Pedraza-Burgos, director of the district’s Youth and Family Services Division that oversees the Office of Parent Engagement. About 22 percent of the district’s 31,000 students — more than 7,100 — are Latino, according to https://www nystart.gov.

"We’ve never been staffed at that level before," she said of the additional bilingual staff members. "That’s huge."

Encarnación has lived in Rochester for more than two decades after moving here from Puerto Rico where she had worked as a teacher for students with learning disabilities. Since moving here, she has worked as a physical therapist and a program adviser for a work and learn program run by Monroe Community College and the Monroe County Department of Social Services. She also worked for the YWCA’s Young Parents Support Services.

"I’m familiar with parent challenges as well as the child challenges," she said.

Evans-Flaherty, who worked for 17 years as a faculty member, administrator and mentor for MCC, said that she also is familiar with the district’s student body through her experience at the Damon city campus.

"Immediately, when I came into the (parent engagement) office, I knew we really needed to broaden the scope of our services and be more inclusive for all of our families," she added. "We needed to communicate quickly."

To accomplish that initial goal, she said that the office needed staff members on hand to translate its correspondence into Spanish instead of waiting for the district’s communication office to do that. Because of the additional bilingual staffing, the office is now able to update all of its communications as necessary, Evans-Flaherty noted. Even when mass phone messages go out to parents, they are made in Spanish.

"We’re able to do all that in house," she said. "We’ve never been able to do that out of this office before."

"She communicates with principals and (helps) mediate special education conflicts," she said. "Because she comes from the schools, it’s another layer of knowledge. … She has been valuable to this office."

The best kind of feedback has come from other parents turning to the office for help, because those parents have told other parents of the assistance they received, Flatherty-Evans said.

"That’s how I know we’re doing a good job," she said. "Parents know you come here and you are going to be served."

In addition to boosting its staff, the office has rolled out a new "ParentCONNECT" online system to improve the lines of communication between schools and parents and provide up-to-date information on students. A DVD also has been created to provide information on college readiness, and staff members are revamping the Parent University program to offer new workshops next year. Her staff also does outreach at the county’s social-services department, which is located across the street on St. Paul Boulevard.

Evans-Flaherty said that she is interested in the results of a monthlong districtwide survey conducted in April to find areas where her office would be able to provide professional development or provide more information to parents on such topics as academic placement.

"I’d like to know how each school is doing … and if they need help engaging our parents," she said.

The office also organized a parent conference held earlier this month focused on promoting the family-school partnerships as the foundation for student success. The conference included two workshops in Spanish and provided parents with a booklet on how to help their children succeed, Evans-Flaherty said.

Her work also has included providing input on the district’s parent-involvement policy, which is under review by the board of education.

Developing Latino parent involvement also has become an area of focus for the Bilingual Council, Ramos noted. The council meets monthly, and Ramos said that she feels attendance should be mandatory.

Hispanic parents are traditionally more timid, however, about approaching teachers and administrators because "what the teacher says, goes" in many of their native countries, Encarnación explained.

"But we have seen changes," she added. "We have seen parents getting more aggressive to advocate for their kids."

To get more parents advocating for their children will be Ramos’ mantra when she takes charge of the Bilingual Council, she said.

"They have rights as parents, as Hispanics," she said. "My goal will be to teach them on what are the rights of a Latino in this country."

Parents have to understand that if they do not make their voices heard, nothing will change for their children, she added.

"Parents come to (the council) to complain," Ramos explained. "But when it’s time to step up and do something, they don’t come."