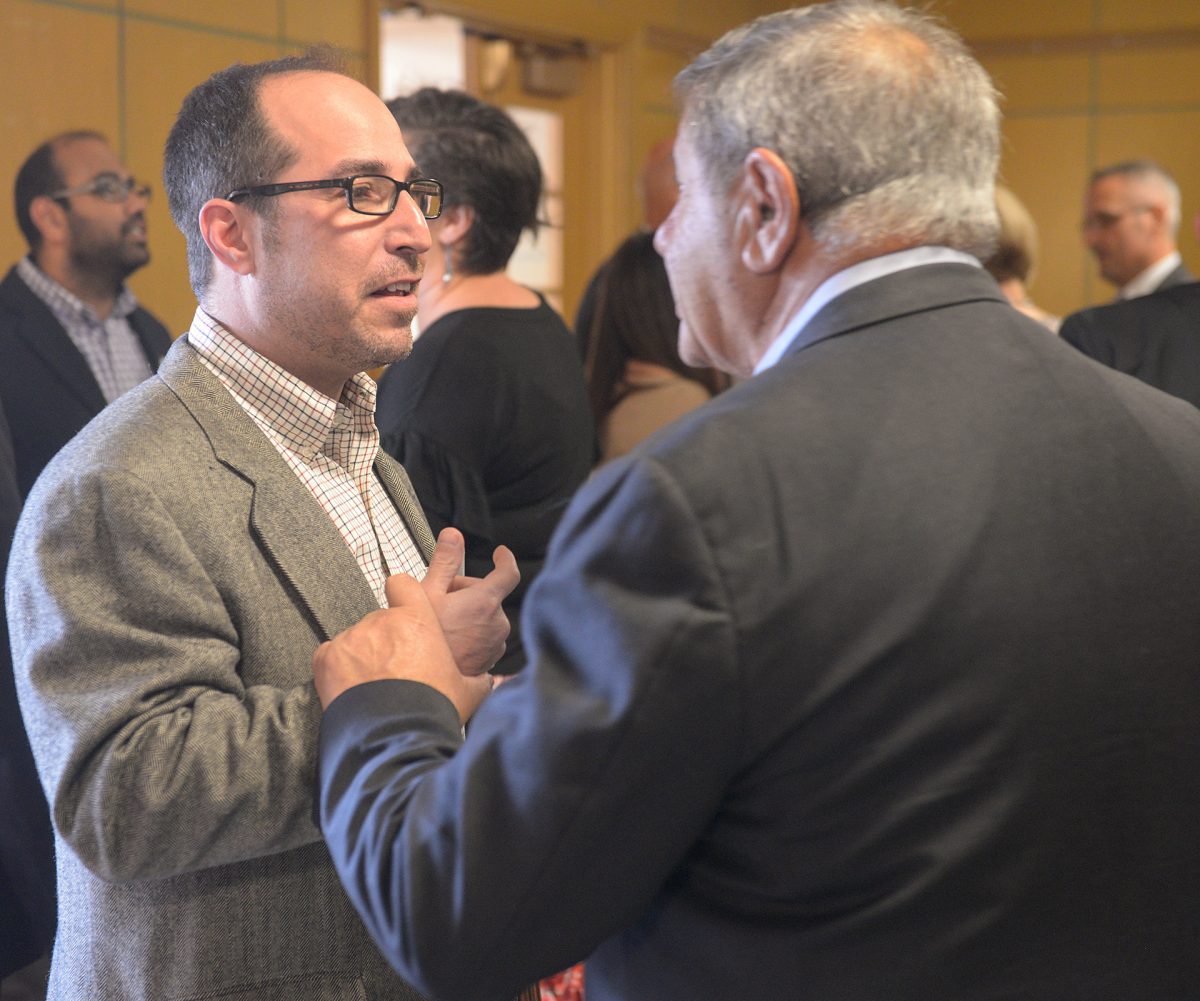 Ken Glazer talks with people before the start of the Family Business Program held at St. John Fisher College on Oct. 18. (Courier Photo by John Haeger)

To help him prepare for that eventual step, the senior at St. John Fisher College is taking a course this semester that is part of a new Family Business Program at the School of Business.

Vieira’s parents own and operate a local franchise of Dunkin’ Donuts shops.

“I’ve always been interested in the family business,” he said, adding that he has been working at his parents’ shops since age 14.

He said eight other students in the course are connected to family-owned or parent-owned businesses.

“It (the course) gives you perspective on how to be in a position to take over the business when your parents are ready,” Vieira explained. “If you don’t know what to expect, you can be caught off guard and you won’t run it (the business) smoothly through the transition period.”

Helping families through such transitions was identified as a priority when the college decided to develop its Family Business Program, which debuted this fall, explained the School of Business’ Dean Rama Yelker. The program was designed to not only enhance the school’s curriculum but to offer support for local business owners as well, she said.

Formerly the dean of the College of Business & Management at Saginaw Valley State University in Michigan, Yelker said she wanted to replicate the program she oversaw at Saginaw soon after arriving at St. John Fisher three years ago.

The business school staff began its development of the local program by conducting a survey to gauge what small family businesses are located in the Finger Lakes region and what their needs are, she said. The survey was sent to several hundred firms following outreach to local business chambers, residents and other family business owners, and more than 100 surveys were returned, she explained. Most of the respondents were single-family-owned business operators for companies with 50 or fewer employees.

“We might have touched on something that is much needed in a community like ours,” Yelker said. “The backbone of a community is the small- and medium-sized companies supported by family-owned businesses. We hope Fisher and the business school can be a resource for those businesses.”

Using the survey responses, she and her staff created a program that will include workshops, webinars and a spring conference to provide support for the priorities identified by respondents. The areas of focus for this inaugural year will be managing planned and unplanned transitions, business governance and training for the next generation, she said. Next summer, the program will offer a session for high-school students who come from family businesses.

Most business owners who replied to the survey said they did not have a succession or transition plan, Yelker said. Information for such planning was the theme for the community program’s launch on Oct. 18. Keynote speaker Ken Glazer, chairman of Buckingham Development, faced a worst-case scenario when he lost both of his parents during a plane accident five years ago, Yelker said.

An emergency plan had been in place but not a formal transition plan for the real-estate development company, she said. Glazer told the Oct. 18 audience of business owners, alumni, parents and students that a formal plan would have been a big help during such a traumatic event, Yelker said.

“If you have a plan and spell it out, you preserve your family. … There’s no infighting or sibling rivalry if you as the previous generation (take) the responsibility to spell out the transition,” she added.

One thing to avoid when discussing transition plans is asking a family member to take over the business during dinner and expecting an answer by breakfast, which is a real-life example from a father and daughter, Yelker said. A process for decisions about the business also is necessary, whether that’s a formal board of directors for larger companies or a regularly scheduled family meeting for smaller ventures, she said.

Communication is key to success for a company no matter its size, Yelker noted.

Helping families have those conversations will be one of the roles of peer groups, which are still in the planning phase, Yelker noted. The groups will allow for the business owners and their family members to meet with others in similar situations and learn from each other through facilitation from experts in the field, she said.

Vieira said he has talked to his parents about his interest in running the family business, and they have mutually agreed that he will work elsewhere for a few years first and possibly begin graduate school at some point.

“All I’ve ever known work wise is Dunkin’ Donuts,” he said. “I’m excited to work for someone else too.”