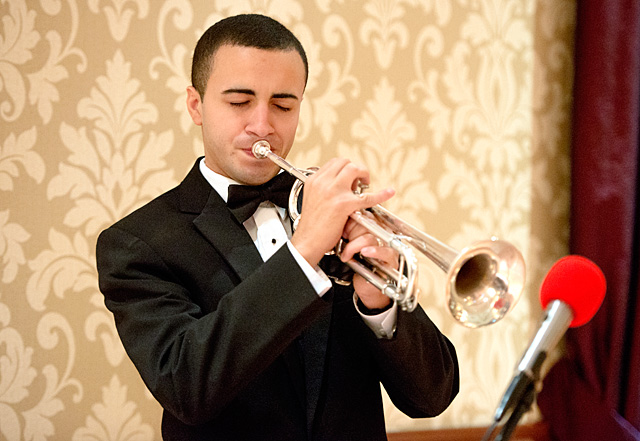 ROCHESTER — Encouraging Latino youths to become the leaders of tomorrow is one part of building a stronger city.

And with a city that struggles with high poverty rates and low high-school graduation rates, more students need to take on that journey to higher education, added Hilda Rosario Escher during the 20th-annual Hispanic Scholarship & Recognition Awards gala held July 11 at the Rochester Riverside Convention Center.

So, she also asked the 630 people in attendance to do whatever they can to help more students, whether that means serving as mentors or potential employers.

"I ask that we continue the work together … and be the key to future success for many more students and the great city of Rochester," she noted.

The success of New York state also depends on supporting organizations like Ibero that are serving on the front lines in their communities and opening doors to better lives for area families, said Thomas DiNapoli, the state comptroller, who served as keynote speaker.

Carmen Yulín Cruz, the mayor of San Juan, Puerto Rico, had to bow out as the gala’s keynote speaker because of the island’s debt crisis.

DiNapoli also urged the students in attendance to go on and earn bachelor’s degrees. While not a guarantee of success, research shows that people with such degrees experience lower rates of unemployment and over a lifetime earn more than $1 million more than a person without a degree, DiNapoli added.

"It’s the equivalent of scratching off your personal ‘Win for Life’ ticket," he remarked. "You are on the right path."

The 61 college scholarship recipients who were recognized during the July 11 event for their academic performance and community involvement represent Monroe, Livingston and Ontario counties. Twenty-two of the students are from the Rochester City School District, said Ibero officials.

Members of the committee that awards the scholarships modified the application a bit this year so that students had to include what colleges they had applied to, explained Grace Tillinghast, the scholarship committee chairwoman. The committee also considers such criteria as standardized testing scores, grade-point averages, extracurricular activities, letters of recommendation and a short essay about career goals.

Gabrielle Arieno, this year’s recipient of El Mensajero Católico’s scholarship, said that she is not quite sure of her career plans but she will study business at Bowling Green University in Ohio.

Arieno lives in Spencerport and graduated from Aquinas Institute last month, she said during an interview before the gala. She was unable to attend because of a prior commitment. But her grandmother, Carmen Gladys Negron O’Reilly, was on hand to accept in her place.

Arieno added that she was sad to miss the ceremony, as "it feels good that you’re being noticed from your culture."

Mayra Arieno, who also attended the gala with her older daughter the year before, said that the annual event is a great experience for Latino students to see other youths like them.

"I think it’s a great honor to highlight the Hispanic students in our area doing great things for the community," she added.