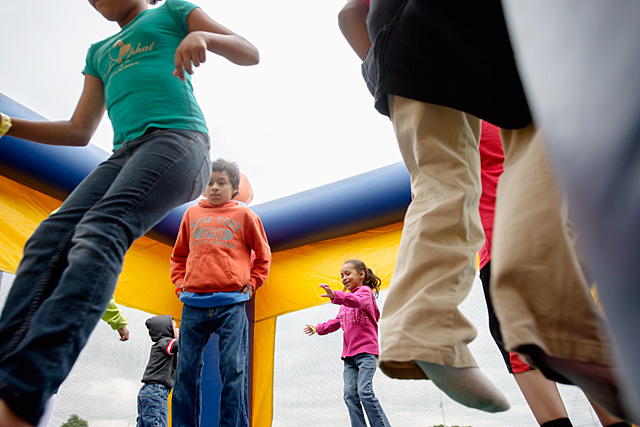 ROCHESTER — Angelica Infante did not mince words about the need to improve bilingual access for Latino students in the Rochester City School District.

Infante, the state’s assistant commissioner of bilingual education and foreign language studies, spoke June 14 during the second-annual Latino Family Fair, which was held outdoors this year on the grounds of the Rochester International Academy.

"I find the parents to be very clearly committed to their children," she said. "But I feel they need to know their rights a little better so they have a better understanding of what they’re entitled to."

After a daylong visit to four schools throughout the district for an overview of its bilingual programs, Infante said that she did not get a sense that Latino parents are being properly informed of those rights.

"I’m not leaving here feeling we are doing all we can do for families," she said. "I am underwhelmed by my visit."

With her role as an advocate, she said that Rochester will now be under a spotlight to ensure it improves its services for all families in need of bilingual services.

A former teacher and director of the Dual Language Project in New York City, Infante was appointed as assistant commissioner last fall after having served as executive director for New York City’s Office of English Language Learners (ELL) for its board of education, according to information at www.regents.nysed.gov.

Twelve-year-old Shaingely Montero, left, dances with other members of the Eartquake Shakers Step Team from Performance School No. 9 during the Rochester City School District Latino Family Fair June 14 at the Rochester International Academy.

Recently, her office announced a blueprint for the success of ELL students that begins with the premise that all teachers are ELL instructors, according to bit.ly/1nMUrAF.

In Infante’s address to parents during the fair, she said that the state will focus on Rochester to ensure families are better educated about their legal rights.

"We will be present," she said. "I want the parents to know that they have someone advocating for them at the state level."

More than 150 families had signed up for the fair, said Maria Encarnación from the district’s Office of Parent Engagement, which sponsored the event along with the city’s recreation department and New York State Association of Bilingual Education. The association invited Infante to speak at the fair, officials said.

The fair also featured such activities as games and bounce houses for children and tables of local organizations with information for parents, as well as performances from Dr. Martin Luther King Jr. School No. 9’s Earthquake Shakers step team, Conjunto Salsa 9 and Borinquen Dance Theatre Club and School, John James Audobon’s School No. 33’s James Kates, and the Youth Chorus.

Seven-year-old Sesly Williams eats cotton candy during the Rochester City School District Latino Family Fair at Rochester International Academy June 14. A variety of carnival-themed foods were given out at the fair.

"Parents are getting more involved (in their children’s educations), and that’s our goal," Encarnación said.

But the district must continue to enlist more parents to be part of the decision-making process and encourage them to join school-based planning teams, she added.

Liz Pacheco, a grandmother and mother, said that the fair is a great help to Latino families. She brought along her nieces and young granddaughter to the event.

"The fair always has good information and resources for families," she said. "Sometimes, (Latino) families don’t know how to find resources and the things that they need."