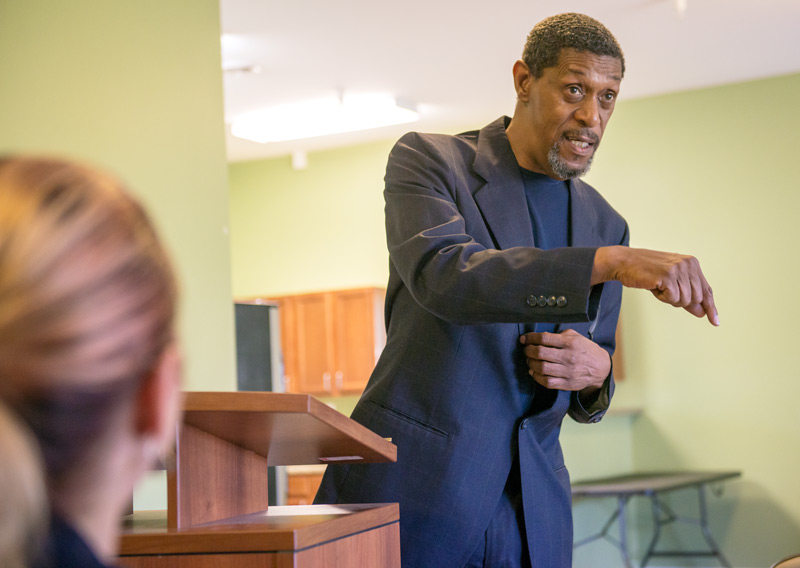 Howard Eagle talks about the history of racism in the school district since the mid 1800s to present during a community forum on Racism in the Rochester School District held at FIGHT Village on June 14. (EMC Photo by John Haeger)

Recommendations in the coalition’s plan include:

• Increase opportunities for African-American students in third to fifth grades to be taught by teachers who look like them.

• Improve communication between central administration and community groups like the coalition to increase collaboration in hiring, curriculum and professional development.

“Race and racism is the elephant in the room” when it comes to the education of children in the city school district, noted Howard Eagle, who is part of the coalition. “We look at the end results and say, ‘What’s wrong with these children?’ That’s the wrong question. The right question is, ‘What happened to them?’ … Something happened to them.”

He said his comments were based in historical knowledge that black people risked their lives in the 1800s and 1900s to obtain an education. In Rochester, the school board segregated the education of black children for a period beginning in the 1840s, Eagle noted, so that form of blatant racism was not specific to southern states.

In the present, in cities all across the United States, 80 percent of white teachers do not live or send their children to the schools in which they teach, he said.

“I don’t believe we are so unintelligent to think this is a coincidence,” he said. “There are different people in different eras, but the same discrimination still (persists).”

School board member Natalie Sheppard agreed that awareness of the scope of racism is a good first step to begin addressing racial issues. But she added that she attended the June 14 meeting as a community leader but not to speak on behalf of the board.

“Racism exists,” she said. “It is up to me as one of the leaders of this district to make sure that I don’t allow it to happen as I see it exists.”

She encouraged community members to come forward when they are confronted with situations involving any form of racism and hold the board accountable for policies that are in place, such as hiring policies intended to improve diversification of its staff.

The board has hired a director of African-American studies as well to begin to improve its curriculum, Sheppard noted.

Sheppard agreed that recruitment and professional development were areas in need of improvement, which could address the concerns of the coalition. The district should improve its marketing strategy to attract highly qualified, diverse candidates, and they should recruit at historically black colleges, she noted. The district’s administration has taken some steps and has held recruitment fairs in Texas and Puerto Rico to better meet the needs of Latino students.

Much work lies ahead, though, Sheppard said, as recruitment efforts over the last two school years resulted in recent hires who were 80 percent white and 20 percent “diverse.”

Gladys Pedraza-Burgos from Ibero-American Action League said having the kinds of statistics Sheppard offered during the forum was key to improving transparency for the district. Those numbers should be shared with the community every year as part of improving collaboration, she said.

“A lot of us know a lot of people in a lot of different places, so we can help diversify that (teaching pool),” she said. “I do think those numbers need to broken down so we can mirror what the population is.”

The district also should be working with area colleges, which act as feeder systems for the district’s teaching hires, Pedraza-Burgos added.

“Having gone to college, there is not enough in the college curriculum … around learning about other kids, other cultures and how to address your own biases that you walk in (to a classroom) with,” she added. “We can’t do this in isolation.”