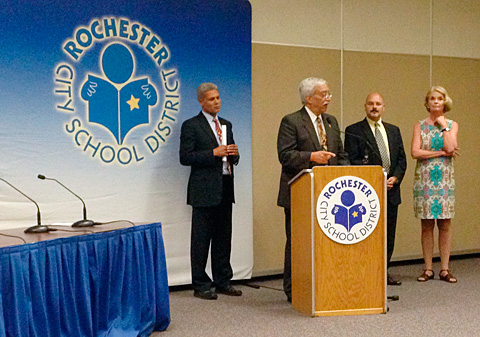 "For the district to turn things around, it will require a strong commitment and talented leaders," he said. "Each one of them has proven to be so."

Ray Giarmartino, a former city schools teacher, assistant principal, principal and administrator for several area school districts will take on the role of chief of school transformation. Currently, he is superintendent of the East Rochester School District. He will work on reversing the trends at the district’s priority schools, which have been identified as performing in the lowest 5 percent of schools statewide.

Suzanne Johnston, a former longtime principal of Wilson Magnet High School and now president of Our Lady of Mercy High School, will return to Wilson to supervise its new principal, Uma Mehta, and return the school to its former status as a top-performing school. The school is now known as Wilson Commencement Academy.

Ralph Spezio will return as "turnaround executive principal" of Enrico Fermi School No. 17, where he previously worked 12 years as principal. School No. 17 also has been identified as a priority school.

In addition to the challenges at priority schools, the district’s graduation rate also dropped to 43.4 percent from 45.5 percent, according to information released by the New York State Education Department at www.p12.nysed.gov/irs/pressRelease/20130617/District-enroll-outcomes-and-diplomas-June172013.pdf.

Helping city schools aligns with the mission of the Sisters of Mercy, especially with its focus on social justice, explained Johnston, who will remain Our Lady of Mercy High School’s president.

"I believe that the number one civil rights issue is quality of education," Johnston noted. "They (Sisters of Mercy) are clearly invested in this work.