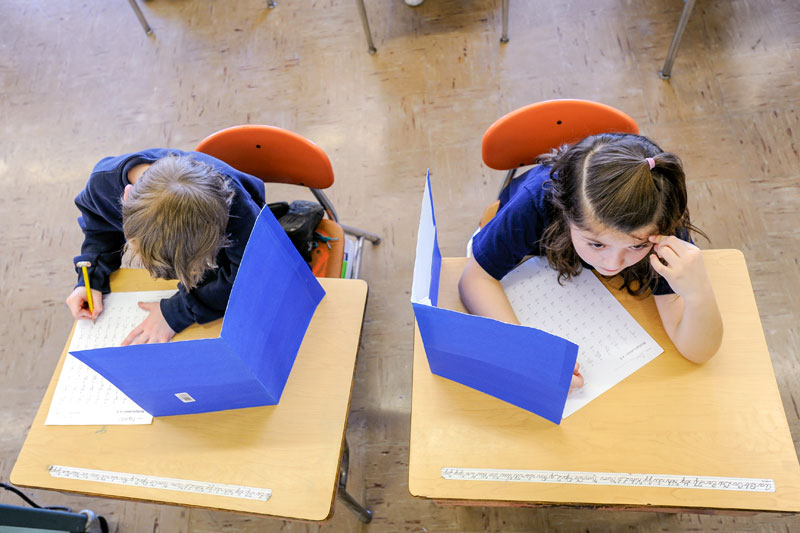 Using standardized testing as a measure of student achievement is failing students and has resulted in inflated scores due to coaching, outright cheating and reallocation of resources to subjects that are being tested, a national educational expert asserted.

Standardized testing’s impact on the U.S. education system, its teachers and students was the focus of a Sept. 27 discussion at Temple B’rith Kodesh in Brighton. It was led by Daniel Koretz, the Henry Lee Shattuck professor of education at Harvard University’s Graduate School of Education and author of The Testing Charade: Pretending to Make Schools Better.

Dan Drmacich, coordinator for the Rochester Coalition for Public Education, said the Sept. 27 forum was the first in a series of meetings being held throughout the community this fall to get input from educators and community members about testing and to develop proposals that can be presented to state education officials.

Rising scores have led educators and government officials across the country to cling to a pretense that standardized testing works to measure achievement, but the officials are wrong, Koretz said. He argued that rising scores misrepresent student achievement because they are based on coaching, corruption and focusing resources on subjects being tested at the expense of other subjects. Koretz said corruption is able to occur due to poor monitoring of testing administration in the 13,000 school districts across the country.

Some districts go so far as to provide teachers with materials that focus on incidental details of a test or the test format so that teachers can “coach” students on how to find the right answers and raise their scores, Koretz noted.

“This is what I mean by corruption of teaching,” he said. “Cheating is not just changing answer sheets.”

Teaching to the test is encouraged among young teachers and is considered good instruction, Koretz said he has learned from graduate students taking his classes at Harvard.

Some schools go so far as dropping such enrichment programs as music or arts to focus on test preparation, he said.

Teachers generally do not trust exams that require memorization, Urbanski added. Being forced to focus lesson plans on preparing students for assessments also robs students of instructional time on material they can use later in school or in real life, Urbanski and Koretz said.

“Teachers are not given the opportunity to assess the knowledge they need to assess,” Urbanski said. “Tests and assessments should be information, not verdicts … on students, teachers, schools or districts.”

Henry Padrón, a retired Rochester City School District kindergarten teacher, noted that before Common Core Standards were adopted by New York in 2010, he used to ask his students what they wanted to learn about and create lesson plans based on their interests.

“They would have a responsibility to show in different ways what they had learned,” he said.

A test was only one option he could choose for students to demonstrate their knowledge, he added. To celebrate his students’ success, he would plan a culminating activity and invite parents and families to participate, Padrón said.

But in recent years, Padrón said he had to do so much to prepare his young students for state assessments that they no longer had the option to take naps during the school day, let alone have creative play time.

“A lot of learning happens in play time,” he said.

Local parents also have expressed concerns about how their children are affected by the stress of preparing to take standardized tests. Koretz noted, for example, that testing instructions given to teachers and administrators in at least one state gave explicit directions on what to do if a child vomited during testing.

Victoria Robertson said she became concerned when her third-grader said she was bored in school because her class had to do so many practice exams. After speaking with other parents whose children were scared about taking standardized tests, Robertson decided four years ago to opt out of state assessments for her two children, who at the time were in elementary and middle-school grades in the Rochester district.

“I was not going to participate in something that is hurting education” as well as teachers and students, she said. “It’s so important that we have reasonable standards … and (not) tests that show them as failures.”

Tests provide a snapshot of a child’s abilities in that moment, and therefore should not serve as a basis for developing curriculum, according to members of the Rochester Coalition for Public Education, which includes parents, retired teachers and local legislators. The coalition is calling for a moratorium on statewide testing.

Beatriz LeBron, a member of the Rochester City School District Board of Education, said the board has met with members of the coalition to discuss standardized testing. However, she added that the board does not have any legal standing to create policies that contradict state education laws.

“We can, however, advocate and encourage others to take their advocacy to Albany,” LeBron said. “We can and should help parents understand what rights they have around testing.”