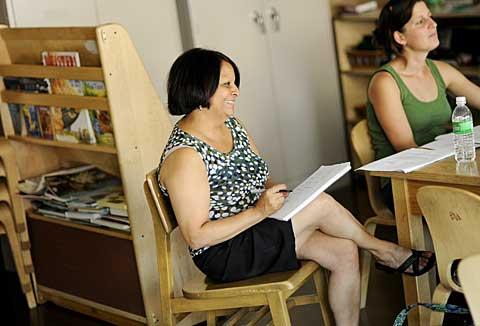 And that includes this year, where she was spotted ordering some lunch from one of the Latino restaurant vendors. But it’s not just the food: Cruz-Vázquez credits the festival with providing just the right networking opportunity for her to find a job as a teacher when she first moved to the area in 1994. She recently was appointed principal of the Montessori School located in the Benjamin Franklin High School building.

"I walked around and I just said, ‘Hi,’ and introduced myself and asked, ‘How does one get a job as a teacher?’" Cruz-Vázquez chuckled as she recounted the festival story during an interview July 13 in her new office. "And it was funny because I did get a phone call the next day and somebody guided me through the (application) process."

Having certification as a bilingual teacher, Cruz-Vázquez was hired to teach first and second grades in the dual-language program at James P.B. Duffy School No. 12 where she worked for the next decade. She subsequently became an English language arts specialist, which helped hone her leadership skills.

Vicki Gouveia, who was the school’s principal at the time, was the one who called Cruz-Vázquez after getting her name from the wife of a school board member who had met her at the festival.

"She was and continues to be one of the most phenomenal people in the district," remarked Gouveia, who also is president of the Association of Supervisors and Administrators of Rochester. "She was so competent and so strong in her classroom and how she interacted with students and with parents. I still run into parents today with children now into their 20s and who had Miriam in first grade and talk about her."

Cruz-Vázquez was born in New York City to Puerto Rican parents and knew at a young age that she was destined to be a teacher.

"I could tell you that I told my sixth-grade teacher, who was a great inspiration to me, that I wanted to be a teacher in sixth grade," she said. "And really, I tutored in junior high and high school. So, I was already looking at how to help others, how to teach others. And I was fascinated in how learning happens."

"As a little girl, walking in New York City … one of the buildings that fascinated me was Columbia University," Cruz-Vázquez added. "And to be a child and think that you could possibly go there … that was a dream come true."

She began teaching right after obtaining her bachelor’s degree and worked with autistic children, as Cruz-Vázquez had minored in special education.

"That was a big focus (for me), looking at developmental skills with special education in children but also looking at children who had another language; in this case, it was Spanish," she noted.

After studying at Columbia, Cruz-Vázquez, and her husband of 22 years, Mauricio Vázquez, moved to Belgium. He was in the U.S. Air Force and she worked as a civilian education specialist on a NATO base and trained teachers from 16 different countries.

"I also had the opportunity to visit different schools," she added. "Actually, some of the schools I went to visit had Montessori backgrounds. … (I’ve come) full circle."

Following three years in Europe and time spent living in Colorado, Cruz-Vázquez said that she and her husband wanted to move closer to their families. Her mother, Maria Cruz, and siblings had moved to the Buffalo area, so when she got the job at School No. 12, the couple settled in Rochester, she said.

The dual-language program at the school was different than her experience teaching bilingual students because non-Hispanic students and Latino students have instruction in English and Spanish, she noted.

"So now you’re looking at an appreciation for language and also a desire to maintain a language," Cruz-Vázquez remarked. "The interexchange of culture was beautiful, absolutely beautiful. And the teachers and the collaboration was phenomenal."

Graciela Perez became principal during Cruz-Vázquez’s final couple of years at School No. 12. She also was impressed by Cruz-Vázquez’s connection to her students and their parents as well as the respect she had earned from her colleagues, Perez added.

"I thought she needed to move forward and spread herself a little bit," Perez said. "When you’re in classroom, it’s a wonderful thing. But she had the talent to lead."

Perez, who has subsequently retired, took Cruz-Vázquez under her wing and encouraged her to seek out an administrative position.

"She fought me all the way," noted Perez, who served as a mentor for Cruz-Vázquez for a year. "But I pushed her out of the nest."

In addition to having natural leadership skills, Cruz-Vázquez always extended herself above and beyond what was asked of her, and Perez said that she is proud of all that she has gone on to accomplish.

"She’s strong," Perez said. "And even though she’s a small package, the minute you talk to her… don’t let that packaging fool you. She packs a powerful punch."

After Perez took her under her wing, Cruz-Vázquez made the jump to administration six years ago when she became vice principal at Roberto Clemente School No. 8. Since it was the school named after a Puerto Rican national hero, it was an especially proud moment for Cruz-Vázquez and her family.

"My mother is my greatest supporter," Cruz-Vázquez added, noting that the assignment "brought tears to her (mother’s) eyes, and I think it was in part because I had challenged myself to be even more than a teacher. … This is (like being) a master teacher, I would say. But the name of the school to be my first one (principal assignment) to her was the greatest thing that ever happened."

And since then, Cruz-Vázquez said that she has seen that being an administrator allows her to have a bigger impact while also keeping her close to the teaching profession that she loves.

"You not only have a classroom of 20 students but I have 600," she added. "Teachers come talk to you about the profession and how best to meet the children’s needs. You come to a point where you’ve never really left the classroom. You’re really impacting it even more."

She said that she’s excited about her new job and has already met students, parents and administrators, as she was assigned to the school in June. She will oversee a student body of more than 200.

At some point in the future, Cruz-Vázquez said that she may finish the doctoral degree work she has started, but no matter what, her work will always involve teaching children.

"I don’t see myself anywhere away from the profession," she said. "It just calls me."