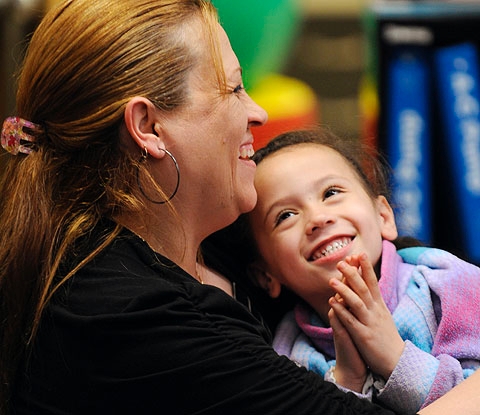 ROCHESTER — Yahaira Cisneros knew nothing about the education system in Rochester when she arrived from the Dominican Republic nearly a year ago.

But when she received a letter from staff at her daughter’s school, Martin Luther King Jr. School No. 9, about a new program to inform and guide parents on how to be actively engaged in their children’s education, Cisneros said that she signed up immediately.

Having an involved parent "motivates the students," she added.

Cisneros was one nine parents at School No. 9 who enrolled in the "Padres Comprometidos" curriculum, which was created by the National Council of La Raza (NCLR) and seeks to help Latino parents overcome cultural barriers so they can successfully advocate for their children and boost student achievement.

The Rochester City School District invested $15,000 to provide a "train-the-trainer" workshop upon a request from Ibero-American Action League. The curriculum is aimed at Latino families who are often uncomfortable with questioning school decisions and requesting help for their children because of cultural norms from their native countries, district officials have said.

Now, the district is looking to expand parent engagement to include civic issues through participation in another leadership initiative for interested parents, said Willie Robinson, director of the office of parent engagement.

The Greater Rochester Parent Leadership Training Institute (PLTI) — a partnership between Rochester and the Brighton, Irondequoit, Chili and Irondequoit school districts — will start up this fall, Robinson added.

The goal is to bring together a diverse group representing parents in all of the five districts, he noted.

"You get a whole mix of people in a room talking and networking that don’t normally talk to each other," added Carolyn Lee-Davis, the PLTI coordinator for Rochester.

The Rochester Area Community Foundation brought the model to the attention of the school districts because of its success in other areas in improving quality of life for other cities, Robinson said.

"How can we make a difference in the community?" Robinson explained is the central question the group of 20 to 25 parents will answer as part of the training.

During the 20-week program, the parents will learn strategies to approach political leaders and create change in their own neighborhoods, Robinson said. The sessions will take place at the Downtown United Presbyterian Church with meals and childcare included, he added. Half of the sessions will focus on leadership and networking, and the other half on issues related to diversity, public policy, media outreach, budgets and legislation.

"We’re trying to provide as many opportunities for parents to help them grow," Robinson remarked.

Rochester will be the only community outside Long Island to offer this opportunity to parents since the model was created 20 years ago, noted Lee-Davis. A Spanish-language model is currently being piloted and the organizers hope to offer that as an option in the future, she added.

The district also hopes to expand the "Padres Comprometidos" curriculum and offer it at more elementary schools and community locations, explained Gladys Pedraza-Burgos, the district’s chief of youth development and family services.

The La Raza program is available for parents of children in three age groups: preschool, elementary school and secondary school, explained Rose Mary Villarrubia, a home parent assistant who was one of two facilitators at School No. 9, during a graduation ceremony for the parents who completed the eight-week sessions. Parents of secondary school students, who have been meeting at district offices on St. Paul Street, were expected to finish up sessions in June. Another group was expected to start classes at Ibero this summer.

"This program has been really transformational for them," she remarked of the School No. 9 group. "They know things they didn’t know before. And they have felt empowered. … They’re able to ask questions and frame questions correctly to get answers."

"These parents were wiling to stand up and speak up" during that meeting, added Rosario Escher, who pushed for the district to offer the La Raza program.

Diana Rivera, who moved from Puerto Rico to Rochester six years ago with her two daughters, ages 11 and 4, was one of those parents.

"I love this program," she remarked.

She learned valuable information, Rivera added, including how the district is funded, how to help her daughters with their homework and how to advocate for them with administrators.

"With the information I gained, I can help create a better future for my children," she said.