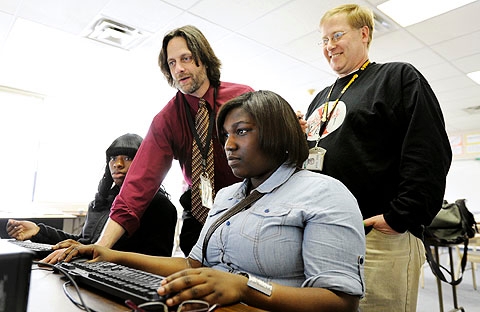 ROCHESTER — In spite of protests from community members, the Rochester City School District’s board of education adopted a revised plan for a new alternative high school.

During a special meeting on March 29, the board voted 6-1 to adopt the plan, which is aimed at providing intensive support for students who are nearing graduation but are low on credits and who are currently enrolled in schools that are being phased out this year.

Several speakers at the meeting said that the board rushed through the review process, did not obtain enough parent involvement and should have waited to adopt such a proposal until a new superintendent is selected. The alternative high school was proposed in February by interim Superintendent Bolgen Vargas, who was named April 10 as two finalists for the superintendent position.

"We are taught that respect means treating people the way you want to be treated," said Lori Thomas, an elementary school teacher. "It would be best for all involved if you (board members) just show us the respect we deserve." Putting forth a proposal without any parent input — as was done with the alternative proposal — is not showing respect, she said.

"If we all work together … the children benefit from true collaboration and respect and our children will learn from their adult role models," Thomas added.

The board and district administration did consider the ideas and concerns of community members and parents during a March 5 brainstorming session of the Excellence in Student Achievement committee, explained board member Van Henri White.

In response to comments made at the March 5 meeting, the proposal was amended to place the affected students in one building — John Marshall High School — instead of two, White said. The district also is working with students and parents to choose the teachers who will work with this population. And school officials will review students in the district’s other high schools who are "disengaged and under credit" and may benefit from the alternative-school option, White noted.

But, he said, the board could no longer wait to act.

"We could not ignore the fact that these students are failing because we failed them," White remarked.

The alternative school will be offered to students currently attending phase-out schools housed in five high-school buildings: Benjamin Franklin, Thomas Jefferson, James Marshall, Edison Tech and Dr. Freddie Thomas. Thomas will become a kindergarten through eighth-grade building while other phase-out schools, such as Global Media Arts High School at Franklin, were selected for closure because of persistently low performance and low demand by families, according to district officials. The phase-out programs also have some of the highest drop-out rates in the district, White added. These schools are being reduced by one grade each per year beginning with the lowest grade possible, according to information at www.rcsdk12.org/1973105209118780/blank/browse.asp?a=383&BMDRN=2000&BCOB=0&c=57283.

The kind of aggressive intervention that will be offered through the alternative high school plan was necessary to meet the critical needs of more than 1,000 students currently attending the phase-out schools who are on the verge of "aging out" of the system at 21, Vargas explained during an interview March 8. For example, some students have reached the age of 19 while earning only 5 1/2 of the 22 credits needed to graduate, he said.

"Our first challenge is how to help the kids," Vargas said. "Because if we don’t intervene, these kids won’t graduate."

The district currently offers three alternative programs for smaller populations of students: the Young Mothers’ program; the "I’m Ready" program for students in long-term suspension; and the Water Tower Academy, which is run by the Youth and Justice department.

Marqueeta Nixon and Tiera Alston said they are on track to graduate thanks to Water Town Academy, which is on Hart Street.

"In my old high school, I had a lot of distractions and it was hard for me to stay focused," said Marqueeta, a junior. "This is a good program, and there needs to be more of them."

The academy was created in collaboration with St. Joseph’s Villa about eight years ago to serve students coming back into the district from other programs, explained Margaret Porter, the program director. The district took over operation of the academy about a year ago, and Water Tower currently serves 17 students who need additional support and wraparound services for children and their families, she added.

"We support the student academically and through a social worker, and … develop relationships with students and families," Porter noted.

Tiera said she had experienced difficulty learning in large groups and was about to drop out of school until she learned about Water Tower Academy. Now, she’s on track to graduate in August. She said other city students on the verge of dropping out would benefit from the kind of one-on-one mentoring she currently receives.

Vargas commended the work being done at Water Tower Academy, but noted that it does not have the capacity to accommodate the great number of at-risk students in the district. Porter noted that the Water Tower model has proven successful, enabling students to move up in grade level and graduate, and also has reduced the number of long-term suspension incidents. Given that the district’s alternative school plan includes concepts that are similar to those on which Water Tower operates, she said that she expects the newly adopted proposal to achieve similar success.