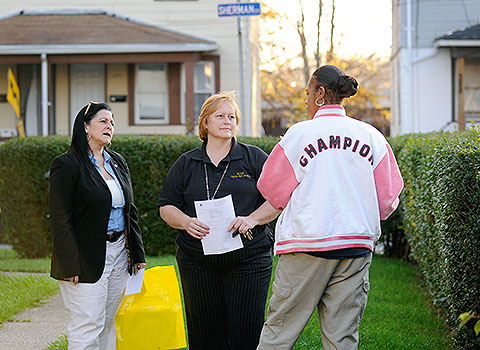 ROCHESTER — Cheree Young was headed out of her Fulton Street house Oct. 26 to drive her daughter and young nephew to school when staff from Rochester City School District stopped her to speak with about her son.

Kevin Henry, 17, has been absent from school more than 10 days, which came as news to his mother.

Young’s residence was one of several visited by Lori Baldwin, the district’s director of safety and security, Deputy Superintendent Anita Murphy and Carlos Carballada, the city’s neighborhood and business development commissioner, during the "Be Here, Learn More" attendance drive on Oct. 26.

The personal visits by teams of staff, community members and volunteers began last year to help reverse the poor attendance records of thousands of students throughout the district, said Superintendent Bolgen Vargas. Nearly 1,000 students have missed a significant number of school days this fall, he said. The district’s total population is about 32,000 students, according to www.rcsdk12.org.

"There is no better place for our children than our schools," Vargas said. "We need help from the community and parents."

Five groups with similar combinations of staff and community members attempted to visit 119 students with the worst attendance rates during the Oct. 26 drive, which officials said would be the first in a series. The groups made contact with more than 50 families, said Linda Dunsmoor, the district’s spokeswoman.

The visit was appreciated, Young said. She knew her son has not been making the best choices this year school because he was recently arrested for loitering downtown, she added.

The district’s efforts to get students back in school where they belong may help them get back on the right track, Young noted.

"That’s perfect," she said, adding that she planned to follow up with contacts that the group provided to her.

The groups that visited homes provided packets of information with lists of resources in the district and the community. All information was in English and Spanish.

"We are very fortunate as a community to have the capacity to help these students," Vargas noted.

The initiative also is expanding its outreach to families of elementary-age students as well as high-school students, Vargas noted. Visits were made to students from Lincoln School No. 22, Enrico Fermi School No. 17 and General Elwell S. Otis School No. 30, Dunsmoor said.

"We’ve learned from the data that we were not treating elementary absences as truant because you don’t think of a 7-year-old as truant," Vargas said. "But if a child develops this attitude at an early age, he grows up believing that it’s OK to miss school."

Absences at the elementary level have a negative impact a child’s ability to read, explained Jennifer Leonard, executive director of The Community Foundation.

"And if they can’t read by the time they are in third grade, they can’t read to learn for the rest of their school (career)," added Leonard, who serves on the superintent’s committee on chronic absences. "So our focus on the early grades has a double purpose."

The initiative also showed a range of reasons for why children were not showing up to school, from transportation problems to mental-health issues to waiting for a transfer to another school, said Vicky Ramos, who oversees the district’s student equity and placement program. Some students had simply moved, she added.

"We want to help find those students who are still here and find (them) help," Ramos said.

Transportation has been an issue, Sharon Brand explained to the group who came to talk to her about her son, Tyquan Scott. He has taken the bus from her sister’s home because the bus ride from their home near Otis Street to East High School was taking too long, Brand said.

And when he came home, he would tell her that he had made new friends, Brand added. But lately, her son complained about other students giving him a hard time for living on the west side of the city, she said.

She would like a transfer to one of the district’s charter schools that the family visited and that Tyquan is excited about, Brand said.

While she didn’t know about Tyquan’s absences, Brand said would follow up to have Tyquan transferred so he feel more comfortable in school.

"They (district officials) are starting to show an expression of caring," she said.

Parents like Brand demonstrated how much these families care about helping their children succeed, noted Carballada.

"There’s not a mother … who doesn’t want their children to be better off than they are," he added. "We have the services to help. And with programs like this, we can begin to address (issues) and make sure families have the support they need."