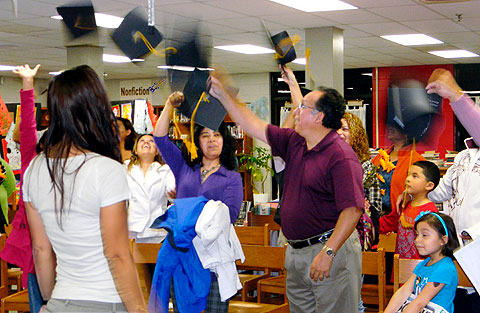 A group of parents trained by Conexion Americas, an National Council of La Raza affiliate that provides support to Latino immigrants in Nashville, Tennessee, celebrate during their Nov. 2011 graduation.

ROCHESTER — When Hilda Rosario Escher heard about the parent engagement program offered by the National Council of La Raza during the organization’s annual conference last summer, she knew it could make a difference in Rochester.

"We talk about parent engagement," said Rosario Escher, president and chief executive officer of Ibero-American Action League, during a Dec. 7 interview. "But we don’t talk (specifically) about what is involved. How do we prepare our parents to be engaged in the educational process of their kids?"

And that is exactly what the curriculum developed by the National Council of La Raza (NCLR) does, she added. So when NCLR representatives told her the curriculum training sessions had concluded for the year, she did not take no for an answer, remarked Rosario Escher.

"I said, ‘You don’t understand, my community needs this,’" she said.

Upon her return to Rochester, she met with administrators in the Rochester City School District who agreed to fund the $15,000 three-day train-the-trainer workshop that was held last October and attended by administrators and staff from the district and Ibero.

"For some time, we’ve been talking about looking at a model very specific to Latino parents," said Gladys Pedraza-Burgos, chief of the district’s youth and family services division. "We (Latino students in the district) are 25 percent plus. We need to look at what’s going to be effective for our parents."

"One thing that is really good about this training is it will help parents to understand the school culture, especially when they’re new to this country and don’t know how to navigate the system," she added.

The local Latino population has expanded from families from Puerto Rico to a growing number of families from Colombia, the Dominican Republic and Mexico as well, noted Pedraza-Burgos.

She also added that parent involvement and community investment are seen as necessary components to improve the quality of education for students, which the NCLR program demonstrates with its proven track record of success.

The results of failing to overcome these cultural barriers are discussed in a Rice University report on the effects of Latino parent involvement on the education of their children (www.owlnet.rice.edu/~marschal/Home_files/Marschall%202006.pdf).

"Latino parents perceived their role as providing nurturing, teaching values, and instilling good behavior, whereas schools were expected to handle the actual learning," according to the report. "As a result of these differences, when Latino parents are asked to take on responsibilities they traditionally view as in the domain of the schools, they may be uncertain about what role they should assume or feel that they are encroaching upon the school’s territory."

Changing those cultural perceptions is part of the NCLR curriculum. The training program covers such topics as understanding your adolescent, modeling positive behaviors, school funding and college readiness, explained Peggy McLeod, a consultant with the council based in Washington D.C. Parents also receive homework assignments to meet with the principals of their children’s schools — using a set of questions they have developed during the eight two-hour bimonthly sessions that culminate with a graduation, she added. Classes are offered in English and Spanish, and parents will receive take-home materials as well, Encarnación added.

"The sense I get is parents feel really empowered," McLeod said about her site visits to Houston and Nashville. "And one of the unintended consequences has been a sense of community (developed) among them."

She explained that NCLR established a train-the-trainer model covering three age ranges because schools and community agencies have the most direct interaction with parents and are thus best suited to facilitate their training. McLeod observed the NCLR program in action in Houston and Nashville to evaluate its effectiveness and said that she has been impressed by the parent participation, she added.

The training promotes parents reading to their children, checking to see if they have done their homework, to staying informed on when college applications are due and reviewing financial aid information, McLeod said.

A recent international study showed that students who were read to by their parents — in the native language of the parents — did better across the board on exams that focused on math and science, she noted.

"Parents talking to their kids and having meaningful dialogue with their kids, reading to them, actively engaging with them … regardless of income, those kids did a lot better," McLeod added.

Rosario Escher said that the curriculum essentially provides a set of values to be lived by the district, the parents and the community.

"If you can make sure even just one kid is successful, you have done something," she remarked. "This really promotes the advocacy point … not only for their kids but for the school as a whole."

And while a building such as Dr. Martin Luther King Jr. School No. 9 is an exception to a general lack of active participation from Latino parents, school and Ibero officials hope opening the door to having more Latinos take on leadership roles will be one of the many positive results of the NCLR initiative, added Pedraza-Burgos.

"Remember what we’re trying to do is get away from these little pockets of success and create this continuum … with as many schools as possible," she noted. "Those leadership positions for (Latino) parents are real crucial for us."

EDITOR’S NOTE: Parent classes will begin this January at the district office and later this year at Ibero’s offices. A summer session also is in the works. To register or for more information about "Padres Comprometidos," contact Maria Encarnación at 585-262-8334 or Maria.Encarnacion@rcsdk12.org.