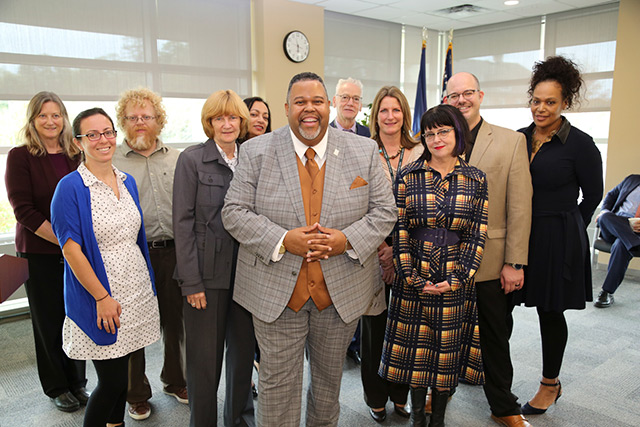 President of Rockland Community College, Dr. Baston, pictured center surrounded by the team who put together the Title V Developing Hispanic- Serving Institutions Program grant application. The grant from the U.S. Department of Education will support the development and implementation of RCCs five Academic Schools model to increase participation and improve retention among students. (Photo courtesy of Janice Goldstein)

Rockland Community College will use a $3 million grant to develop and implement a new national academic model so it can increase the participation and retention of Hispanic students.

The grant was awarded by the U.S. Department of Education and is part of the Title V Developing Hispanic-Serving Institutions Program. The grants assist schools whose total enrollment is at a minimum 25 percent Hispanic. RCC, which has a 31 percent Latino student population, is one of 40 institutions across the country and Puerto Rico to receive the grant.

RCC is part of a cohort of 10 New York state community colleges — including Monroe Community College — that design and work to implement the academic model called “guided pathways,” which is a structured academic career path for students.

The data that supports the success of this model has been collected over the past two decades by the Community College Research Center at Columbia University. As of 2017, more than 250 colleges across the nation have implemented the guided pathways model.

According to RCC President Michael Baston, the Title V grant the college received was used to develop a guided pathways model through which students will be recruited into one of five new schools: the School of Nursing, Health and Wellness; the School of Business and Professional Studies; the School of Education and Social Services; the School of Arts and Humanities; or the School of Science, Technology, Engineering, and Mathematics.

Baston, who serves on the board for the State University of New York Guided Pathways Project, said the model ensures that students have a structured academic path and support services, which will allow them to further their career and academic goals.

Under the model, for example, a student would not be required to take algebra if his or her major or intended career after graduation is better suited for statistics, said Baston.

“We want to make sure we have all of the programs that are aligned to the kind of general curriculum that will be transferable for students if they are transferring or will help them build skills that will enable them to be successful going into the work field,” Baston said.

According to Baston, the guided pathways model will be implemented in the fall of 2020.