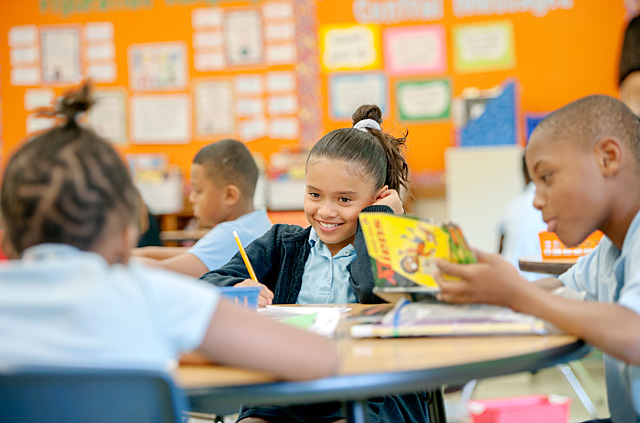 The oldest charter school in Rochester is now in its 15th year and has achieved state test scores significantly higher than schools in the Rochester City School District, said Julio Vázquez, head of Hostos’ board of directors.

The school would like to expand, but its plans to do so have been hampered by funding and facilities inequities that continue to have a negative impact on charter schools, according to school officials and an organization that filed an ongoing lawsuit against New York over the alleged inequitable funding.

Charter-school students statewide receive $5,232 less per student than children in traditional district schools, according to information from the Northeast Charter Schools Network (http://bit.ly/1D8W3jb), of which Vázquez is a member. This disparity is much worse in western New York, the network stated on its website. Vázquez added that charter schools in this area receive about $6,000 less per student.

Additionally, most charter schools, and all western New York Charter schools, have to pay facilities costs to cover such expenses as rent and utilities, according to the Northeast network. Even if the school received $1,000 more per student for facilities expenses, Vázquez said that many of the funding challenges for future expansion at Hostos would be solved.

Hostos would like to obtain for free, lease or purchase the Lincoln School No. 22 building on nearby Zimbrich Street and create a high school component by next year. The K-9 school hopes to add 1,000 students in the next seven years, Vázquez said.

"The need is there," he said, with parents asking for a separate middle-school and high-school facilities. "We have a long waiting list."

The school — which began operating in 2000 on property owned by Ibero-American Development Corp — first expanded several years ago. That’s when it began leasing the former Our Lady of Perpetual Help School on Joseph Avenue after reaching capacity at its original location adjacent to the intersection of Clifford and Hudson avenues. Three years ago, the church on the property closed and Hostos purchased the entire campus, explained Jeff Halsforder, the school principal.

The School No. 22 property was to be turned over to the city at the end of June, Vázquez said, and the Hostos school must wait until the city council goes through a request for proposals for the property’s redevelopment. A city official said the RFP process is underway.

"The building is a school and should be maintained a school, especially if a successful charter school needs the space," Vázquez remarked.

The Hostos school’s success is validated in its standardized test scores, he and Halsforder said. Last year, 49 percent of its students passed the New York state exams in math, compared to 7 percent in the Rochester City School District, Halsforder said. While the passing rate on the English test was not where the school would like it to be at 20 percent, it was still significantly higher than the district’s 5 percent rate, he said.

The math scores "were some of the highest in Monroe County, not just Rochester," Halsforder said. And its science and social studies scores are in the 90 percent range, he and Vázquez said.

Those statistics are significant considering the school’s population reflects the demographics of the city school district, with more than 80 percent of the students receiving free or reduced-price lunch, Halsforder added.

"Our philosophy is poor kids can learn and compete with middle-class kids if you do certain things," including an expeditionary teaching model, small-group instruction and such extra supports as tutoring, said Vázquez.

The school is struggling, however, with the implementation of the Common Core curriculum, as other districts are, he said. And the Hostos school is unique in that students learn those subjects in both English and Spanish, Halsforder added.

"The Common Core is not meant for dual-language (schools)," he said, adding that teachers have had to translate the curriculum, which has added a layer of work for his staff.

But that dual-language model is one of the aspects that attracted Jamie Trostle to the school; her daughters will enter sixth grade and third grade in the fall. She said that students’ skills in their second language are brought "up to speed" as they move into core subjects being taught in both languages.

"That they do it (language acquisition) that way is pretty amazing," she said.

The extended day also offers working parents a valuable option, she added. Students attend school from 8:30 a.m. to 4 p.m. but begin their school day at 9 a.m. and have extracurricular activities toward the end of the day, Trostle explained.

She is hopeful that the school will be able to continue expanding, Trostle said. While she has spoken to her daughters about other opportunities as they get older, Trostle said that she would prefer that they remain with the community that they’ve established at Hostos.

If Hostos’ officials are able to obtain the School 22 property, students would be moved out of the original location on Clifford Avenue, Vázquez said.

Plan B would include converting and adding on to the Joseph Avenue campus’ church and rectory space or tearing them down and building something new, he added.

"That would be a very big expense," he remarked.

Until the state lawsuit is resolved, the school may have to turn to organizations like the Turner-Agassi Charter School Facilities Fund that provides grants to charter schools across the country. Hostos officials connected with Turner-Agassi representatives through the PUC Achieve Charter School.

A petition also has been created to help parents be more involved in the issue and advocate for the needs of charter schools, said Vázquez. A recent state renewal emphasizes why schools like Hostos should receive equitable funding, said Vázquez and Halsforder. The report states that Hostos is doing "what charter schools should strive to be," noted Halsforder.

"And we’re doing that with … less," added Vázquez. "If we had at least 75 to 80 percent of the public school funding, (imagine) what we could do."