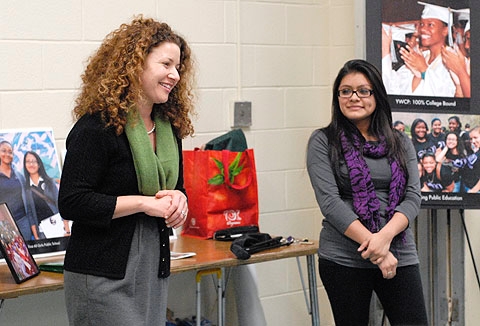 A native of Mexico, she moved to the United States with her mother when she was 11. When she was accepted to the Young Women’s Leadership School in New York City’s East Harlem as a ninth-grader, Cosme could not even speak English fluently.

"A month after, I was speaking English," she said. "They really contributed to my success."

The support she received at school put her on the right track, and she not only completed high school but went on to graduate from the University of Rochester, Cosme said. She also hopes to become a counselor some day and help teenagers realize their college dreams, and is currently applying for graduate school, she added.

Cosme has been attending information sessions hosted by school parent groups or other agencies with the administrative team of a new all-girls public school — the Young Women’s College Prep Charter School of Rochester — slated to open this fall. The only criteria is that the girls who apply live in the city.

"We love to bring our former students with us," said Laura Rebell-Gross, who is the school’s cofounder. "No one speaks to our mission and success as our graduates do."

While she did well in high school, college might have remained out of her grasp if a counselor at the Young Women’s Leadership School in East Harlem had not walked her and her mother through the application and financial aid processes, Cosme said during a recent interview at Ibero-American Action League. The league plans to help with outreach and recruiting volunteers for the new Rochester school, said Hilda Rosario Escher, Ibero’s president and chief executive officer.

"It’s another opportunity open for our young ladies," Rosario Escher added. "Education is the key out of poverty."

Rebell-Gross saw the opportunity to offer the first all-girls public school in Rochester after years of work as a literacy coach at Monroe 1 BOCES. She is well-versed in the all-girls-school concept, having joined the staff of the Young Women’s Leadership School in East Harlem in 1998. That school had opened two years earlier as the first all-girls public school to open in the United States in three decades, she noted.

The East Harlem school, which is not a charter school, has an "incredible rate of success," she added, with 100 percent of the graduates going on to college. And a large majority of those students are first-generation college students, which is similar to many of the Rochester’s student population, Rebell-Gross remarked. She served as chair of the school’s English department and an 11th-grade teacher.

"Being at that school was a dream job," she said. "When I came to Rochester, I saw that many students here face the same adversity."

Rebell-Gross said she hopes to replicate that success in Rochester with the all-girls concept. Research supports the single-sex strategy, including a Cambridge University four-year study that showed that the model boosted boys’ performances in English and foreign languages and girls’ performances in science and math, according to the National Association of Single-Sex Public Education at www.singlesexschools.org/evidence.html.

Aiming to replicate the kind of success she was a part of in New York City, Rebell-Gross cofounded Young Women’s College Prep Charter School of Rochester with Brooke Stafford-Brizard, wife of former Rochester schools superintendent Jean-Claude Brizard. The two of them wrote the application for the new charter school, and Stafford-Brizard continues in the role of a board member for the school’s foundation, which will serve as the bridge between the school and the community.

The Rochester school will have a memorandum of agreement with the Young Women’s Leadership Network, which was created to offer inner-city girls the option of single-sex schools that previously were only available to affluent families, according to information at http://ywlnetwork.org/about_what2.htm#1. It will be one of 12 such affiliate schools that also include sites in Chicago and Baltimore. The network’s schools are located in Manhattan and East Harlem with two in Queens as well.

The Young Women’s College Prep Charter School board is still working on a location in Rochester, but the plan is to "incubate" for three or four years in a temporary site until the board finds the ideal building, Rebell-Gross explained.

Upon receiving approval from the state’s Department of Education last fall, however, the board moved quickly to hire Jennifer Gkourlias as principal, Rebell-Gross added.

Gkourlias is a Rochester native who has worked as an English as a second language and social studies teacher for the Rochester City School District. She also created a dual-language program in the Greece Central School District.

Gkourlias said that she stresses the need to set high expectations for all students, and expects girls at the new school will not only meet them but exceed them with support and guidance from staff. The prep school also will provide a longer day, Saturday hours and summer school, she said.

"This is a very special community" of Rochester residents, Gkourlias noted. "They have to be custodians of this community."

The girls’ college prep school will begin with 75 spots open to seventh-graders, Gkourlias explained. The plan is to add a grade every year through 12th grade. If more than 75 girls apply for admission, a lottery will be held in April.

The girls who are selected to attend the new school also will be placed in small "advisement" groups of 12 students or fewer who are matched with a staff member to "create a contact point for young people," explained Gkourlias. That kind of setting provides the opportunity to help girls deal with such topics as self-esteem, body image, advocacy and leadership.

"The point of the leadership network is to build leaders," she said. "But it’s not just about developing self-esteem, it’s about putting in the path of young people as many role models as possible."

And the bottom line is that the school will create a covenant with the families that enroll their children, and the staff will do everything possible to ensure those children continue on to meet higher education goals, Gkourlias said.

"I believe in kids," she remarked. "I believe they can and must go to college."