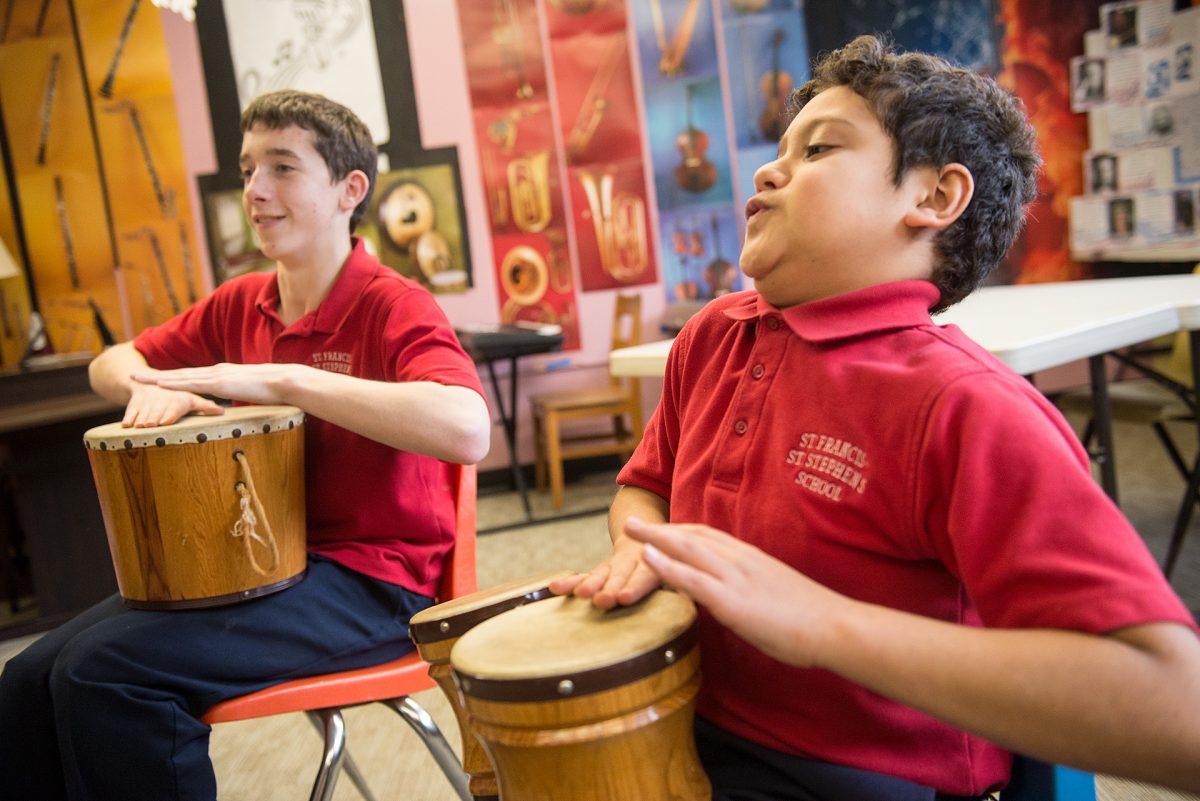 Several schools around the Diocese of Rochester are starting to see the fruits of their efforts to boost Latino student enrollment.

Such outreach worked for Maria Garcia, the mother of two daughters ages 9 and 12.

During the Spanish Mass at Rochester’s Our Lady of the Americas Church about a year and a half ago, Garcia heard a presentation from Principal Jacqueline Senecal about St. John Neumann School, which is part of Rochester’s Peace of Christ Parish.

At the time, Garcia’s younger daughter was struggling with bullying issues at a local charter school. She said she had never considered Catholic school for her children because she didn’t think her family could afford it. But upon further discussion with Senecal, she gave St. John Neumann a try.

Since enrolling fourth-grader Alani more than a year ago, Garcia also has enrolled her older daughter, Aleyshka, at Siena Catholic Academy in Brighton.

“They offered a great financial aid package, which I was very surprised,” she said of St. John Neumann and Siena. “But most importantly, I appreciated her (Senecal’s) empathy, consideration and understanding of my personal difficulties going on with my family.”

As a native of Honduras, Senecal said she personally feels an obligation to help families like the Garcias see the value of a Catholic-school education. About 30 percent of the 116 students currently enrolled at St. John Neumann are Hispanic, she said, and the percentage has risen every year since she began as principal three years ago.

Since becoming principal, Senecal has helped to promote the school by making presentations during Masses at Peace of Christ Parish as well as during Spanish Masses at St. Frances Xavier Cabrini Parish.

As a native Spanish speaker, Senecal said she assists with translation for families and with completing paperwork during the enrollment process. She also empathizes with anyone who struggles to learn English, recalling how she had to learn the language upon arriving in the United States as a child so she could make friends and succeed in school.

Having a native Spanish speaker at Peace of Christ has been beneficial to students and families as well, she said. Father Carlos Sánchez, a native of Colombia, has made presentations at the school about his own background and vocation, Senecal said, explaining that his example has taught students the value of being bilingual.

“The kids loved it,” she said of his visits. “One of the things they were amazed by is that he came here and he already knew how to speak English.”

Father Jorge Ramírez is having a similar effect on students at Holy Cross School in Rochester, said Principal Mary Martell.

He not only is teaching Spanish to the school’s sixth-grade students, but he also is sharing information about the school with the Hispanic communities at other local parishes. And he is enriching the students’ cultural knowledge, she said, noting that in December, he led a celebration at the school of the traditional Colombian holiday “Day of the Little Candles.”

After attending the University of Notre Dame’s Latino Enrollment Institute in 2016 and 2017, Martell also has worked to include more cultural interactions at Holy Cross School. For example, she noted that Masses at Holy Cross now include many parts sung in Spanish, and registration materials are now available in both English and Spanish. Martell said she also is working to establish a “madrina” (godmother) for the school to help with outreach.

To offer more financial assistance, she also is working with Hispanic community members to establish a Latino student scholarship through the diocese, Martell added.

The benefits of such outreach are paying off, with Hispanic student enrollment doubling from 24 to 52 students from 2013 to 2017, according to Holy Cross data.

Enrollment of Hispanic students at St. Francis-Stephen School in Geneva, however, has yet to experience such an increase, said Principal Mary Mantelli.

Hispanics total about 13 percent of Geneva’s population, while they represent only about 7 percent of the school’s 119 students, Mantelli noted.

“This has been an area of concern for me in our school,” she said. “I would very much like our school population to be representative of the diversity in our community, but that is not the case at present.”

To raise awareness about the school among local Hispanics, she has collaborated with Sister of Mercy Kay Schwenzer, pastoral minister to Our Lady of Peace Parish’s Hispanic parishioners. Mantelli also has inserted copies of the Spanish version of the school’s monthly memo series, “Helping our Children Learn,” into the Sunday bulletins distributed after the Spanish Mass at St. Francis de Sales Church, one of Our Lady of Peace’s worship sites.

“So far, these efforts have not been particularly fruitful. However, I am hopeful that with continued outreach, in time, we will see a better representation of our Hispanic families in our school,” she said.

As part of those continued efforts, Mantelli said she recently took part in the V Encuentro at the diocesan level and plans to represent the diocese’s Catholic schools in the V Encuentro at the state level. Parish and diocesan encuentros have taken place as part of the church’s efforts to raise awareness of the gifts of Hispanic ministry and encourage intercultural interaction. A national encuentro will take place in Texas this fall.

“I want to help ensure that the importance of the role of our Catholic schools in meeting the needs and desires of Hispanic parishioners is included in our national plan of action,” Mantelli said of the encuentro process.