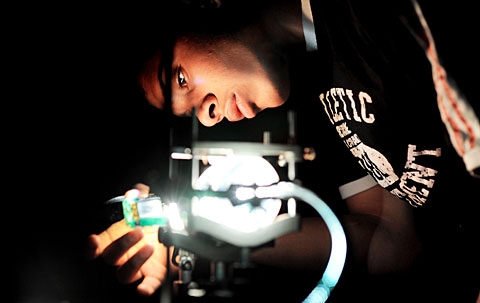 BRIGHTON — When Paul Conrow considered offering an optics program to his East High School students, he thought it would be an opportunity to also make eyeglasses for other students in need.

But when he met Thomas Battley, Rochester Regional Photonics Cluster’s executive director, he said that he realized this kind of program could be so much more.

Together, they created the Summer Optics Sizzlers program in partnership with Monroe Community College, and Battley said that he immediately admired Conrow’s passion for science and wanting to help his students.

"When you have a good, dedicated teacher willing to go the extra mile like Conrow, the kids really shine, and they showed it," Battley said.

The camp, which is now in its second year, took place the last week of June. Based on feedback from students last year, organizers expanded the camp from three to four days, added Battley, who said that the camp also is a response to what he has heard from industry executives about the great need for more optics employees.

Even President Barack Obama has credited the photonics industry with creating future economic prosperity, according to an article on the photonics website optics.org.

"There’s a national shortage," Battley said. "We read in the paper about the economy being dismal and that nobody can find a job. But if somebody has an interest in this industry and any kind of aptitude, they’ve got a job. … And this (group of students) was a talent pool that was being completely overlooked."

In fact, when the first group of students walked into the camp last year wearing low-hung pants and sporting tattoos, Battley himself was slightly dubious how it would all work out.

The students not only grasped the high-tech concepts in a very short period but also were able to present them well in a PowerPoint presentation to camp organizers and industry representatives, Conrow said.

"A big component of the camp is that kids had to communicate what they did," Conrow noted. "Regardless of what career path they go into, it’s a pretty good experience for a kid to present in front of a dozen adults."

Gualberto "Rakym" Gúzman said that the camp offered such a positive experience that he would now like to study optics at MCC. The 17-year-old Rakym was one of 16 East High students who took part in the Summer Optics Sizzler camp on the college’s East Henrietta Road campus.

"I loved the camp," Rakym said in an e-mail. "I learned so much … that I will definitely be able to use in the future. The instructors were very understanding to all questions and that we were very new to these concepts. I would definitely recommend this to my friends."

Battley said that students learn how light and optics work in such industries as medical products, display engineering, infotonics and defense.

This year, Conrow served as team leader for one of the groups of three students that worked on projects. His students took lenses and a $10 light-up key chain that anyone can buy in a store and created an LCD projector that would project on a 48-inch screen.

The camp also included presentations from guest speakers, such as heads of local companies and MCC graduates.

"We are giving kids … a feel, a taste for real jobs in a real industry right here in Monroe County," Conrow added.

The program, in fact, is working so well that organizers hope to add more students from other schools, and even other school districts, to expand that pool of potential employees in the field, Battley and Conrow said. Battley added that Rochester is unique in that students may obtain an associate’s, bachelor’s, master’s degree or even a doctorate in the optics field. MCC’s support of the program — by providing volunteer instructors and classroom space in its optics and infotonics laboratories — is mutually beneficial, as the college offers a two-year optics-technology degree and a certification program, explained Ross Micali, the camp coordinator for MCC. The college also offers a two-plus-two program (a program that guarantees transfer to a participating four-year college) in partnership with the University of Rochester, he added.

"We want to get the pipeline started for a career path from high school to MCC to going to work or to the UR program," he remarked

Also in partnership with MCC, East High is in the works of unveiling a dual-credit program beginning this fall whereby its students will obtain college credit for courses taken at the high school, Conrow explained. East will serve as the pilot program, which he hopes will expand as well, added Conrow, an East High graduate who has taught chemistry and physics at the school for the past decade.

"This is the century of the photon," remarked Battley, quoting the T-shirt students wore during the camp.