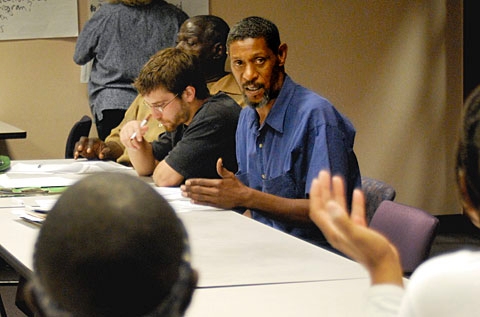 ROCHESTER — The call for parent involvement in the education of city students is getting a little louder.

The Community Education Task Force (CETF) has spent the past year and a half putting together a group of parents, family, guardians and community activists to develop a unified and independent voice to present concerns and issues to the Rochester City School District. The group seeks to be part of the process before decisions are made — such as potential school closings — to eliminate the crisis mode that has been in operation in recent years, CETF members said.

"Our primary goal is to assist in the education of all of our students," explained Mary Adams, a parent and one of the CETF founders. "Public education is being distorted instead of being the great equalizer of all people."

That distortion includes the profiting of corporations that are solely interested in selling products — testing, evaluations, curriculum materials — instead of improving schools, Adams remarked during an interview July 19. CETF, however, was initially created to oppose mayoral control of schools as proposed by former Mayor Robert Duffy in January of last year, she said.

While CETF members felt that mayoral control was not the way to truly reform urban school districts, they also realized that the group needed to develop its own ideas about reform, Adams explained.

"We said to ourselves, ‘What do you we stand for?’" she added. "Clearly, our schools are in trouble. What is our positive agenda, because you cannot have an organization that is just opposed to things."

In the fall of 2010 CETF members drafted a mission statement with eight principles, including establishing community involvement, demanding accountability and reforming the standardized testing system, Adams noted. Her husband, Ricardo Adams, said that the process took about three to four months and included extensive study sessions.

To further develop community involvement, CETF held a summit this past spring to create awareness among district families and all community leaders about the family/community initiative, Adams said. During one of the new parent group’s monthly meetings, a new name for the CETF’s off-shoot group was approved — United Parent and Community Organization.

The group’s mission is to promote communication, foster "mutual aid" among city school families and provide a venue to assert community control in district schools for "significantly improving education for all … students," according to the minutes of the United Parent and Community Organization’s July 14 meeting.

Walter Briggs, whose daughter attends School 39, said that parents just don’t want to be shut out of decision-making by administrators and the school board.

"I hope the message that gets across is that we are not trying to take over," he added. "We just want to get involved in everything that they’re involved in. … We just don’t want them to shut us out. We all can work together. We all can come up with a solution."

Interim Superintendent Bolgen Vargas believes that boosting community involvement is a win-win situation for students. He attended one of the parent group meetings this past spring.

"I happen to believe that unless … parents, guardians and adults (are) involved and interested in a child’s education in a meaningful way, we won’t be able to make progress," he said. "If a child has people that care about them in multiple places — including school, community, their houses, neighborhoods, churches, and synagogues or mosques, everybody will win. And that will advance academic achievement for students."

But members of this group cannot just talk the talk, he added. They also should spend time with their children, make sure students do their homework and go to bed early as well as take them to libraries and parks, Vargas noted. He welcomes the challenge that the new group may bring, but it must be done in a constructive manner, he emphasized.

"When the school is not doing its job, parents should come to school and contact the school and advocate (for their children)", Vargas said.

Mary Adams said that the group also is not seeking to replace parent-teacher organizations, which she said serve a purpose but tend to align with the district.

The group also seeks to increase its Latino family participation, which thus far has been very small, Adams said. She noted that the group has done outreach and when working one-on-one finds that Latino parents want to be involved, but they have been less likely to attend the meetings. She said that she would like to see that pattern change.

EDITOR’S NOTE: For more information about the United Parent and Community Organization, call 585-317-2367 or click here.