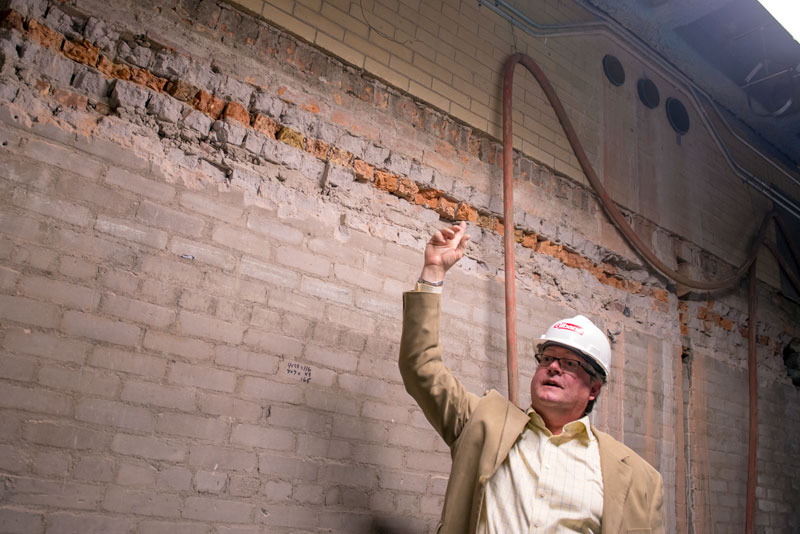 Project Manager Rob Skeele stands in what was once the deep end of the Monroe High School swimming pool, now removed to house the schools new cafeteria on the floor above, Feb. 15.

ROCHESTER — James Monroe High School will serve as a flagship project for the second phase of a Rochester Schools Modernization Program underway for buildings throughout the Rochester City School District.

Phase 1 of the entire RSMP project cost a total of $325 million, which included work on Monroe and 11 other city schools, according to district information. Phase 2 will cost an estimated $435 million and includes renovation of 12 city schools in addition to the work at Monroe.

The work is overseen by a Joint Schools Construction Board comprising seven officials from the district and the city of Rochester administration, according to information at https://rcsdk12.org/rsmp.

During a Feb. 15 tour of the Monroe building, Rob Skeele, the project manager who led the tour, said completing the Monroe project is the linchpin for Phase 2 of the RSMP. It is the largest undertaking for the five-phase project, which is a partnership between the RCSD and the city. Construction at Monroe — which is 273,000 square feet and includes about 250 rooms — began three years ago, he said.

Allen Williams, chairman of the Joint Schools Construction Board, said students were originally slated to move back to Monroe last fall from their temporary location at the former John Marshall High School. Due to the additional work that needed to be completed as part of the Phase 2 construction, the renovation team and construction board members met with parents and other community stakeholders to explain the need to postpone the move-in date to this September, he added.

Safety was paramount to holding off on a move-in date, as an old gymnasium was gutted to make space for a new cafeteria and kitchen area in addition to building a new athletic facility and adjacent field for sports teams, noted Williams, who also is director of special projects for Rochester Mayor Lovely Warren.

The construction board preferred to not have this ongoing construction work taking place with students and staff in the building, he said.

The Monroe building required a complete gut job of the interior, and hundreds of miles of new electrical wire were laid out throughout the structure, all of which was part of Phase 2, Skeele said. But that work couldn’t begin until Phase 1 was complete, which included stabilizing the exterior and making a number of upgrades such as new roofs, brick and other structural repairs, he added. Cost of the “bricks-and-mortar” improvements totaled $77 million without accounting for other costs such as architectural, engineering and legal services.

Monroe’s Phase 2 work involved reconfiguration of many parts of the building to add 44,000 square feet of space, refurbishing floors and walls and installing technology in all classrooms such technology as wall-length white boards and 107 80-inch television screens, Skeele explained.

“You’re getting a 1921 structure that has been converted to state-of-the-art (building) … while maintaining the architectural integrity of the building,” he said.

Reconfiguration of the school also included building separate corridors, doors and gym for the middle school, he said.

Creating opportunities for Monroe students to develop school spirit and identity was another key component for the project that will be achieved through the addition of the sports complex, he said. In recent years, Monroe students played on other teams around the district, he said. The complex also will serve as a community resource, he said.

Community members also will have access to the sports complex and common space in the building via a new entrance on Averill Street, noted Pépin Accilien, vice president of Savin Engineers. On Feb. 15, work was being completed on the community space area in the basement, which also will house offices for agencies that work at Monroe in partnership with the school district, such as Ibero-American Action League, Skeele said.

Luis Burgos, Ibero’s youth services director, said during the site visit that he was happy with the community space. He agreed that school spirit will grow once students see the new building, especially those who started as freshman and will return as seniors.

“I believe that the building will have a transformational effect on the students,” said Burgos, who attended Monroe’s junior high school bilingual program.

“When it comes to youth development, facilities are the base of the pyramid for program quality. Not only will the students be safe, comfortable, and equipped for learning, they will have a tremendous boost to their sense of self-esteem because of the building’s state of excellence.”

EDITOR’S NOTE: A progress report on the James Monroe High School renovation project will be presented at a community meeting on April 17 at 5 p.m. at the John Marshall High School at 180 Ridgeway Ave. in Rochester.