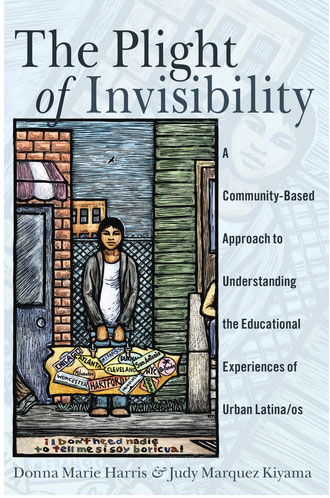 A seven-year journey to determine why Latinos continue to face obstacles to academic success and what can be done to help them in that struggle has culminated in the release of a book.

That study drew on interviews with 95 students and 44 family members from the Rochester City School District that led to the in-depth investigation and analysis contained in The Plight of Invisibility: A Community Based Approach to Understanding the Experiences of Urban Latinos/as, which was released last month.

The authors talked about the book during an April 9 press conference at Ibero’s Early Childhood Center. They also led a community conversation that same day on the issues highlighted in the book.

Kiyama said that the book has several purposes: documenting the issues, illustrating community activism, and serving as a tool for community engagement and professional development.

Latino students who were part of the study faced language barriers, transition difficulties, sterotypical misrepresentations of their culture, and a lack of resources and support.

Typical transition factors affecting student progress would be acquiring friends, navigating new classrooms and questions of identity, according to the book. For Latino students, those factors are compounded by immigration/migration status, linguistics, acculturation, adaptation and socioeconomic factors, the authors said.

"We need to provide the necessary resources (for Latino students) to pursue educational pursuits," Kiyama said.

The professors and others involved in the project also studied the school and learning factors affecting the Latino drop-out rate, which include school safety and violence, courses, classroom and suspension policies, and teachers, they said.

"The key theme … is equitable access to academic resources and programs," noted Harris.

Such equity would not only include access to critical programs like bilingual education, she said, but also access to high-achieving programs like Advanced Placement courses, which are sporadic in the district’s 18 high schools, she said. Limited access means an underrepresentation of Latinos taking such courses, Harris remarked, with no Latino students taking AP math courses.

"Our children don’t lack any potential," Rochester Superintendent Bolgen Vargas said during the press conference. "They are as brilliant, smart and capable as any group of students. … What there is, is a lack of opportunity."

Rosario Escher noted that the book is not the end of the conversation but the continuation of a decades-long fight to meet the needs of Latino students.

Parent Gloria Sabastro said that she feels proud that this book is making a statement about the needs of the local Latino community and has hope that it can make a difference in improving Latino student success.

She also hopes that it will be translated into Spanish so she can better understand it, since English is her second language. Kiyama said that she and Harris would notify the publisher of requests to have the book translated.

As head of the district’s bilingual council, Sabastro said that she also hopes the book will prompt more families to get involved in their children’s education.

"The parents need to see the leadership (potential) in themselves," she said. "That is what gets things done."

The book is deja vu for Father Laurence Tracy, who has been fighting for bilingual education services for Latinos in the city since the late 1960s and was part of the AHORA report from 1986 that assessed the community’s education, health and economic well-being.

To improve achievement for these students, the community and the district need to do as the 1986 report and the book advise, he said.